What happens to used motor oil after it leaves our cars? That's a question that many of us don't stop to ask, but hopefully the answer is that it is taken to a recycler to be cleaned for future reuse. However, even if the oil handled in the most responsible way possible, chances are that a bit gets dribbled on the ground during the transfer from car to container. Places such as car dealerships and body shops will likely see a number of these dribbles over the years, potentially leading to an unhealthy buildup of oil residues in nearby soils. Some of this buildup may remain local, but some can dissolve in water and make its way into the tissues of plants and animals--where the heavy metals it contains can wreak havoc on their health and fitness. 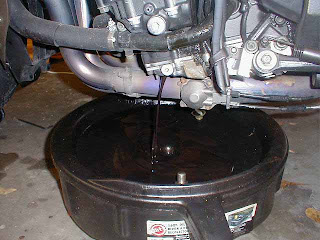 
There are a number of options available for cleaning up oils before they can do too much damage, but these may have drawbacks: Some are quite expensive, others may have negative ecological side effects, and still others may simply remove oil from one location to another. One of the most promising genres of treatment is bioremediation, or the use of microorganisms that metabolize pollutants and release harmless end products in their place. This process can be facilitated by encouraging the growth of indigenous bacterial species (biostimulation), adding new species to the contaminated site (bioaugmentation), and/or altering environmental conditions to speed the growth of bacterial colonies. Although this sounds fairly straightforward, it is still necessary to identify the conditions under which microorganisms can most efficiently clean contaminated soils.

This was the goal of a team of Nigerian researchers who recently utilized aerobic fixed bed bioreactors to investigate the efficacy of six different bioremediation techniques. Their findings, published in the most recent edition of Bioremediation & Biodegradation, indicate that biostimulation may be the way forward--though they admit that further work will be necessary to hone their "recipe" and develop a larger-scale system for decontaminating large amounts of soil. 
The team's research utilized samples collected from a Nigerian auto repair shop--one of several locations surveyed in a preliminary study exploring the "similarities and major differences in physicochemical and microbiological characteristics" of polluted soils. All samples were moistened with water, but other aspects of their preparation differed markedly. Some were subjected to heat sterilization in order to kill off endogenous (Bacillus subtilis and Micrococcus leteus) bacteria, others were given a dose of exogenous bacteria (B. subtilis and Pseudomonas aeruginosa), some received nutrient-rich fertilizers, and others experienced some mixture of these treatments.

The researchers prepared a total of six samples, all of which were placed in separate aerobic fixed bed bioreactors--or, in other words, oxygen-containing containers that remained stationary for the duration of the 70-day experiment. Every 10 days, the team collected measurements reflecting soil conditions, bacterial activity, and success of the bioremediation effort. While readings on temperature, moisture content, and pH were all useful for confirming that the bioreactors were facilitating the optimal environment for bioremediation (26-32 C, 10-20% w/w, and 5.5-8.5), perhaps the most exciting results were those indicating the extent to which the bacteria actually removed oil from the soil.

(Example of a bioreactor. Image courtesy of Wikipedia.)


Petroleum hydrocarbon levels decreased in all six treatment groups, from a range of 169-326 down to 54-129 mg/kg dry weight; this represents a change of 49-72%. The greatest decreases were seen in treatment group 3 (soil + heat sterilization + water + exogenous bacteria) and treatment group 6 (soil + water + two different fertilizers), while the least amount of change was observed in the control group (soil + water + heat sterilization). Motor oil can have fairly low levels of petroleum hydrocarbons, and so a better measure of bioremediation success is change in oil and grease content. When the researchers examined this metric, they again found that treatment group 6 was a top performer, experiencing a 75% reduction (38,592 to 9,830 mg/kg dry weight) over the course of the study. For all soil samples, speed of removal was highest during the first five weeks of the study, after which it slowed markedly.

Based on their findings, the research team concluded that a full-scale bioremediation technology should involve the conditions found in their sixth treatment group. However, they also suggest that they might be able to further optimize their method by adjusting moisture content and, especially, experimenting with different types of fertilizer; while they dosed their samples with NPK and KH2PO4, alternative varieties might improve the efficiency of hydrocarbon removal.