How much does tourism help fund bird conservation? Given the continuing boom of the "avitourism" industry, this sounds like the sort of question to which both environmentalists and entrepreneurs should know the answer. However, while researchers have performed calculations investigating the availability of tourism revenues for mammal and frog conservation efforts, nobody has explored similar trends in other taxa--or, to be more accurate, nobody had explored those trends until a group of Australian scientists recently decided to crunch the relevant numbers. The results of their analyses were reported earlier this month in the journal PLoS ONE. To make their study question a bit more manageable, the researchers focused on only a subset of all the 10,000-some extant bird species in the world and on only a portion of all the habitats in which these animals live. First of all, the researchers explored statistics relating only to the 562 species currently classified as Critically Endangered (CE; 190 species) or Endangered (EN; 372) on the IUCN Red List of Threatened Species. They also only counted tourism revenue generated by activity in one of the 120,000 or so protected areas (or 13% of all terrestrial habitats) established around the world. Cumulatively, these techniques should result in a conservative estimate--or a worst-case scenario--of how much the tourism industry actually contributes to avian conservation.

Revenue data were obtained from a variety of financial records published by individual parks and agencies. These allowed the researchers to calculate R, the proportion of park funding generated by tourism activity. This value was calculated across entire countries to account for the fact that conservation agencies often distribute funds to multiple different locations. However, the scientists also calculated what proportion of each individual park's revenue was generated by tourism. This was entered into a relatively simple equation (also incorporating data on the size of birds' global populations and the size of their populations within protected areas) that yielded T, the proportion of each bird species' global population that is protected by tourist activities. The financial contributions of tourist activities varied hugely between protected areas. Some sites received no revenue from tourism, while other sites were completely funded by visitors; R values generally fell somewhere between 5 and 80%. Private reserves were particularly likely to earn a substantial portion of their income from tourists. Protected areas in African countries had the greatest tourism support (36-81%), while those in the most developed countries had the least (generally <15%). The low R values calculated in more developed areas likely reflects the fact that the governments of these nations tend to subsidize conservation work with earnings from federal taxes, while developing countries tend to be much more reliant on tourism earnings.

Population data were not available for all 562 CE and EN bird species originally selected for the study, but the authors were still able to investigate trends associated with 131 local subpopulations of 91 species. Calculations revealed that tourist activities helped support the protection of anywhere from 0-64% of each species' global population. A handful of species were at either end of the tourism support spectrum, receiving either no help from visitor revenue (n = 9) or having over a fifth of their global population supported by tourism (n = 8); the bulk of species (n = 50), however, fell somewhere in between these two extremes. Notably, T was significantly greater for CE species than EN species, indicating that tourism revenues are extremely valuable for helping preserve the most at-risk birds. Overall, the study reveals a number of surprisingly low R and T values. While it may be tempting to interpret these as an indication that tourism revenue is not generally that significant, it is important to note that the researchers identified 41 species for whom >10% of the entire global population relies on tourism revenue; decreases in visitor spending could have catastrophic impacts on the protection of these birds. Perhaps even more importantly, the countries with the highest R values are developing nations that likely do not have alternative sources of funding to devote to conservation efforts. In these nations, tourism revenue is probably a lifeline not only to threatened bird species, but also the locals who make a living by catering to visitors. It is also important to keep in mind that ecotourism is still a growing industry, suggesting that, in some areas at least, R (and maybe also T) will continue to increase over time.

Of course, there are some drawbacks to relying on ecotourism to sustain conservation efforts. For one thing, an increased number of visitors can lead to a decreased quality of life for endangered animals, to the point that the gains in revenue may not actually lead to improvements in species numbers. Another issue is the unpredictable and volatile nature of the tourism market, which can be influenced by uncontrollable factors such as weather. In the future, the researchers hope to utilize more detailed and sensitive calculations that might potentially allow them to take these sorts of trade-offs into account in their models. 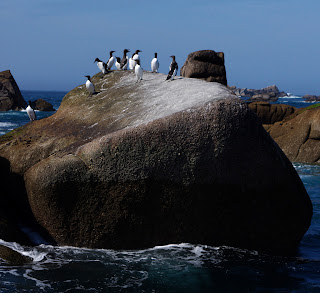 (Guillemots and razorbills in the Isles of Scilly, UK)

Perhaps a more important thing to focus on right now, though, is the authors' finding that 43% of their 562 focal species seem to exist wholly outside the boundaries of protected areas, and thus may receive no real conservation help at all. Of the species that are found in protected areas, there are a number that live in only a single preserve. Together, these results suggest that avian conservation efforts could be vastly improved, regardless of how they are funded. As we set out to rectify this problem, we might consider focusing on island habitats and wilderness areas found in South America; these are the two types of environment in which there appears to be the greatest need for increased habitat protection. As the authors point out, the large number of threatened animals living outside of formally protected areas also emphasizes the importance of generalized efforts to increase biodiversity, rather than action plans that are focused only on particular tracts of land.

---
If you enjoyed this article, visit the Anthrophysis Facebook page for more!

All photos by me; more can be seen on my flickr photostream.
Posted by Caitlin Kight at 15:05