Impacts of pharmaceuticals on wildlife

Pharmaceuticals have helped extend and improve the lives of humans and both wild and domestic animals, but researchers are increasingly worried about the effects that these chemicals could have on the wider environment. The compounds and their metabolites can be found in both terrestrial and aquatic ecosystems, in species great and small. Scientists have already documented several population declines linked to pharmaceutical activity, which raises an obvious question: What should we do to better understand--and potentially mitigate--the effects of drugs on wildlife and the ecosystems in which they live?

This question was the topic of a recent Research Fellow International Scientific Seminar funded by the UK's Royal Society. Scientists from a variety of fields met at the Royal Society's historic Chicheley Hall (Buckinghamshire) to think about what is already known, what needs to be explored in greater detail, and how all of this information might impact government policies in the future. The results of their discussion were then summarized in paper published in a recent edition of Biology Letters.

The researchers began by considering two pharmaceutical-wildlife interactions that have received quite a bit of press in recent years. The first is the feminization of male fish exposed to female hormones linked with hormone-replacement therapies and the birth control pill. Studies have shown that the fish are able to continue breeding, but at rates below those of normal males. This suggests that, over time, exposed populations might begin to die out. The second example described by the authors is the plight of Asian vulture species that have all but vanished as a result of widespread use of diclofenac, an anti-inflammatory and  pain-killer used in cattle. The near-absence of the scavenging birds in many areas has raised fears about potential water contamination, and has even impacted local burial practices (for a nice summary, see here). 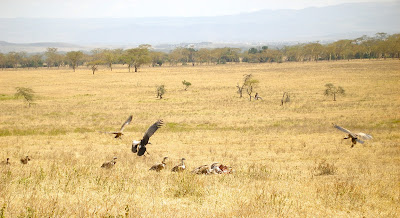 (Vultures at a recent lion kill. Image courtesy of specialagentCK)

Cumulatively, the patterns associated with these events show that pharmaceuticals can act on non-target species, ultimately affecting individuals, entire populations, and even whole ecosystems. According to the researchers, the next step is to understand the details associated with these patterns--specifically, to uncover the "exposure pathways". This will require compiling information about the chemicals themselves (how often are they prescribed? what levels of bioactive compounds do they produce? how long do these compounds persist in the environment?), about the wildlife that may ingest them (which organisms help the compounds enter the food web? do some feeding methods promote uptake? what do the drugs do to the animals?), and about the effects of the drugs on both individual species and entire ecosystems (are some species impacted more than others? is there bioaccumulation? how much intra- and interspecies variation exists?).

The researchers point out that our widespread use of a variety of pharmaceuticals means that most organisms and environments will be exposed not just to a single drug, but to a cocktail of chemicals that may interact in unexpected ways. To further complicate the matter, other environmental stressors (e.g., extreme weather or a dearth of resources) may influence whether, and how, pharmaceuticals affect wildlife. Our current understanding of these patterns is particularly scanty for terrestrial environments. The authors note that work in developing countries may be especially enlightening because these are areas in which pharmaceutical use is increasing at a rate that outpaces the establishment of infrastructure that can remove chemicals from the ecosystem.

(Improved water treatment facilities and/or protocols might be one way of limiting the movement of pharmaceuticals into sensitive wildlife and ecosystems. Image courtesy of Wikimedia Commons.)

According to the researchers, "an integration of diverse approaches is required" to tackle this complex topic. Although the research may not be easy, it is likely to be extremely useful; there are already a number of species known to be negatively impacted by the spread of pharmaceuticals into wild areas, and the authors predict that further work may explain additional population declines that are, for the moment, mysterious. With this information in hand, we could begin to develop targeted conservation/management plans, improved water cleaning practices, tighter pharmaceutical regulations, and perhaps even more targeted medications that are less likely to affect other species.