Discovery of the first evidence that early Europeans ate turtles

If you ask a random sampling of people to tell you everything they know about turtle consumption in Europe, they are likely to mention the popularity of turtle soup in England during the 18th and, especially, 19th centuries. Indeed, the most fashionable and prosperous of Victorian hosts served the dish to impress their guests. But it turns out that the practice of turtle eating dates back to long before the Victorians, and that it wasn't even first attempted in the British Isles. Rather, recent research has uncovered the earliest evidence to date of turtle consumption among humans--to approximately 1.2 million years ago, at the northern Spanish archaeological site of Atapuerca.

(A tureen of turtle soup.)

Although most scientists agree that humans were present in Western Europe as long ago as the Early Pleistocene (a subepoch that lasted from approximately 2.588 million years ago to 0.005 years ago), not much is known about what those ancient people ate. The remains of small animals have been found during archaeological digs, but they have mainly been treated as the product of carnivore activity or natural deaths. Despite the lack of direct evidence that turtles were consumed by humans, there was no reason to think that they would not have been--after all, they were in the right place, they were slow-moving, they didn't require specialized equipment to catch, and they were not likely to turn on a hunter and inflict serious damage. Furthermore, archaeological evidence indicates that early humans in both Asia and Africa ate turtles, so why wouldn't the same be true in Europe? 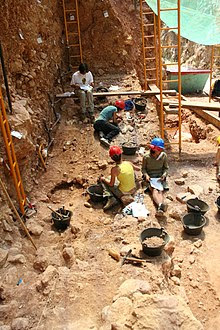 (The Sima del Elefante is one of many caves in the Atapuerca mountain range that contain remnants of early human life; because of the wealth of data in the region, it has been designated as a UNESCO World Heritage Site.)

The researchers separated all turtle remains from the many other materials--including a human mandible, some tools, and the bones of other animals--that could be found throughout the 16-meter-deep dig site. These were extracted from layers that were 8-12 meters below the surface, and, all told, amounted to 75 separate pieces. Seventy-four of the fragments were classified as belonging to the Hermann's tortoise (Testudo hermanni; this is a land-dweller, which most Americans would simply call a "turtle") and 1 of which was identified as a European pond turtle (Emys orbicularis).

Each piece was examined for incisions or scrapes caused during butchering. All told, 8 of the remains had clear marks--predominantly on the inside of the carapace, the rounded top part of the shell. These were likely made during efforts to cut through connective tissues and then scrape out the edible innards. It's possible that some of the unmarked turtles may also have been prey, but were butchered in such a way as to leave no trace.

The presence and distribution of the turtle remains suggest that these animals were a viable food source, but were probably only used sporadically since other food items were also available. Overall, this indicates that early Europeans, like their Asian and African brethren, were generalists--in other words, they were not picky eaters, and adapted their tastes to whatever the environment had to offer. This flexibility likely played a key role in their ability to spread throughout Europe and survive.

Thanks to the following websites for providing the images used in this post:
http://es.wikipedia.org/wiki/Sierra_de_Atapuerca
http://donmillereducation.com/journal/2010/09/11/the-weekend-trader-staying-nimble-turtle-soup/
http://www.treknature.com/gallery/Europe/Albania/photo201624.htm
Posted by Caitlin Kight at 07:44