People and wildlife often don't mix very well, with the result that shyer animals often actively avoid both humans and human habitats, leaving anthropogenic areas to the bolder, more adaptable species (such as raccoons, crows, or gulls). Researchers from the University of Debrecen, the Hortobagy National Park Directorate, the Finnish Crane Working Group, and the University of Bath recently collaborated on a project to determine whether similar patterns existed among individual common cranes utilizing stopover habitat in Hungary's Hortobagy National Park.

This area is the largest alkaline steppe in Europe and is not only a UNESCO World Heritage Site, but is also protected by the Ramsar Convention. The soil is highly basic and the region is characterized by grassland plains and a lack of trees, with the exception of those found near rivers and lakes; the semi-arid habitat is too dry to support a forest but not quite dry enough to be a desert. While this may not sound too hospitable to humans, it is very inviting to cranes who need a rest while flying from their Finnish breeding territories to their Algerian overwintering grounds.

Hortobagy is surrounded by 18 settlements that are home to anywhere from 1950 to 50,000 inhabitants. In order to measure cranes' tolerance of human presence, the scientists measured proximity of crane roosts to both tarmac roads and human settlements, as well as to human "perturbance," which they defined as the density of roads, settlements, and human population. Between 1985 and 2007, 273 crane chicks had been marked with unique combinations of colored leg rings, allowing researchers to follow the movements of individual birds both within a single migration event and between separate migration events over multiple years (1995-2007). 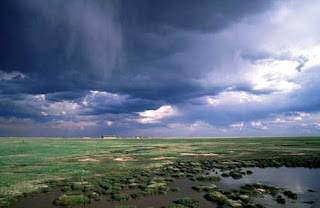 Within a single migration event, individual birds showed distinct preferences for particular types of habitat. The birds appeared to consider both proximity and perturbation when choosing where to go during their visit to Hortobagy; some individuals were consistently willing to settle nearer to people and roads, while others consistently avoided both. These preferences persisted across multiple years of migration, and there is even some evidence that they were influenced by the type of habitat that the cranes experienced in Finland during their "formative" nestling and fledgling stages.

Further work will need to be done to clarify why the cranes act as they do. Are they imprinted to certain levels of human disturbance as juveniles, and then deliberately seek these out later once they are adults? Given that they are in the company of their parents during their first migration, are the cranes simply following in the "footsteps" of Mom and Dad? Or might habitat preference have a genetic component?

It is interesting that the title of this report emphasizes "consistent avoidance" of human disturbance by the cranes, because the statistical analysis is actually geared towards measuring repeatability of any behavior. Thus, while some birds do consistently avoid anthropogenic structures and activities, others are also consistently willing to put up with it--which is an encouraging sign given the amount of habitat change projected for the future. Regardless, these findings clearly indicate that the "personalities" (e.g., bold or shy) of individuals and species are important to keep in mind when making management decisions; further, managers will need to consider conditions over a large geographical scale when developing conservation plans for migratory species.

Thanks to the following websites for the images used in this post: