As profiled in the last post, human noise has become a serious issue for animals that need to communicate in anthropogenic environments. However, vocalizations are not the only behavior that animals may alter in response to noise pollution. Just like people, wildlife may find loud levels of noise to be unpleasant or even physically stressful. Unlike us, they do not have the option of closing the window or wearing ear plugs, but they can relocate to a quieter spot—a behavior that has recently been observed in black-tufted marmosets (Callithrix penicillata) living in the Parque Municipal Américo Renné Giannetti in the Belo Horizonte city center of Minas Gerais, Brazil. 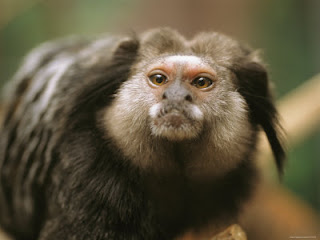 Researchers from the Pontificia Universidade Católica de Minas Gerais, the Universidade Federal de Minas Gerais, and the Universidade Federal de São João del Rei Rod studied the marmosets in an effort to investigate, for the first time, how noise might affect use of space in a terrestrial animal species. To do so, they collected ambient noise recordings throughout the approximately 45-acre park; measurements were made at multiple times per day over both weekdays and Sundays, generating noise patterns that reflected the long-term sound environment in the park. In addition to observing which areas of the park the marmosets were using, researchers collected information on how many plant species were available for the herbivorous marmosets to include in their diet. This was an important factor to consider because, under natural conditions, marmosets select their home ranges based on food availability. 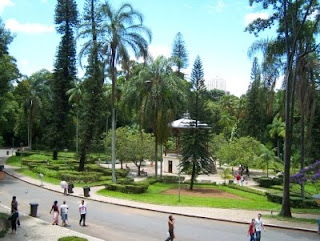 Unsurprisingly, the park was loudest at its boundaries, where it was bordered by busy roads. However, when the number of park visitors swelled over the weekend, noise levels increased in the center of the park, and across the park in general. On both weekdays and Sundays, marmosets were found significantly more often in quieter areas, indicating that they were actively avoiding noise. They even chose quieter home ranges when this forced them to utilize habitat with lower food availability. This raises the possibility that, over time, marmosets in noisy environments might have nutritional deficits, possibly leading to poorer body condition, shorter life spans, or lower reproductive success. If they want to improve the lives of their urban marmosets, perhaps the citizens of Minas Gerais can find a way to reduce noise pollution in and around the park, or implement a food supplementation program to improve nutrition in the park's quietest, most-used areas.

Thanks to the following websites for the photos used in this post: