Tough choughs put up with tourists in their territories

In order to examine the potential impacts of tourists, the researchers hiked a cumulative distance of 215 kilometers along 22 different trails in the Cantabrian Mountains. Whenever they encountered choughs along the trail, they performed an approach experiment in order to see how close the birds would allow them to walk before taking flight (“flushing”) to safer ground. The researchers also characterized the habitat and quantified the number of tourists within a 100-meter radius of where the birds had been sighted. Finally, they collected fresh droppings whenever possible, allowing them to quantify levels of stress hormones and fecal pathogen infection; both measures are an indication of the birds’ health and condition.

Both the Alpine and the red-billed chough flushed at shorter distances in tourist sites, indicating that they had become so accustomed to the presence of people that the birds felt comfortable letting them approach more closely. Although red-billed choughs were not seen to eat food scraps left by tourists, Alpine choughs were; interestingly, the latter species also flushed at much shorter distances when foraging in picnic areas. Thus, the choughs’ “comfort” levels seem to be influenced by how beneficial it is to tolerate the presence of people—the benefit, in this case, being a free meal. 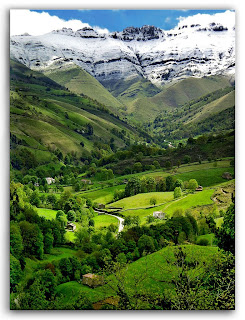 (The Cantabrian Mountains of SW Spain)


One of the most exciting and novel results of the study is that birds at tourist sites had lower levels of stress hormones and pathogens than birds living in non-tourist sites. Furthermore, in the red-billed chough, lower stress levels were correlated with shorter flushing distances. Several previous studies have shown that wild animals respond to the presence of humans with increased stress levels (which can, eventually, also lead to increases in pathogen load); on top of this, animals in highly-trafficked sites may be in poorer health or condition due to degradation of the habitat and disruption of their normal behaviors. The findings of the current study show a completely opposite trend and suggest that the birds are either learning (from their parents and neighbors) that it is safe to tolerate people, or potentially even evolving over time to become more tolerant. In order to distinguish between these possibilities, it will be important to conduct more behavioral studies (for instance, swapping chicks between tourist and non-tourist sites to see if they end up behaving more like their genetic parents or their social parents), and to collect DNA samples in order to look for genetic differences that may drive behavioral patterns.

It might sound like a good thing that the choughs have lower stress levels and pathogen loads, but one other thing to consider is that people might not always have good intentions. Choughs in disturbed areas may be more likely to be killed by vandals or poachers, for instance. Perhaps more importantly, these results highlight the strength of the influence that humans can have on wild animals, in general; it will be interesting to see what adaptive and evolutionary responses are observed in other species elsewhere.

Regardless, these results might make you think twice before going on an ecotourism vacation. At the very least, it might be a good idea to stick your food scraps where the animals can’t get to them.
---
Jiménez, G., Lemus, J.A., Meléndez, L., Blanco, G., Laiolo, P. Dampened behavioral and physiological responses mediate birds’ association with humans. 2011. Biological Conservation 144:1702-1711.

Thanks to the following websites for providing the photos used in this post:
http://trailsandtreasures.com/blog/category/architecture/page/3/
http://www.biolib.cz/en/taxonimage/id17135/
http://pixdaus.com/single.php?id=110374
Posted by Caitlin Kight at 04:38