Although urbanization can pose problems for many species of animals, some manage to cope with the habitat changes, higher levels of disturbance, and loud noise that are an inherent part of anthropogenic areas. Collaborators from Lund and Leiden Universities have teamed up to investigate what characteristics allow one of these urban-tolerant animals to thrive. Specifically, they focused on what types of vocal flexibility might make it easier for common chiffchaffs (Phylloscopus collybita) to maintain their ability to communicate in urban environments.

Chiffchaffs are leaf warblers named after their songs, which alternate between high ("chiff") and low ("chaff") syllables. 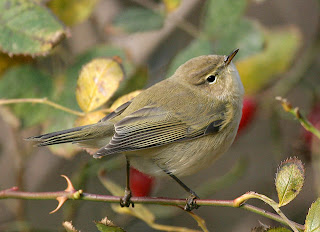 
The birds breed throughout much of Europe, but the researchers concentrated on a population in De Vlietlanden, a wetland area between Leiden and The Hague in the Netherlands. They located two parallel tracts of land--one running alongside a noisy road, and another bordered by a quiet river. Eleven singing males were located along each tract, allowing the researchers to compare song characteristics between similarly-positioned males in the quiet and loud territories. 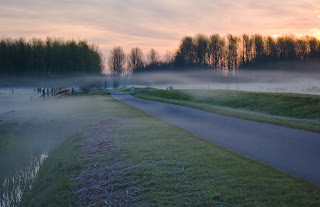 (Sunrise in De Vlietland)
Noise levels were approximately 10 dB higher along the road than they were along the river (57 dB compared to 46 dB), a fairly significant challenge for the roadway birds to overcome. Males in these noisy areas sang songs with higher minimum frequencies and also fewer syllables than their riverside counterparts. It is not clear whether these two song measures are associated (e.g., the males selectively omitted lower-pitched syllables, thus producing higher-pitched, fewer-syllabled songs) or whether these are two separate vocal manipulations in response to the noise.

In addition to collecting these observational data, the researchers also performed an experiment in which they exposed riverside birds to recordings of highway sounds in order to see whether the birds responded in "real time" to the increased ambient noise level by altering their songs. Indeed, shortly after the noise began, the birds began delivering songs that had a higher minimum frequency, and this vocal change made their songs comparable to those of the roadway males. Recordings collected the day after the experiment showed that the river birds had resumed their normal mode of singing in the absence of the added noise, indicating that this vocal flexibility is a short-term solution to the noise problem. It remains to be seen whether roadway males, if relocated to a quiet habitat, would adjust their songs in response to the quieter conditions.

Cumulatively, these vocal adjustments likely benefit the birds by releasing them from the masking effects of highway noise; similar behaviors have been observed in other animals, including humans. The researchers have indicated that they are interested in doing additional work to investigate the mechanisms behind these song variations--although it is possible to raise minimum frequency directly, it is also a common side effect of increasing amplitude. Since this variable was not measured in the current study, future research will be needed to explore whether chiffchaffs also responded to highway noise by singing more loudly.

Thanks to the following websites for providing the photographs used in this post: