More than half the people on Earth live in urban areas, and urban land is the most rapidly growing land cover type in the world. There are measurable differences between urban areas and neighboring land, including temperature, length of plant growing season, seasonality of food abundance, type and number of predator, and composition and structure of wildlife populations. As a result of these environmental differences, organisms that live in urban populations often have noticeably different physical characteristics. In birds, for instance, researchers have measured variations in plumage color, communication, stress levels, diet, blood biochemistry (e.g., cholesterol), size and shape, and migratory tendency. These can all have significant impacts on the health and success of individuals, which, in turn, can have broader-scale impacts--for instance, on the food web or on ecosystem function.

Generally, differences between urban and rural populations have been conducted over relatively small scales, incorporating just a small portion of a species' entire range--for instance, urban and rural birds in a single city. In order to investigate how widespread these urban-rural dichotomies are, collaborators from the University of Sheffield, the University of Cambridge, and the University of Exeter's Cornwall Campus, conducted a large-scale study across Europe. They sampled 651 common blackbirds (Turdus merula) during the 2006 and 2007 breeding seasons. The blackbirds came from 11 paired and urban rural breeding populations across nearly the whole of the blackbirds' range: Tunis, Tunisia; Valencia, Spain; Madrid, Spain; Berlin, Germany; Groningen, Holland; Prague, Czech Republic; Krakow, Poland; Sheffield, England; Szczecin, Poland; Riga, Latvia; and Tallinn, Estonia. They also measured birds at an additional rural site in Montpellier, France.

At each site, they measured wing length, length of the long leg bone (the tarsus), bill length, bill depth, and body mass. This allowed them to investigate whether there are consistent differences between urban and rural areas. Further, because they knew when blackbirds had first colonized each of the urban environments, they were also able to determine whether the degree of morphological difference (if any) was related to the length of time during which the birds had lived in urban environments. The researchers' third analysis investigated whether urban environments affected well-known, broad-scale geographic patterns in morphology--a tendency for higher-latitude animals to be bigger ("the neo-Bergmannian rule"), and a tendency for non-migratory individuals to have shorter and more pointed wings ("Seebohm's rule"). 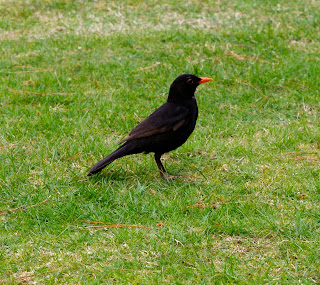 (Common blackbird, Turdus merula. This bird sports a habitat-related morphological variation that wasn't investigated in the current study: a deep orange bill, characteristic of most blackbirds found on the Isles of Scilly. This one was photographed on the main island, St. Mary's.)

When they made comparisons between urban and rural birds at each study site (e.g., in Madrid and just outside it, in Sheffield and just outside it, etc.), the researchers did find consistent physical differences. In general, urban birds tended to have longer wings and, in particular, stubbier bills. At some sites, they also had longer leg bones and higher body mass, but at other sites it was the rural birds who showed these characteristics. Thus, even though habitat type was associated with specific physical traits, patterns weren't consistent over the blackbirds' entire range, so there was no clear body type for "urban" and "rural" birds. Furthermore, any existing differences were not related to time since urbanization, and there were no differences in the physical gradients (as predicted by the neo-Bergmannian and Seebohm's rules) in urban and rural environments.

The researchers found these patterns rather surprising, given that many previous studies have shown urban-rural variation, and since animal physiology and morphology responds to even more subtle differences than those found between the pairs of habitats examined here. Urbanization was found to have a clear effect--especially on bill length, suggesting that birds in urban habitats have different feeding habits than their rural counterparts--but not as large or widespread an effect as anticipated. However, there are likely very complicated interactions responsible for morphology in urban environments--for instance, even though you might expect birds to be smaller because of the warmer city temperatures, perhaps it behooves them to be larger, so that housecats cannot prey on them as easily. These competing selective pressures would likely differ from city to city, thus preventing the establishment of any clear patterns. Not surprisingly, the researchers state that future work, including genetic analyses, will be needed to more fully understand the complex interplay of factors responsible for the differences (and lack thereof) between city birds and their country cousins.