Effects of urbanization on plumage coloration in northern cardinals


Many species of birds use plumage color to signal quality and attractiveness. In the case of reddish coloration, these signals are considered "honest" because the birds derive the color from carotenoids (reddish pigments) in their diet; only birds that forage efficiently will ingest enough carotenoids to allow them to generate brilliant yellows, oranges, and reds. So what happens in anthropogenic environments, where habitat changes often lead to alterations in the types and amounts of food available? Will birds still be able to find enough carotenoids? Will their red plumage displays still be a sign of quality, or will there be such an abundance of food (e.g., from feeders and exotic plants) that all birds can be equally colorful? 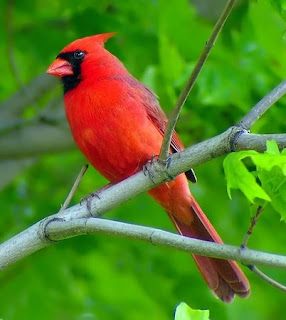 These questions were recently addressed in a study by collaborators from the Ohio State University and the Massachusetts College of the Liberal Arts. They examined plumage quality of breeding northern cardinals (Cardinalis cardinalis) along an urban-rural gradient in the Scioto River watershed area near Columbus, Ohio, USA. After capturing the cardinals, researchers measured the birds' body sizes and weights, then collected feather samples. The samples were glued down on a piece of paper in a natural overlapping pattern (mimicking how they would appear on the birds' bodies), photographed in a light studio, then imported to Adobe Photoshop, which was used to measure the three main characteristics of color: hue (exact tint or shade), saturation (purity), and brightness (radiance).

Using these measurements, the scientists attempted to answer two main questions: Does coloration vary along an urban-to-rural gradient? Does plumage coloration reflect differences in condition? Because male and female cardinals do not have the same plumage coloration, they were considered separately in all analyses. Further, males and females also differ in metrics of condition; for males, high condition is indicated by having more weight (mass) given a certain body frame size, but for females, better condition is indicated simply by overall weight, where bigger is better. 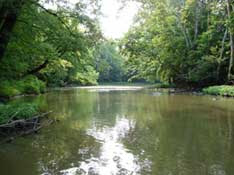 
Across all study sites, males in higher condition produced brighter plumage. However, plumage brightness was negatively affected by urbanization: Males in habitats nearest urban areas had the least bright plumage. Interestingly, a complex interaction was found between condition and urbanization, indicating that, in rural landscapes, condition was a better predictor of brightness. This suggests that males in rural areas are having to work harder to find carotenoids, and only those males in the best condition are able to acquire enough to achieve very bright plumage. That this is not an issue in urban environments indicates that city cardinals have plenty of available food--perhaps from exotic plants such as the Amur honeysuckle (Lonicera mackii), which contains a carotenoid pigment called rhodoxanthin and is known to cause a shift from yellow to orange plumage in another bird species, cedar waxwings (Bombycilla cedrorum). Among females, coloration was not related to either mass or urbanization. 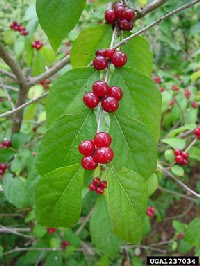 (Fruiting Amur honeysuckle, Lonicera maackii. You may be more familiar with the appearance of the plant when it's in flower; it has trumpet-shaped white flowers that exude a lovely aroma and a tasty sugary syrup.)


Since all males in urban environments seem to obtain carotenoids fairly easily, red plumage coloration may no longer be an accurate, and therefore useful, indicator of quality in these habitats. This raises the question of how females will be able to judge which males they should select as mates. The authors suggest that other physical attributes, such as the birds' black face mask, may be important. Future studies will be needed to investigate mate selection in cardinals along the urban-rural gradient in order to investigate whether it differs depending on habitat. The authors also state that it is necessary to develop a more mechanistic understanding of the plumage differences caused by urbanization. For instance, it will be important to document males' diets, as well as investigate the biochemical process of carotenoid processing and feather development in urban and rural birds.

Thanks to the following websites for supplying the photos used in this post: