Are lions responsible for our fear of the dark?


The great apes--gorillas, chimpanzees, humans, and orangutans--have always lived near large carnivores that hunt predominantly at night. One such carnivore is the lion, which was once the most widely distributed mammal in the world. Lions are so important to human history that they are featured in cave paintings from as long as 36,000 years ago. But it turns out that there is another indelible mark they have made on human history: Research out this week suggests that humans' innate fear of the dark, as well as our unease with full moons, may have been driven by the cats' hunting practices. 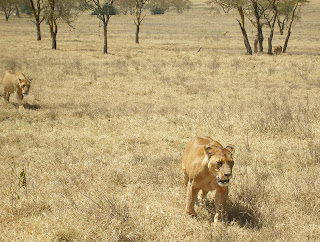 Scientists from the University of Minnesota and the Tanzanian Wildlife Research Institute took advantage of several excellent long-term datasets in order to investigate which parts of the lunar cycle are associated with lion hunting success and human attacks. They examined one subset of African lions--those living in the Serengeti and Ngorongoro Crater in southern Tanzania. These animals have been studied in detail for over thirty years; one measurement that has consistently been taken during this time is "average belly size," which indicates how well fed the lions are. In addition to astronomical data on lunar cycles, the researchers also had access to meteorological records, which allowed them to look for effects of season (since there are more clouds during the rainy season and, thus, more darkness). They obtained information from the Tanzanian government on all lion attacks on humans between 1988 and 2009, then followed up with the victims or the victims' families in order to get further details about each event. Cumulatively, all this information allowed the researchers to find out when lions fed the most, when those feeds were associated with successful hunts, rather than scavenging, what time of month and day humans were most frequently attacked by lions, and whether any of these parameters varied during different seasons of the year. 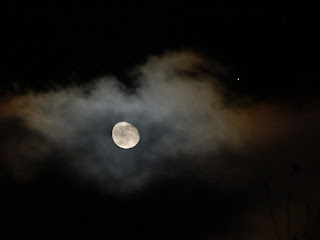 Overall, more than 1000 Tanzanians were attacked during the 21-year study period. More than two-thirds of these attacks were fatal, and victims were not only killed but also eaten by the lions. Unsurprisingly, given that lions are predominantly nocturnal hunters, the majority of victims were attacked after dark. The researchers excluded information from retaliatory lion hunts, which narrowed their dataset down to 474 victims from 450 separate attacks.

Among lions in the Serengeti and the Ngorongoro Crater, belly size was larger on days after moonless nights, indicating that food intake was higher when nights were darker. Further, belly size was related to the amount of ambient light, regardless of whether it occurred during the waxing or waning of the moon. As found in previous studies in South Africa and Uganda, lion hunting success was highest on dark nights--in other words, the full bellies noted after moonless nights were not a result of scavenging, but of successful capture of fresh prey. During the period around the full moon, when the lions had reduced hunting success at night, they spent more time killing and scavenging during the daylight hours in order to supplement their diet. 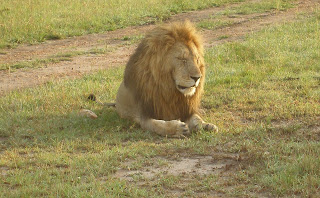 (Slumbering male lion. They look so innocent with their eyes--and mouths--shut.)

Based on these data, the researchers conclude that human feelings towards both darkness and full moons are adaptive responses geared toward increasing survival in habitats with large, nocturnal carnivores. Our surviving ancestors were those that learned to fear the dark and stay inside their shelters at night, away from predators; this fear became so ingrained that it is in our genes even now, when the majority of us live in environments where these predators no longer exist. Our feelings toward the full moon have similar origins. Even though illumination from the full moon afforded some measure of protection, by enabling our progenitors to see better and by making it more difficult for predators to sneak up on them, it was also a portent of the time when lions would be hungriest and most active (due to their lack of hunting success during the brightest evenings of the month). Thus, human cultures around the world developed stories and superstitions about this dangerous time--arguably the most famous of which is the idea that humans might morph into toothy, clawed beasts (such as werewolves) during this phase of the moon.

Next time you see Teen Wolf on TV or feel the need to plug in a night light when it's a bit too dark, you'll know who to blame.

http://universe-beauty.com/Space-photos/Other/Moon-and-Mars-Tonight-2267p.html
Posted by Caitlin Kight at 17:36