Birds' tolerance to urbanization is influenced by their biogeographic range

Of all the places impacted by urbanization, tropical habitats rank near the top of the list. Because these areas are often "hot spots" for biodiversity, containing many different species in a single place, even small amounts of urbanization threaten to wipe out whole species. Unfortunately, because of the diversity and ecological complexity of tropical habitats, there is still much to be learned about the species that live in these areas and, especially, about their habits. Entirely new species are discovered each year, and only a small portion of all species have been studied in detail. Yet, without more species-specific information, it is difficult to develop good management and conservation plans, since it is hard to predict exactly how and why different species will be impacted by human developments.

This is the conundrum addressed by recent work from a scientist at the Universidad de las Américas Puebla in Puebla, Mexico. He investigated diversity of songbird assemblages throughout Mexico in order to determine if they are less diverse than in rural areas--as has been found in other, non-tropical, countries. He then examined whether particular types of bird species seem to be particularly sensitive to urbanization, or, conversely, particularly common in urban habitats. A bird's "type" was determined by its biogeographical range--in other words, what sort of habitat the bird prefers, and how much space that habitat covers. Thus, classifications (there were a total of 7) indicated whether the birds were from, say, the Nearctic area (basically, all of North America above the Yucatán Peninsula), or whether they occurred only in Mexico. The study compared urban and non-urban bird assemblages at both local (within Puebla) and national (across Mexico) levels, in an attempt to investigate whether diversity patterns are influenced by the spatial scale at which they are measured. 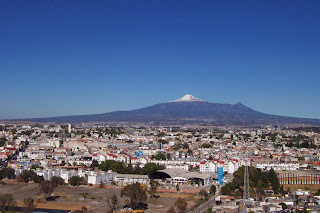 (The skyline of Puebla, Mexico)

In non-urban sites, the most common birds were those that are found only, or mostly, in Mexico, as well as Neotropical birds (those from the Neotropical region, which covers all of the western hemisphere below the Nearctic zone). In other words, the birds that were most "distinctive" to the region were most threatened by increased human development. On the other hand, urban sites were dominated by non-native species, birds with a wide distribution (found across both the Neotropical and Nearctic zones, and, in some cases, the Palearctic zone (which comprises Europe, North Africa, Russia, and much of Asia and the Middle East), Nearctic birds, and semiendemics (which only live in Mexico during one season).

At both regional and national levels, songbird assemblages in urban areas were less diverse than expected by chance, with Neotropical species and endemics (those found only in Mexico) being particularly underrepresented. Thus, urbanization leads not only to similarity between cities within a single country, but also, to some extent, between countries, since regional "specialties" disappear and are replaced by species that can be found in many places (think of pigeons, Columba livia, and house sparrows, Passer domesticus). 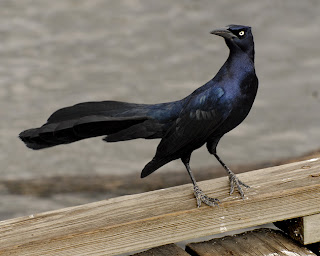 
Interestingly, the only species found at all urban study sites in the nationwide survey was the great-tailed grackle (Quiscalus mexicanus). This is not, as you might expect, a non-native species, or even a species classified as having a wide distribution. In fact, it is a Neotropical species--one of the few to do well in the face of urbanization. Along with house finches (Carpodacus mexicanus), lesser goldfinches (Carduelis psaltria), and house sparrows, the great-tailed grackle has previously been identified as an "urban exploiter." This probably doesn't surprise anyone who has seen grackles, finches, and sparrows happily put up with house cats, lawnmowers, passing cars, playing children, and any number of other disturbances, in order to visit bird feeders or peck at food scraps on the sidewalk.

The author conjectures that one of the reasons that native tropical species don't respond well to urbanization is their "slow pace of life"--they lay fewer eggs per breeding attempt, their nestlings grow slower, their juveniles are dependent on their parents for longer, and they have longer life spans. All of these characteristics make them less flexible to changes in their immediate environment, and if there is anything urban tolerance requires, it is adaptability. Although much more species-specific research will need to be conducted to determine the exact reason for each species' sensitivity to urban development, the author suggests that, for now, biogeographical origin can be used to predict which species will likely be affected by anthropogenic disturbance. This should help conservationists develop management plans to preemptively help these species before they become threatened, endangered, or extinct.

Thanks to the following websites for the images used in this post: