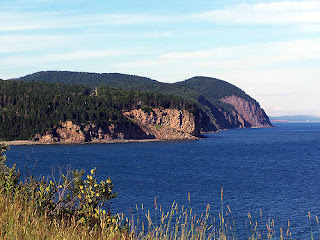 (The Bay of Fundy, Canada)


Anthropogenic noise has been studied not only in terrestrial habitats, but also in aquatic environments, where it can disrupt communication of a number of organisms, including fish, crustaceans, dolphins, and whales. A recent study by collaborators at Penn State University, Woods Hole Oceanographic Institution, and Duke University has demonstrated, for the first time, that individual North Atlantic right whales (Eubalaena glacialis) adjust the amplitude of their calls in response to ambient noise levels.

These endangered whales (Eubalaena glacialis) live in the coastal waters of the eastern US and communicate using low-frequency (50-400 Hz) sounds that can be masked by noise from the high levels of commercial, naval, and recreational ship traffic found throughout their habitats. Impaired vocal communication can impact mating and feeding behaviors, increase stress levels, and possibly decrease reproductive success, all of which would be particularly problematic in a species whose population numbers are already dangerously low. 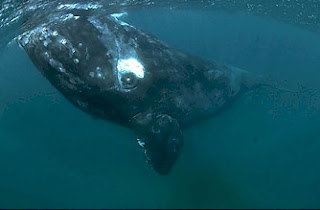 
Researchers cornered whales after they swam into the Bay of Fundy, where they ultimately fitted 7 females and 7 males with suction cup tags containing acoustic recording devices. These yielded a total of 107 calls that could be analyzed. The data indicated that whales spent time in waters with ambient noise levels ranging from 92-143 dB (don't be surprised if that seems excessive--aquatic noise levels are generally higher than terrestrial ones because they are calculated in a way that takes into account differences in sound propagation in water versus air). The habitats were dominated by noise below 400 Hz--in other words, the very same frequency bandwidth used by calling whales. 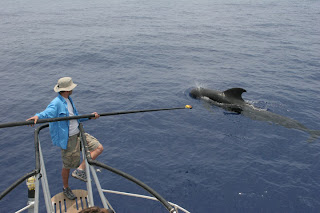 For all types of calls, the whales increased the amplitudes of their vocalizations as ambient noise levels increased. Thus, not only were they aware of differences in environmental conditions, but they also actively adjusted in order to compensate. This pattern was observed in both sexes and across all age groups. Interestingly, and contrary to some previous research, the whales did not change the frequency characteristics of their vocalizations. The authors suggest that this is because whales use amplitude adjustments as a short-term, immediate response to noise, but, over time, gradually learn to manipulate frequency characteristics, as well.

For now, it appears that these vocal manipulations are sufficient to maintain the whales' signal-to-noise ratios in human-disturbed environments. However, it is unknown whether the whales use even louder habitats where, perhaps, they are no longer able to combat the noise. Calling at such a high amplitude may be energetically demanding, or may make the whales more obvious when they would rather remain hidden; the researchers hope to examine these fitness implications in future research.


http://www.cascadiaresearch.org/hawaii/shortfinnedpilotwhale.htm
Posted by Caitlin Kight at 03:03