An apparent example of convergent evolution has just been reported for Anopheles gambiae, an African mosquito species that can spread the human malaria vector, and Evarcha culicivora, an East African jumping spider that feeds (indirectly) on vertebrate blood.

After noticing the abundance of E. culicivora in and around human dwellings, collaborators from the University of Canterbury (Christchurch, New Zealand) and the International Centre of Insect Physiology and Ecology (Mbita Point, Kenya) decided to test whether the spiders used human scent to locate, and move towards, these areas. The goal of the spiders would not be to feed directly on humans, but instead to capture recently-gorged mosquitoes and consume human blood second-hand. Previous work has shown that the spiders have excellent eyesight, but also that they are capable of using olfaction alone to identify prey. Thus, it seemed possible that they might use their sense of smell to locate the food of their food, positioning themselves not only near mosquitoes, but specifically near ones that were full of blood. 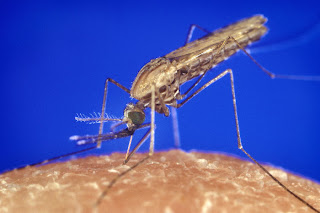 
To test this, the researchers built a set of interconnected stimulus and test chambers. The stimulus chamber was connected by a set of hoses to 16 separate holding chambers, which were then connected to exit chambers. The entire system was ventilated, such that scent from the stimulus was blown into the holding chambers, in each of which sat a spider. Once the ventilation had begun, the researchers measured how long it took each spider to move from its holding chambers into its exit chamber. Spiders that found the ventilated stimulus scent interesting/attractive would be more likely to linger in the holding chamber for a longer period of time. Each spider was subjected to two trials: one in which the stimulus was a pair of white cotton socks that had been worn continuously for 12 hours preceding the trial, and one in which the stimulus was a pair of clean, unworn socks. The researchers studied 109 spiders altogether--27 adult males, 21 adult females, 32 small juveniles, and 29 large juveniles. This allowed them to investigate potential differences related to sex and age. 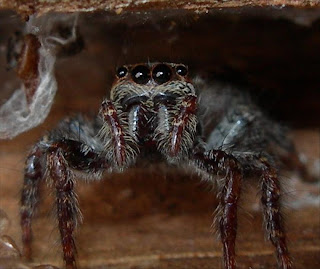 
The results were pretty dramatic. All types of test animals spent significantly more time in the holding chamber when worn socks were used as a stimulus than when clean, unworn socks were used. Further, there were no behavioral differences between males and females, small and large juveniles, or adults and juveniles. Given the universality of the response to human scent, and the fact that the test spiders were captive-bred and had not been exposed to similar scents in the past, these results suggest that the spiders do not learn over time to associate human odors with a meal. Rather, this appears to be an innate response--one that helps attract them towards areas where they will find food.

If there is any lesson to be learned here, it is that you should try to smell as clean as possible if you are visiting Africa and don't want to run in to too many jumping spiders. Unfortunately, though, Anopheles mosquitoes locate their victims using not only human scent compounds, but also carbon dioxide emissions, heat, and moisture. So no matter how clean you plan to be, if you want to avoid mosquitoes, you'll need to pack some bug spray--and quinine pills.