Birds know where they are not wanted

Human attitudes toward wild animals are influenced by a number of factors, including demographics such as gender and age, socioeconomic status, level of education, and cultural experience. These attitudes, in turn, affect the interactions that people have with the animals around them; where some individuals might feel inclined to commune with wildlife, others might be more interested in chasing it off. In time, many animals may learn to discriminate between friend and foe, haven and wildlife war zone, and may change their behaviors accordingly. Understanding more about this process, and the links between these three factors, can be helpful in developing outreach programs, management policies, and conservation plans. 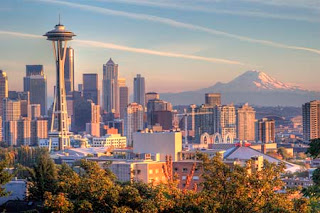 
Two researchers--from the University of Washington and Germany's Humboldt University--recently conducted a study on this topic, focusing on attitudes toward birds along a rural-urban gradient in Berlin, Germany, and Seattle, Washington. They selected two study sites at each of four different urbanization levels (urban, dense suburban, light suburban, rural) in each city, for a grand total of 16 study sites. At each of these, they conducted house-to-house surveys in order to collect information on residents' feelings about wild birds--demonstrated by whether they feed the animals or whether they actively discourage them from coming too near--and on several other factors that can influence these attitudes (gender, age, whether or not they have children, socioeconomic status, and education level).


In each area, the scientists also quantified avian responses to humans. To do this, the researchers measured flight initiation distance (FID), or the distance at which birds took off when approached by pedestrians. Rather than focusing on all local species, they examined 3 corresponding species in each city: hooded crows (Corvus cornix), house sparrows (Passer domesticus), and starlings (Sturnus vulgaris) in Berlin, and American crows (Corvus brachyrhynchos), American robins (Turdus migratorius), and starlings in Seattle. Whereas the sparrows and robins are charismatic species that are generally regarded with goodwill, the two crows are examples of species that are often persecuted; starlings are interesting because they are native to Berlin, but invasive to the US, and may therefore be associated with very different attitudes in the two cities.


A number of factors determined whether people were more likely to feed birds or chase them away. Germans--especially those in dense suburban areas--fed birds more than Americans; however, across both cities, urban residents were less likely to feed birds than suburban and rural inhabitants. Older respondents, and those who owned their homes, were more likely to feed birds, as were people with children (regardless of their domestic status). Americans and older residents were more likely to discourage avian wildlife, but the least bird-friendly people were those in rural Seattle; Berlin residents were equally likely to discourage birds, at minimal levels, across the entire urban gradient. Although inhabitants of both cities used many of the same tactics to discourage birds--physical barriers, acoustic deterrents, and decoys, for instance--only Americans attempted to scare off and injure birds by shooting at them. As the researchers predicted, the most negative behavior was directed towards crows (60%), then starlings (20%), then all other species combined (20%). 
The birds showed signs of understanding where they were not wanted. In general, urban birds tolerated much closer approaches than rural birds. Bird-friendly behaviors were not significantly correlated with FID, but bird-discouraging behaviors were: While Berlin birds had similar FIDs regardless of local human activities, Seattle crows and starlings--the two most persecuted species--had significantly shorter FIDs where anti-bird attitudes were highest. The authors are not sure whether these birds are wary as a result of past experience over the lifetime of particular individuals, or whether unfriendly anthropogenic habitats have selected for greater cautiousness across the entire species; this may be an interesting area of future research.


It is sad to think that negative behaviors have a much greater impact than positive ones, but the authors have some theories as to why this might be so. Perhaps most importantly, bird feeding is much more indirect than bird-discouraging, and so animals may never learn to explicitly associate food supplements with humans, per se, but, instead, with feeders and other anthropogenic structures; on the other hand, they are likely to remember that a tall, two-legged animal is likely to throw rocks or make frightening noises. It is also possible that any effects of goodwill are drowned out by the more obvious impacts of exposure--in other words, birds are more likely to relax as a result of habituation, caused by many repeat encounters, than because of any overt "peace offerings" made by their human neighbors.

Although the current study only focuses on five bird species in two cities, the general patterns reported here are similar to those found elsewhere in other species. Cumulatively, these results indicate that human attitudes translate into predictable suites of human behaviors that, in turn, have predictable impacts on local wildlife. This suggests that animal preservation initiatives would be greatly aided not only by improving the species' habitats and breeding success, but also by increasing human goodwill towards. Interestingly, the current results also support previous findings that Americans have more "negativistic" and "utilitarian" views towards wild animals, whereas residents are more "moralistic" and "naturalistic" in Germany and elsewhere in Europe. Thus, it will be important to keep cultural differences in mind when developing plans to alter human-wildlife relationships.