Man's trash is a lizard's treasure?

Veterinarians admonish us not to feed our pets "people food" because it isn't good for them. A logical corollary would then seem to be that wildlife should also be kept away from human fare and the scraps thereof. Indeed, several studies have shown that urban animals nibbling on human trash wind up with some of the same health problems that plague us as a result of consuming greasy, high-carb, packaged foods. Given these patterns, it comes as a bit of a surprise to learn that Australian lace monitors (Varanus varius) may actually benefit from anthropogenic "subsidies" in the form of free meals at the local garbage dump. 
These animals, also known as goannas, were the subject of a study by researchers at the University of Melbourne, Zoos Victoria, and the Australian Wildlife Health Centre. The goannas were examined in situ at four different sites: two undisturbed forests in which resident monitors consumed their natural diets, and two small garbage dumps associated with nearby rural towns. Because the dumps were located at some distance from the towns, and in the middle of small patches of forest, they closely mimicked the natural areas; the only major difference was that goannas near the dumps were able to forage on edible refuse dropped off daily by human neighbors.

In addition to performing point counts to estimate lizard density at each site, the researchers caught as many animals as possible in order to mark and measure them, and to collect a blood sample that could be subjected to a suite of laboratory analyses. Specifically, the scientists could perform counts of both red and white blood cells, assay for liver- and heart-related metabolic syndromes, measure metabolic activity and corticosterone levels, look for the hematozoan parasite Haemogregarina varanicola, and extract genetic data to sex each lizard. Cumulatively, these tests enabled the researchers to compare size, condition, physical health, and stress levels of "natural" and food-supplemented monitors.


The first obvious difference between the two types of experimental site was lizard density. Not only were there 35 times as many monitors at subsidized sites, but the same individuals were repeatedly encountered over multiple visits; on the other hand, there were no resightings in natural areas. Unfortunately, it is not yet clear whether garbage dump lizard densities are high because animals from neighboring forest patches migrate there in droves, or because there were a few original colonizers who have successfully survived, reproduced, and created a large local population.
Results from the morphological and physiological measurements indicated that a life of luxury can be found in anthropogenic sites. Monitors near garbage dumps were bigger (in terms of both length and weight) and in better body condition than their counterparts in the control sites; they also had higher red blood cell counts and showed no signs of metabolic syndromes or undue stress (as indicated by aspartate aminotransferase/creatinine kinase and corticosterone levels, respectively).

(Lace monitor basking on top of a backyard BBQ)


Lower levels of plasma glucose, taken into consideration with the high body condition and low corticosterone levels, indicated that supplemented monitors were having to expend less energy to obtain their meals--a finding supported by the observation that lizards at subsidized sites could often be found basking in the sun rather than foraging for a meal. That sounds awfully similar to the sorts of patterns observed in modern humans; thus, it isn't too surprising to note that, like humans who eat highly processed foods, supplemented monitors have higher levels of phosphorous and sodium in their plasma. On the up side, though, they also have fewer blood parasites.

As with the density data, these correlations leave a major question about cause-and-effect: Are supplemented monitors morphologically and physiologically successful because of the abundant human food, or are these types of individuals simply attracted to, and able to live in, anthropogenic areas? Future research will be needed to determine the answer. Either way, these results seem to indicate that garbage dumps, and human-supplemented habitats in general, can be a paradise for wild animals. 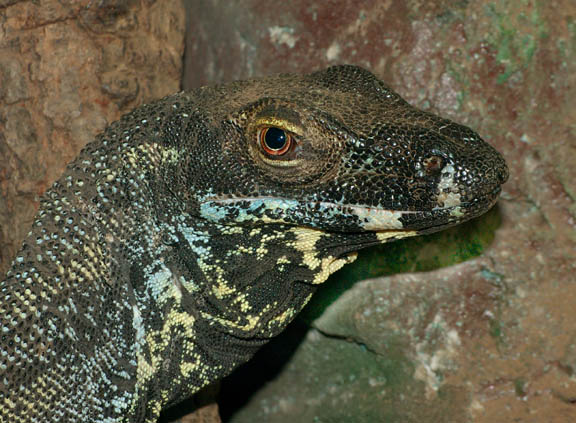 (Head shot of a goanna)


However, the study did reveal one additional pattern that suggests there may be more to these habitats than meets the eye. Genetic data indicated that subsidized areas had sex ratios that were nearly 3 times as biased toward males; specifically, there were an average 5.3 males for each female. Unsurprisingly, this sort of bias increases competition for mates and decreases individual breeding success--with a few super-males often emerging to dominate. Not only can this reduce genetic diversity in the population, but it can also lead to higher rates of cannibalism if competitive males eat juveniles before they can grow up to be potential rivals. Cumulatively, these patterns generally render male-biased populations less successful, which means that long-term monitoring will be required to investigate whether human food subsidies are really as beneficial to goannas as they might initially seem.

Thanks to the following websites for providing the images used in this post:
http://www.ozanimals.com/Reptile/Lace-Monitor-Goanna/Varanus/varius.html
http://forums.kingsnake.com/forum.php?catid=55
http://www.artistsblog.com.au/2008/09/17/bbq-bouncer/
http://www.lplmc.com.au/20111114.html
Posted by Caitlin Kight at 02:44