It's easy to criticize microbes for all of the inconveniences they cause in our lives, but we also have the little guys to thank for some of our most beloved food items--beer, wine, bread, pickled veggies, and, of course, cheese.


Surprisingly, the last of these was recently the subject of one of Current Biology's "Quick guides," thanks to the fact that some scientists think cheeses may offer a useful system for cultivating and studying microbial communities in the lab. In addition to offering a quick snack to any lab technicians who suddenly find themselves hungry (just kidding!), cheeses are beneficial because they have a long and detailed history; cheesemakers have generations' worth of notes on what ingredients and techniques can be used to cultivate specific collections of microbes to generate particular characteristics. This means that researchers could easily and repeatably grow focal communities in the lab--something that would allow them to isolate individual species and investigate their contributions to the activity of the community as a whole. Once they'd studied the microbes under normal circumstances, they could then introduce "perturbations"--such as invasive species or environmental stressors--to see how they affect community health and function. All of this information could be useful for figuring out how to encourage the growth and maintenance of the beneficial microbial communities that live in and on us, while potentially discouraging invasion by those we'd be better off without.

While this was the take-home message of the cheese microbe primer, the bulk of the paper was actually devoted to explaining the role of microbes in creating the dairy product that so many of us love and snack on. According to the authors, cheese--otherwise known as fermented milk--probably dates back to the Neolithic, and was originally developed as a way of preserving milk. Our friends the microbes are important not only for catalyzing the curdling process, but also developing flavors, textures, and aromas during the aging process. 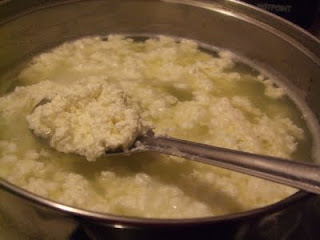 
"Curdling" refers to the creation of solid clumps of casein proteins and milk fat that float in liquid whey. This is facilitated by two processes: acidification and proteolysis. Microbes ferment lactose and produce lactic acid; this denatures the proteins and allows them to bind to each other. Coagulation is enhanced by the addition of the enzyme chymosin (found in rennet), which removes the negatively charged bit of casein and better allows the proteins to aggregate.

After curds are separated from the whey, they may be heated, salted, pressed, and formed into wheels; the exact techniques used at this point depend on which type of cheese is being produced. Although it is possible to eat these curds, many are aged--left in a cool, damp place where microbial communities can thrive and inject some personality into the cheese. Microbes can grow both inside and on the outer edge (or "rind") of the wheels, and while both groups are important, it is the "multispecies biofilm" of the rind that the authors feel will be particularly interesting in a research setting.

Variations in flavor, smell, and texture of different cheeses are determined by the types of microbe present, as well as the metabolic activity of each organism. Cheesemakers can impact these factors by varying whether they use raw or pasteurized milk, as well as influencing the pH, salt, moisture, and temperature during the initial and final stages of cheesemaking. Specific microbes (both bacteria and fungi) may be deliberately added in order to achieve certain cheese qualities, and cheesemakers may also bathe their rinds in solutions that provide optimum growing conditions for particular microbial species.

(Curds are prepared for the aging process. Image courtesy of Penn Mac.)


The authors also discuss which microbes and microbial activities are responsible for the unique properties of certain cheeses. For instance, they explain that the ooziness of Brie and Camembert results from the addition of Penicillium camemberti, which forms a dense mat of hyphae on the cheeses' surfaces; the hyphae secrete proteases that break down casein in the curds, thus liquefying the cheese. P. roqueforti, on the other hand, is the species that we have to thank for blue cheese. A microaerophile, this species likes to grow in crevices (or "veins") that it carves out of the cheese after wheels are formed. The color that gives the cheese its name comes from a pigment that is produced by the fungus during sporulation. Finally, the iconic holes of Swiss cheese can be attributed to the growth of Propionibacterium freundenreichii, which produces propionic acid and carbon dioxide while fermenting lactic acid. Because the bacteria live on the inside of the wheel, the gas is trapped inside the curds--forming pockets that appear as holes when the cheese is sliced.

Clearly, cheesemakers and scientists have already done a fairly good job documenting the diversity and activity of microbes associated with cheese. Still, there is quite a bit of work that remains to be done if we are to fully understand the tiny differences that separate each type of cheese, and the delicate preparations necessary to ensure these variations. For instance, according to the authors, the microbial components of cheese "are only partially dictated by the pure cultures inoculated by cheesemakers." Other species come from the environment, so their presence (or absence) is associated with an element of chance--though cheesemakers have developed methods of encouraging colonization by some species and communities. Working together, researchers and cheesemakers may come to understand this part of the cheese-making process in better detail, thus reducing the uncertainty associated with this step of preparation, and perhaps even leading to the development of new flavors and textures.