The many benefits of bird banding

Bird banding--or ringing, as it is called in Europe--dates back at least to the 16th century, and was first performed in the US by none other than John James Audubon. It is a technique that has given us amazing insights into the movements of migratory birds and the demographics of bird populations. However, according to biologist Çağan Şekercioğlu, this is only a fraction of what bird banding efforts can achieve. He sees long-term banding efforts as a means of providing science education, job training, and ecotourism opportunities to locals, as well as initiating grassroots conservation projects.

Şekercioğlu wrote about the many benefits of bird banding efforts in Biological Conservation, which recently released a special issue devoted to honoring the memory of conservation ecologist Navjot Sodhi. Like Şekercioğlu, Sodhi was heavily involved in bird banding efforts, and both biologists believed that close ties between researchers and the communities in which they worked could be helpful to all involved. For example, scientists might benefit from the expertise of local guides, who could point out where particular habitats or species could be found. On the other hand, local schoolchildren might have the opportunity to see wild birds up close and personal for the first time, while more mature residents could be trained as bird banders and develop a marketable new skillset. According to Şekercioğlu, such mutually beneficial interactions have the potential to spark grassroots conservation efforts that facilitate "holistic biodiversity-monitoring" by integrating "community involvement, capacity-building, outreach, environmental education, and local job creation."

Both Şekercioğlu and Sodhi saw the creation of such programs as vital, since "top-down, large-scale quick fixes" often fail to work--partly because locals (quite rightly) resent the intrusion by outsiders, and oppose conservation plans because they do not understand their value and/or do not benefit from them. Bird-banding efforts, and the creation of long-term biological research stations that facilitate them, have the potential to avoid this problem. As evidence, Şekercioğlu offers case studies of two banding stations that he has helped establish over the course of his career.

The first is the Las Cruces Biological Station in Costa Rica, where the author initiated a banding program in 1999. Unlike many tropical countries, Costa Rica is fairly wealthy, and its residents are well-educated. Once local teachers heard about Şekercioğlu's banding efforts, they approached him in the hopes of exposing their students to science in action; thus was born the author's interest in forging a close bond between environmental work and public outreach. He describes how some children reported giving up their slingshots after feeling the heartbeat of a live bird in their hands; it is easy to see how that sort of inadvertent success would inspire Şekercioğlu to attempt further conservation education efforts. 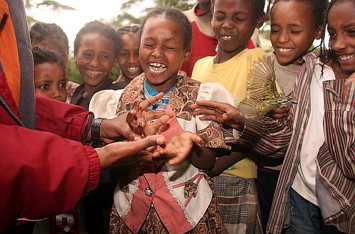 The second case study is the Ethiopia Bird Education Project, or EBEP. Unlike Costa Rica, Ethiopia is a relatively poor country with undereducated inhabitants (literacy rates are 42% for men and only 18% for women). Many Ethiopians have never had the opportunity to learn about the natural history of their country, or find out how valuable it is. As part of the EBEP effort, banding sites were deliberately established near schools, and partnerships were formed with both educators and local tourism bureaus. During banding events, ornithologists hand over the captured birds to educators, who then show the animals to students and teach the children how to handle and release the birds back into the wild. While students are learning about ornithology, migration, and conservation, the researchers are collecting information on thousands of birds in a variety of habitats--a vital step towards censusing Ethiopia's avian diversity and developing appropriate management plans. As a result of these efforts, many locals have eventually become staff members at the banding station, and one became the first Ethiopian ever to get a banding license.

Şekercioğlu's essay focuses mainly on banding stations in developing countries because these are the areas where formal environmental education is most lacking, and where high levels of biodiversity make conservation efforts most vital. Scientifically, these regions are also interesting because they are typically understudied; ornithologists tend to know more about temperate than tropical species, and we know surprisingly little about what happens to migratory temperate species once they reach their tropical wintering grounds. Unfortunately, according to the author, funding bodies tend to offer only limited funding for research, outreach, and "capacity-building" in tropical regions; in his words, the financial support offered is "disproportionate" to the number of birds (and people) that the research efforts would impact. On top of this, government agencies tend to make it difficult to obtain and renew permits; Şekercioğlu laments that "it is easier and faster to get a permit to hunt birds than to study them." He therefore urges funding bodies to reconsider their stance on grant distribution--particularly in light of the fact that a 3-month field season is often much more affordable in tropical areas than it is in temperate climates.

(A map of estimated avian biodiversity shows why tropical research and conservation efforts are so important. Image courtesy of Gavin Thomas.)

Overall, the author hopes that his essay calls attention to his and Navjot Sodhi's belief that "it is imperative for bird banders, conservationists, ornithologists, and other concerned citizens to constantly communicate to the public and decision-makers the conservation value of bird banding and its negligible impacts to birds." The success of his own banding programs in two extremely different tropical habitats suggests that Hopefully, an increased awareness of the value of bird banding as a tool for helping both birds and humans will help provide a better future for everyone involved.