Predation can act as a very strong selective force on animals, since an inappropriate or ineffective defense mechanism could easily lead to death. This means that you might expect to see rapid behavioral changes in animals that become exposed to a new predator by moving from one habitat to another. In birds, for example, country-dwelling individuals need to be on the lookout for sparrowhawks and other avian hunters, while city-dwelling individuals tend to have more to fear from cats.

Although these broad differences in the "predator landscape" have been recognized for a while, nobody really knew what effect they were having on avian behavior. Theoretically, urban birds should respond to a predation event--or a simulated predation event, such as capture by a human--differently than their rural relatives. Further, the presence of these behavioral variations should be related to the amount of time that species have been living in urban areas, as well as with the density of predators found in those habitats. 
These were the hypotheses of two European researchers who analyzed behaviors in over 1100 individual birds of 15 different species in Denmark and Spain. The birds had been captured in mist-nets as part of a banding study, and the researchers took advantage of this simulated predation event by observing and cataloging several antipredation behaviors: wriggling, producing alarm and fear vocalizations, biting, losing feathers (thus making themselves harder to hold on to), and demonstrating "tonic immobility," the avian equivalent of becoming a deer in the headlights in response to fear and stress. The researchers also performed raptor censuses in order to determine whether rural birds really were exposed to more aerial predators. Susceptibility to predation by cats and sparrowhawks was calculated using a formula that accounts for the density of other potential prey items (which is generally higher in urban areas). Finally, the researchers chatted with bird watchers and looked through ornithological records in order to see when each focal species first began appearing in urban areas; this allowed them to calculate the length of time the birds had had to respond to their new predators.

The four-year study revealed that escape behaviors were significantly different in rural and urban habitats. Urban birds were more likely to produce fear and alarm vocalizations, but were less likely to bite or wriggle intensely; city birds also lost feathers at a higher rate and stayed in tonic immobility for longer periods of time. The differences in vocalization probably stem from the fact that urban birds live at higher densities and therefore have more friends and family that they a) want to save from a fate similar to theirs, and/or b) want to call to their assistance. Differences in the four other behaviors suggest that overall predation rates are lower in urban environments, causing city birds to "forget" how to respond appropriately.

The raptor censuses revealed significantly higher numbers of aerial predators in rural environments than in urban ones. Susceptibilities to sparrowhawk and cat predation were negatively correlated, suggesting that birds in most habitats either have to deal with one predator or the other, but not both. The only escape behavior that was significantly related to predation even after the researchers had accounted for phylogeny (or the fact that related species tend to have similar characteristics) was feather loss; the difference in urban and rural feather loss was positively related to susceptibility to sparrowhawk predation.

Both biting frequency and wriggle intensity were related to the length of time that birds had been living in urban areas. In species that had been urbanized for a long time, and therefore had much more time over which to show habitat-related divergences, biting frequency was higher in rural areas. Likewise, recently urbanized species tended to wriggle more intensely than species that had lived in cities for a longer period of time. Both of these patterns support the idea that predation is less intense in cities, and so urban birds have begun to lose some of their anti-predator behaviors. 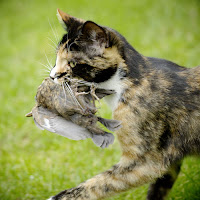 (Death by cat seems to be more common in urban areas, though overall predation levels are lower than in rural habitats. Image courtesy of Terrierman.)


The authors admit that other urban-rural differences could have contributed to the patterns seen here. Cats and sparrowhawks, for instance, are only two of many species that birds will encounter at different rates in different types of habitats; humans, dogs, rats, and foxes may also help shape avian behaviors. So, too, could variations in other environmental attributes such as habitat features or the density of conspecifics.

Assuming, though, that there are significant differences between urban and rural birds, and that they stem from the presence and behavior of particular predators, the next big question is, what is the chain of events that led to the new set of antipredator behaviors in urban birds? Perhaps urban settlers were bolder individuals, and these unreactive birds passed on their nonchalant behaviors to their offspring. Alternatively, maybe urban birds are simply responding to their immediate environment and would increase their antipredator behaviors if moved back to a rural environment. A third possibility is that ancestral populations of urban birds might have adapted to urban environments after arriving there and encountering a new predatorial landscape. If so, these findings suggest that other new and different characteristics in urban areas could drive the evolution of the species that dwell within them.