The supermarket setup makes it easy to forget that the groceries we buy were raised or grown somewhere, requiring resources such as water and fertilizer and, most importantly, space. When you multiply these requirements by every package in every store across the country, and then add together all the countries in which similar stores exist, you end up with some staggering numbers.

Take, for instance, the case of edible vegetable oil, the global consumption of which has increased sevenfold over the past three decades. Approximately one-third of this is palm and soybean oil that comes from the tropics. As the result of increasing demand for cooking oil in China, India, the EU, and the US, farms have had to expand markedly, tripling in Indonesia and Malaysia, and growing by a factor of 20 in Brazil and Argentina combined. Space for plantations is usually carved out of rain forests, leading to reductions in biodiversity and ecosystem health.


Conservationists Lian Pin Koh and Tien Ming Lee recently addressed this problem in a special issue of Biological Conservation aimed at advancing environmental conservation. Like many other conservationists, they hope that the increasing consumer interest in "green" products will provide an incentive for vegetable oil companies to reduce their ecological footprint by investing in new techniques and technologies. At the same time, the researchers also recognize a "reluctance of agribusinesses to compromise on yield and profit." In order to circumvent this problem, the researchers hope that consumers themselves might be convinced to alter their behaviors in order to ease pressure on farmers and companies, and, therefore, on the forests they threaten to convert into plantations.

To illustrate the potential power of the consumer, and to motivate buyers into action, Koh and Lee analyzed three different scenarios linking vegetable oil consumption with space use. They focused on the four main oil markets--India and China (which have expanding economies and are therefore likely to increase consumption over the next 100 years), and the EU and US (which currently demonstrate the approximate levels of consumption to which India and China might eventually rise). The first potential scenario, known as the "Aspiring East," (AE) is one in which EU and US consumption levels remain consistent at ~80 g per day, while Indian and Chinese levels increase dramatically (to ~81 g per day). The second scenario, the "Recalcitrant West," (RW) is one in which EU and US consumption again remains steady, but Indian and Chinese levels rise only moderately, to 56 g per day. The final scenario, "Converging Sensibilities" (CS) is one in which all four countries converge on the moderate, 56-gram-per-day consumption. 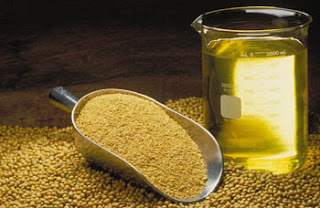 
Each scenario incorporated data on projected population growth, which would also influence demand for oil. Projected growth in India, for instance, is likely to increase consumption by anywhere from 16 to 46 megatons per year over the next hundred years; on the other hand, China's population contraction could lead to decreases of as much as 6.8 megatons per year. Across all four focal countries, these projected changes could lead to increased requirements of 3 to ~13 megatons per year. This, in turn, would be associated with conversion of forest to cropland. Under the AE, croplands were projected to increase to 11.7 megahectares in 2040, then fall to 7.3 by 2100; under the RW and CS scenarios, land use would follow a similar peak-and-trough pattern, but at levels approximately 60% and 70% lower, respectively.

In case your mind is spinning from all that math, the bottom line is that curbed consumption of vegetable oil could dramatically reduce pressure on farmers to expand their plantations onto rain forest land. It would be a good start to discourage countries with developing economies from becoming "Western" in their consumption patterns, but it would be most beneficial to do this while also encouraging Western countries to reduce their current levels of oil use. (Cutting this much oil out of the daily diet of every Western consumer could dramatically decrease the chances that tropical rain forests will be cut down to make room for palm or soy plantations. Image courtesy of MPR.)


Given that oil can be unhealthy in large quantities, this could also have health benefits. The 56 grams-per-day moderate consumption level from the RW and CS scenarios is one calculated based on World Health Organization recommendations for a healthy diet, meaning that, on average, consumers in the EU and US eating quite a bit more daily fat than they need. In fact, the authors calculate that the CS scenario could be achieved if "each person in the EU and US reduces his/her oil consumption by an average of 25 grams per day, roughly equivalent to forgoing one large serving of French fries." It's not often that going on a diet is associated with saving the rain forest, and it certainly provides a unique source of motivation to eat fewer fried foods. It is, as Koh and Lee state, "some serious food for thought."