Keeping a Leash on It in National Parks

One of the biggest challenges in wildlife management is balancing the needs of humans and wildlife. As important as it is to protect natural and cultural resources, it is also vital to help visitors enjoy themselves, experience the wonder of nature and, hopefully, feel inspired to offer political and/or economic support for future preservation efforts. The balancing act can be particularly difficult in urban settings, where high densities of people can be found utilizing public areas for a variety of purposes--including dog-walking, a sometimes contentious activity because of potential canine aggression, habitat destruction, and, of course, the animals' propensity to leave behind waste. 
Surprisingly, though, one of the main concerns about canine companions stems not from what things they might do, but, instead, the things that might be done to them--by dangerous wildlife such as snakes, alligators, and mountain lions. Because of this potential for pet injury, many parks have dog leash rules; unfortunately, however, these can be difficult to enforce. This prompted staff at the Fort Caroline National Memorial Area (Timucuan Ecological and Historical Preserve, Jacksonville, Florida) to think outside the box and develop a novel approach for encouraging park visitors to keep their dogs leashed. The method was so successful that Daniel Tardona, one of the park's officials, recently described it in the Natural Areas Journal in the hopes that other facilities might implement a similar program.

Originally, park officials attempted to enforce their rules by posting signs describing the leash regulations and threatening fines to all who did not comply; additionally, offenders were stopped by patrolling rangers and given warnings and citations. However, previous research has shown that these sorts of techniques alienate visitors by emphasizing limits, removing a sense of freedom, and generally making parks seem less welcoming. Further, while visitors may make short-term changes, they are unlikely to feel motivated to keep up their law-abiding behaviors over the long term. Fort Caroline staff were interested in "winning over" visitors by using a friendlier approach that allowed them to indirectly provide education about the logic and utility of leash laws. This sort of technique has been shown to be particularly useful in giving people information about the environmental, ethical, and stewardship aspects of conservation. Additionally, it allows them to have "free-choice learning experiences" that are more personal and long-lasting. 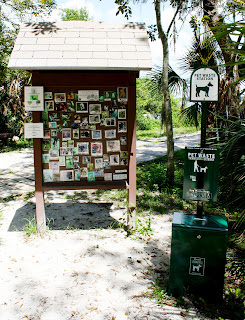 
The final plan of action centered on the erection of a 2-sided bulletin board labeled "Our Canine Visiting Friends." This was placed halfway between Fort Caroline's visitor center and the trailhead of a 1.6-km walking path frequently used by dog-walkers--in other words, in a place where it was unmissable. Park staff approached visitors to request permission to photograph pets and put their portraits on the board; the only catch was that all dogs had to be leashed during the photo shoot. When mentioning this requirement, staff could subtly discuss why the leash rule was in place, and emphasize the ecological and safety relevance of this requirement.

The bulletin board quickly generated interest, not just among people who had seen it first-hand, but also among those who had found out about it by word-of-mouth; visitors soon approached park staff in order to request participation in the program, and eventually the board became so full of photos that a second one had to be installed. Anecdotal evidence suggests that the technique was useful for more than just producing a collection of canine glamor shots: Complaints about unleashed animals have dropped markedly since the program was initiated and park staff now report fewer sightings. Further, creation of the board seems to have galvanized the dog-walking community into taking a more active role in creating and maintaining a canine-friendly environment at the park: In addition to more diligently cleaning up after their pets, dog owners have successfully requested an "expansion of services," including the installation of dog waste stations and the creation of a series of ranger-led interpretive hikes open to both humans and their canine companions. One frequent park visitor has even initiated a "dog patrol" during which volunteers place a lightweight pet jacket--labeled with a National Park Service VIP patch--on their dogs and patrol the walking trails, providing natural history information and dispensing advice about human and canine hazards in the park. 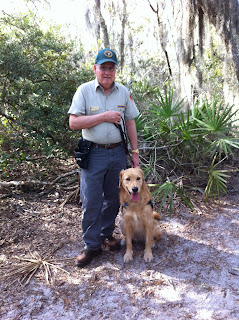 
Perhaps most rewarding has been the creation of a dialogue about non-canine issues, such as problems with feral cats and invasive plants. According to Tardona, this increased interest in the general ecology of the park "[supports] the notion that visitors with their companion animals can be facilitators of social interactions that increase the likelihood of social networking that inspires a sense of community and neighborhood good will and trust." In other words, dog-walkers and park staff now form a single cohesive community working together to preserve Fort Caroline's natural resources and make the park a place that can be enjoyed by many types of visitor, furry or otherwise.