There are many reasons to watch what you eat--nutritional value, chemical use during growth or preparation, carbon footprint, and any number of other factors related to a food's healthfulness and ecological impact. For consumers feeling overwhelmed by all these concerns, there is good news in a recent issue of Frontiers in Ecology and the Environment: A trio of American researchers has revealed that some supermarket choices allow consumers to simultaneously achieve multiple goals. Specifically, the scientists report that seafood lovers can reap health benefits from fish while also promoting sustainable fishing.

The research team initiated their study after noticing a number of public health campaigns about seafood and wondering whether the ads might be at cross purposes. Most of the education efforts focused on one of three issues: sustainability, fish nutrients (omega-3 fatty acids, in particular), and toxins. Sustainability is, of course, a positive characteristic; so is a high level of omega-3 fatty acids, which can, among other things, improve heart health. Toxins, including heavy metals and polychlorinated biphenyls (PCBs), have long been recognized as a drawback of seafood consumption. So what if consumers, in response to public awareness campaigns, buy unhealthy fish in an attempt to improve sustainability, or purchase unsustainable catch in an effort to be more healthful?

The current work aimed avoid this by determining the amount of overlap between these three characteristics. The researchers collected information on the traits from pre-existing datasets. For example, they utilized fishery sustainability rankings calculated by the Monterey Bay Aquarium and Blue Ocean Institute; another important source of information was FishBase, which provided data on each species' risk of becoming extinct as a result of being fished. Health benefits were measured as a function of omega-3 fatty acid concentrations, while mercury (one of the most extensively researched seafood toxins) was used to indicate health risk. 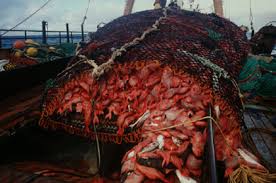 (A haul of orange roughy--a species that possesses high mercury levels and has been overharvested. Image courtesy of Southern Fried Science, which features an interesting article about whether these fish can ever be harvested sustainably.)


When they looked for relationships between each of these variables, the scientists discovered that the most unsustainable species were generally also those that had the highest levels of mercury contamination; further, there were no clear health benefits of these vulnerable fish. Species featured on the resulting "red list" include many tunas, swordfish, and several varieties of Pacific rockfish. Happily, the even longer "green list" features a number of healthier and more sustainable alternatives, including pollock, sole, and plaice. Since science is rarely ever black and white (or, in this case, red and green), the project also yielded a "gray list." This contains the names of several species for whom the sustainability-health relationship was more complex--animals with healthier populations but also high mercury levels, for instance. Still, this list is quite a bit shorter than the other two--both of which offer clear and useful advice for consumers looking to make purchases that are good for their own health and that of the wider ecosystem.

The researchers caution, however, that some of their information came from sources that are a few years old; it will be important to update their datasets and re-run the analyses periodically in order to generate up-to-date advice. This will be particularly vital for the data on each species' population numbers and vulnerability, since these are likely to fluctuate as ever more consumers seek the healthiest products available. There were also several species that were left out of the analysis because data were not available for all three metrics. Again, it would be valuable to re-run the analysis when and if these data are ever collected, since this information could provide further guidance on which fish can be safely eaten, and which should be avoided.

Supplementary photos can be found on the Anthrophysis board over at Pinterest.

You may also want to check out the Anthrophysis Facebook page!