Elasmobranchs--sharks, rays, and skates--are among the most endangered of marine organisms, with approximately one-third of all species considered either threatened or near threatened. Fishing is the biggest threat to these animals, many of which are either targeted deliberately or are caught accidentally after becoming entangled in fishing equipment. It also doesn't help that they tend to have slow reproductive rates and inhabit areas that are being degraded or destroyed.

(A flapper skate, or Dipturus batis. This elasmobranch resident of the Celtic Sea is classified as critically endangered. Image courtesy of Arkive.)


One of the most popular techniques for elasmobranch conservation--and, indeed, for the conservation of many marine species--is the creation of marine protected areas, or MPAs. These offer wildlife a refuge where human activities are diminished or completely abolished. While MPAs have clear benefits for predominantly sessile species such as barnacles or tube worms, they may not be as effective for mobile species such as elasmobranchs; after all, sharks and their kin can quite easily swim into nearby unprotected waters where they may become bycatch.

In a new study on elasmobranchs living in the Irish Sea, a team of Irish and British scientists report that MPAs likely can protect sharks, rays, and skates, but only if the locations of the protected areas are chosen wisely. Specifically, they suggest that "de facto refugia," or naturally occurring areas where low fishing intensity overlaps with high elasmobranch density, would make very useful MPAs. In fact, they identified one such area in the northeastern portion of the Celtic Sea, where the seabed's frequently shifting sands render trawling both "inefficient and unpredictable." The general lack of fishing here--despite the area's close proximity to a port and its fairly good returns on fishing effort--has allowed elasmobranchs to flourish. Elasmobranch diversity and abundance in this habitat could be threatened by future changes to fishing policy encouraging fishermen to utilize this area more fully. Thus, creation of an MPA here would not only protect a habitat that is clearly useful to elasmobranchs, but would also ensure that it continues to act as a refuge over the long term. Since the area is already neglected by the bulk of fishermen, managers probably wouldn't need too much money or manpower to maintain the MPA boundaries, plus they likely wouldn't hear too many complaints. 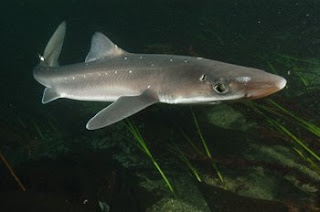 (A spiny dogfish, or Squalus acanthias. This species, which can be found in heavily fished areas of the Celtic Sea, is listed as vulnerable on the IUCN Red List. Image courtesy of Fish Index.)


Researchers and managers associated with other marine habitats should be pleased to know that the methods used for the current study were relatively simple and easy to apply to other systems. The scientists utilized data collected during the Irish Groundfish Survey, a standardized bottom-trawl survey that has been conducted annually since 1997. This dataset allowed them to keep track of the total number of individuals observed, species identity (and, therefore, density and overall richness of elasmobranchs), and body size. They also examined vessel monitoring system (VMS) records in order to assess where Irish fishermen spent the bulk of their time, and how productive those areas were. The researchers' final models controlled for environmental variables such as biogeographic region, seabed substratum, water depth, and exact latitude/longitude.

As for the future of this particular refuge in the northeastern portion of the Celtic Sea, the scientists recommend further studies exploring how/why the habitat contributes to elasmobranch biomass and richness. It may act as a nursery, giving juveniles shelter during a time when they are too small and weak to adequately defend themselves. It could also protect breeding adults and give them the opportunity to produce more and/or healthier young. It is important to understand these dynamics in more detail, since differential survival of particular age/sex/size classes can influence metapopulation structure--or, in other words, have cascading effects on elasmobranch populations throughout the region.