Of milk and men: use of dairy in early human societies

There are a number of animals that feature prominently in the daily lives of most Westerners, either directly or indirectly. Pet species like cats and dogs are, perhaps, the most obvious examples; others include the domestics from which we obtain meat and dairy--things like sheep, goats, and cows. Despite the importance of these animals, the majority of us are ignorant of how they came to be domesticated, or the ways in which our early ancestors interacted with these species and their products. Those are details that we can glean using three main techniques: archaeological digs in early human settlements; molecular analyses of bones, artifacts, and living animal descendants; and perusal of ancient documents and artwork.

The last of these was recently utilized by Irish geographer Finbar McCormick, who was interested in fleshing out our knowledge of how early human societies (in Mesopotamia, Egypt, India, and Europe) used dairy products. While this may sound like a rather esoteric research question, the results of the study have surprisingly broad implications: They help shed light on which groups of people developed particular types of dairying techniques and products, and which members of society were given access to dairy foods. This information, in turn, can be used to improve our knowledge of early religions, social hierarchies, health, and even the extent to which different countries interacted with each other.

Sheep, cows, and goats were domesticated many millennia ago (as long as 11,000, 10,5000, and 8,000 years ago, respectively). Documentary evidence for dairying, however, only dates to ~3,000 years ago--a fact that likely reflects a lack of historical evidence rather than a lack of actual dairying activity. According to McCormick, ancient sources can be difficult to interpret as a result of confusing or nonspecific wording. For example, there may be a single generic term for 'cheese' that fails to provide any information on whether it is soft or hard. This level of detail, however, is useful for understanding the amount of time and effort that would have been required for its creation, as well as guessing how and by whom might have been consumed.


Despite the drawbacks of working with scrolls and artwork, these sources can still shed light on early uses of dairy products. Mesopotamian literature for example, describes butter as being 'poured' from one container to another--indicating that it was likely clarified into a ghee-style product that could have been used like olive oil, and would have lasted much longer than modern-style butter in the hot Mesopotamian climate. The earliest Mesopotamian dairy image was found in a temple, which is unsurprising given that dairy items were only some of the many edible items offered to the gods. McCormick hypothesizes that the Mesopotamians might have pictured their goddess Ninhursag similarly to how the Egyptians envisioned Hathor--as a cow-like mother figure who could provide sustenance (in Hathor's case, directly to a young monarch, allowing him to become a 'true king').

Milk--and, indeed, cattle in general--seems to have been much more important in Vedic India than in the Fertile Crescent. As a result, cow imagery is liberally sprinkled through poems and hymns, and one Vedic text provides a list of the many different dairy products that could be obtained from a cow: milk (both fresh and boiled), cream, curds, sour cream, curdled milk, butter, ghee, clotted curds, and clotted whey. In addition to being consumed, milk products were also used liberally in religious ceremonies; among other things, ghee was a utilized as a fuel that could 'invigorate' the fires burning on altars.

It is unclear whether any of these earlier cheeses were prepared using rennet--a gut enzyme that facilitates the formation of curds and is essential to the production of hard cheeses. The first documentary evidence of rennet use dates to ~700 BC. In his Iliad, Homer describes 'grated' cheese--a form of dairy product that could only be generated through the use of rennet. Writing centuries later, Roman writers provided more detail on the dairying practices of the Greeks, describing both vegetable and animal rennets, and indicating which were most effective. Greek and Roman records indicate that cheese production was widespread, with markets supplying a wide variety of styles that had been made in distant locations; Pliny even wrote that Roman consumers could eat cheese imported from France.

Milk products appear to have had very little, if any, religious significance in mainland Europe. However, early documents suggest that dairy was recognized as being highly nutritious--though milk from sheep and goats was vastly preferred to that of cows. Despite this, the wording of several Roman texts suggests that excessive dairy consumption was considered uncivilized and barbaric. This seems to stem from negative feelings towards nomadic tribes that preferred keeping herds to engaging in agriculture. In Ireland, however, dairy could be a status symbol; while skimmed milk was a 'penitential' food, 'high-status' individuals could be found eating butter made from churned cream.

One particularly interesting aspect of Irish documentary evidence is the contribution made by fiction. For example, there is a traditional Irish story that mentions a cheese called tanach, which was loaded into a slingshot and flung at an enemy. The fact that tanach was able to withstand such treatment and act as a useful weapon suggests that it was a harder variety of cheese--something that is not made clear in other references. Mulach is another variety of hard cheese about which we know very little. There is, however, a myth about a giant with 'buttocks...the size of a mulach.' This description indicates that the wheels of this cheese must have been very large, indeed!

Though there is little evidence that dairy had widespread mystical use or meaning in early Britain and Ireland, there have been some intriguing discoveries that still require explanation. From at least the early Iron Age (4th century BC), small pots of butter were left in wetlands in both Ireland and Scotland. Although this practice become increasingly uncommon after the Middle Ages, some deposits were dated to as recently as the 18th century. This 'heathenish' folk practice was even incorporated into Christian worship in some areas, though it was clearly frowned upon by the Church. Thus, even in societies in which cows did not have a well-known or common religious significance, dairy products were still obviously regarded as being worthy and important. 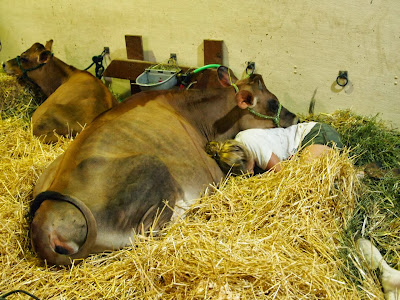 These sorts of details would be difficult to uncover using archaeological and molecular techniques, which is why McCormick believes that documentary sources can make important contributions to his field. Despite this, he also acknowledges that these types of resources may be incomplete, biased (in terms of style and scope), and inaccurate (particularly in the case of artwork, which may be intended to convey metaphor rather than fact). As a result, McCormick writes, we do still have much to learn about the significance of cows and dairy products to early human cultures. It is his hope, however, that researchers can combine all three types of analytical technique to 'arrive at [a] greater understanding of the role of dairying in early societies.'