The term "bioindicators" is often used to describe species that can be used to infer environmental changes. Birds are commonly used in this capacity because they demonstrate a number of variations that can be easily measured, including abundance and density patterns, physiological or morphological characteristics, and behaviors. One behavior that is frequently quantified in order to evaluate the effects of anthropogenic habitats is "flight initiation distance" (FID), or the distance at which a bird will take flight when approached by a human. If FID becomes increasingly small as human disturbances become increasingly common, then this metric may provide researchers a quick and easy way to evaluate species' tolerances to anthropogenic factors, as well as to rate how disturbed particular habitats are.

Most previous studies have typically compared FID between urban and rural sites only, rather than across an entire anthropogenic gradient. However, collaborators from the Chinese Academy of Sciences, the Xiamen Key Lab of Urban Metabolism, the Institute of Applied Ecology, Xiamen University, and the University of Rostock recently addressed this deficit by quantifying FID for 36 species living across an 8-site disturbance gradient associated with the rapidly developing Xiamen City, China. At each site, researchers approached focal birds on foot  at a steady pace; when the birds took flight, the distance between the takeoff point and the pedestrian was measured. One species, the little egret (Egretta garzetta), was present at all sites. This allowed the scientists to perform an analysis investigating whether birds of a single species are increasingly less wary as they are surrounded by more, and more frequent, human disturbances. By pooling data for all 36 species, though, the researchers could look for broader patterns--for instance, whether variation in FID generally reflects tolerance to urban conditions. In this case, "tolerance" was measured in two ways: abundance of each species of bird at each site along the anthropogenic gradient, and total number of sites occupied by each of the species. FID is strongly related to body size (since bigger birds need more time to get airborne), so for the second set of analyses the researchers controlled for this important morphological variable.

Data from 254 trials revealed that grey herons (Ardea cinerea) have the largest FID (at 41.5 m), while Temminck's stints (Calidris temminckii) have the smallest (at 9.0 m, but with a sample size of only 1 bird). The little egret showed the greatest variation in FID, and an analysis of the bird's habits across the entire anthropogenic gradient revealed that FID was negatively related to the degree of urbanization. In other words, birds in the least disturbed sites were much warier of humans than birds in the most disturbed areas. Across all species, size-adjusted FID was shorter for birds that were found across more sites and in higher densities--or, in other words, those that were "urban tolerant."

(A grey heron, Ardea cinerea, which displays a large FID)


Of 17 particularly tolerant species (identified using a calculation that compared expected and observed FID values given the birds' body sizes), 12 were present in multiple sites along the urban-to-rural gradient. For these species, the researchers were able to investigate how FID incrementally varied along the disturbance gradient. As expected given the results of the previous analyses, the majority of species exhibited increasingly shorter FID at increasingly disturbed sites; these patterns were particularly strong among the most tolerant species.

These results indicate that FID (or size-adjusted FID) can be used in situations where researchers need to quickly evaluate species-specific tolerance to urban environments. This could be useful, for instance, in predicting how many species in a given area might be negatively impacted by a proposed construction project, or even, to some extent, in guessing how strongly birds might respond when exposed to human activities. Specifically, birds with the greatest variation in FID were most tolerant to anthropogenic activities and habitats, so species with the least variation are those that are most likely to suffer from human disturbance. Measurement of FID within different habitats may also be a "quick and dirty" way to evaluate the amount of disturbance typically present within those areas. This could be particularly useful for researchers who need to quantify this characteristic in a large number of sites, or who are visiting a particular area for the first time and want to quickly learn a bit about its disturbance regime. 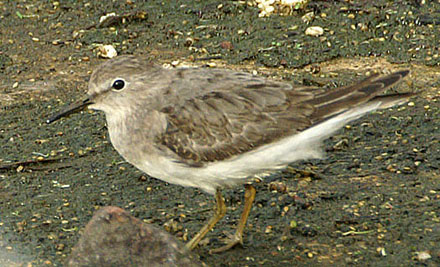 (Temminck's stint, Calidris temminckii, which has a very small FID)

Unfortunately, the data collected in this study--and in so many FID-related studies before it--are not sufficient to answer one of the biggest questions in disturbance research today: Are tolerant birds predisposed towards adapting to urban environments, or are urban exploiters evolving to become more tolerant? It is a difficult question to address, and the results may vary for different species. As the authors state, though, it is a worthy topic of future research, as the answer "could contribute to a better understanding of why some species can cope with urbanization and others cannot."

Thanks to the following webpages for providing the images used in this post:
http://en.wikipedia.org/wiki/File:Little_Egret_foot.jpg
http://cawa.co.uk/old/index.php?rm=51
http://www.birdskorea.org/Birds/Birdnews/BK-BN-birdnews-2005-10.shtml
Posted by Caitlin Kight at 10:49