Urban goose reproductive decisions are not impacted by their population densities

One of the most maligned urban birds in the U.S. is the Canada goose (Branta canadensis), which can be found at unnaturally high densities in the grassy fields of parks, golf courses, office complexes, and even the medians of highways. Among other species, such tight aggregations can have a significant impact on reproductive activities--for instance, by increasing rates of nest parasitism and cuckoldry.  However, despite the fact that urban geese often nest much closer together than their rural counterparts, and are noticeably more tolerant of the proximity of conspecifics, their breeding efforts do not appear to be significantly impacted by the high densities in which the birds occur in anthropogenic areas. 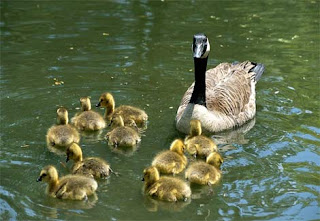 This was the surprise finding of collaborators from Michigan State University, the Harvard Graduate School of Education, and Ducks Unlimited. Their analyses focused on data collected from 253 individuals in 42 clutches over a total of 3 breeding seasons. The researchers targeted Canada geese breeding across a density gradient in an urban region of southern Michigan, USA. At the low end of the gradient, geese nested in marshy areas surrounded by forest; at the high end of the gradient, the birds were found in urban and suburban parks. Nearest neighbor distances varied by as much as 97 m between the two types of site, with more urban birds found much closer together.

Genetic analysis indicated that over half of all clutches (~60%) were free of either parasitism or cuckoldry; 26% showed evidence of the latter, while 14% showed evidence of the former. When the high-density and low-density samples were analyzed separately, there were marked differences in the frequencies of these alternative reproductive strategies: In high-density areas, 22% clutches had been parasitized, and another 22% showed signs of cuckoldry; in low-density areas, though, these values were 32% and 5%, respectively. Despite these superficial patterns, though, statistical models indicated that the occurrence of these reproductive strategies was not significantly impacted by breeding density. 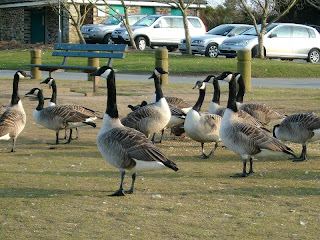 (Flock of Canada geese in an urban park)

Another surprise finding of the study was that parasitic eggs appeared to have been deposited into the nests of breeding females by closely related birds--the incubating animals' mothers and sisters, for instance. The researchers are not sure whether this reflects a deliberate collaboration between geese, or simply the fact that some females have learned to take advantage of birds who are tolerant of having neighbors in close proximity. Further research will be needed to investigate this issue in greater detail. The collaborators also feel that future studies that achieve higher sample sizes might uncover significant relationships not found here. After all, despite the lack of significant relationship between cuckoldry and breeding density, there was a very strong trend (a fourfold increase in cuckoldry between low- and high-density sites) indicating that density may be biologically relevant, if not statistically so.

The breeding patterns described in the study suggest a couple reasons why urban geese occur in such high numbers. For one thing, resources like food and nesting habitat do not appear to be limiting factors, allowing many urban birds to successfully produce large clutches without paying too many costs. For another, the birds don't seem very concerned about personal space, which indicates that group expansion will not be limited by social preferences for solitude. In other words, it looks like groundskeepers in urban areas will not have a respite from cleaning up goose messes any time soon.

---
For supplemental photos associated with this post, please visit the Anthrophysis pin board.

Thanks to the following website for providing the images used in this post:
http://piperbasenji.blogspot.com/2011/01/canada-geese.html
Posted by Caitlin Kight at 03:23