European badgers (Meles meles) are in the news again this week, this time as the focus of a study seeking to determine the efficacy of badger exclusion methods installed on cattle farms.

As recently discussed in another Anthrophysis post, badgers are an important reservoir of Mycobacterium bovis, the pathogen that causes tuberculosis in cattle. Previous research indicates that badgers and cattle appear to come in direct contact only infrequently; thus, scientists are still unclear on how M. bovis infections are transmitted between the two species. However, it is known that badgers can excrete the bacteria in feces, urine, sputum, and other exudates, and also that the animals frequently visit pastures and farm buildings. Therefore, it seems reasonable to suppose that badgers might contaminate cattle feed while defecating, urinating, and grooming in areas utilized by cows. The current study was designed to examine rates of badger visitation at cattle farms and investigate whether these might be diminished via the installation of exclusion structures. 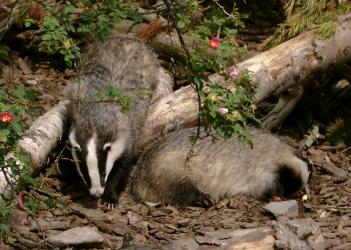 The work, conducted by researchers from the Food and Environment Research Agency and the University of Exeter, was performed on 32 farms in Gloucestershire--an area with a high incidence of bovine tuberculosis. During the first part of the study, the scientists used infrared, motion-triggered digital cameras to record badger visits to farmyards, in general, and to specific buildings in particular (e.g., those housing cows vs. those housing feed). During the second half of the study, farm buildings were subjected to one of four treatments: no exclusion measures, measures to reduce visits to cattle housing/feeding areas only, measures to reduce visits to feed stores, or measures to reduce visits to both cattle housing/feeding areas and feed stores. Exclusion measures were tailored to each farm, but primarily consisted of galvanized aluminum sheets installed as gates, panels on gates, or fencing; aluminum feed bins; or electric fencing. After these devices were installed, cameras were used to monitor changes in badger activity.

Over the course of the initial surveillance period, badger visits occurred on 59% of all farms, during as many as 71% of nights investigated. Activity was not uniform across all farms, however; some particularly popular areas (or, those with particularly active badger neighbors) received visits on more than 60% of nights. Intensity of badger visits was influenced by time of year, with activity peaking in the late spring and early summer.

Previous work has indicated that excluded badgers, when denied access to anthropogenic sources of food, simply use other resources on their pre-existing territories. Indeed, the quick abandonment of farm foraging areas by the badgers in this study suggests that the animals are not reliant on human sources of food (over the short-term, at least), but merely take advantage of them when they can. On the whole, the success of the exclusion measures is quite promising and suggests that badger-cattle contact on farms can be drastically minimized. (A badger brigade foraging in an anthropogenic habitat)


Although the prices of the exclusion treatments ranged widely (from 600 to 12,500 pounds sterling) and could be rather expensive, they were always more affordable than the average costs associated with tuberculosis-related herd breakdown (~30,000 pounds). Thus, the measures seem to be a good investment--but only if they actually impact the transmission of bacteria. Unfortunately, the current study was unable to measure this critical factor, which means that future research will be needed to investigate whether, and how, exclusion devices affect the spread of M. bovis. Additional work might also seek to understand what prompts badgers to visit farms in the first place, and why there is such variation in badger visitations among farms--or among individual badgers.