Follow-up on a previous post: Bird collisions and power lines

One of last September's posts looked at the results of a meta-analysis investigating whether avian collisions with power lines were reduced by the installation of bird flight diverters. The researchers who performed the study indicated that one drawback of their analysis was its reliance on previous work that often had small sample sizes, covered relatively small habitat fragments, or both. In order to address these deficiencies, the researchers have since completed their own field experiments examining the utility of both large and small spiral diverters, attached to either transmission or distribution lines. 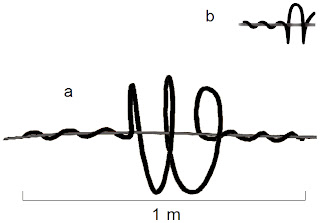 
Their field work was conducted in central Spain and focused on 5 regions classified as "important bird areas;" these also happen to be the main dry cereal farmland centers near the city of Madrid. Although the researchers were interested in investigating deaths of any bird species, they were especially concerned about mortality in threatened species such as the great bustard (Otis tarda), little bustard (Tetrax tetrax), pin-tailed sandgrouse (Pterocles alchata), and black-bellied sandgrouse (Pterocles orientalis), all of which are common in the region and are particularly susceptible to collisions.

Bird collisions were surveyed monthly between August 2001 and December 2010, after which 15 of the 22 focal power lines were designated as experimental. All lines were monitored for an additional year ("before treatment"), fitted with spirals or left bare to act as the control treatment, and then monitored for a second year ("after treatment"); monitoring consisted of patrolling each power line on foot and looking for carcasses within a 25-m band on either side of the line. Some of the power lines were "transmission lines" (carrying electricity from a power plant to a receiving station), while others were "distribution lines" (carrying electricity from a receiving station to customers). All transmission lines were fitted with large spiral diverters, while distribution lines were fitted with either large or small spirals. This allowed the researchers to determine how mortality was impacted by three major factors: type of power line, presence/absence of diverter, and type of diverter. They ran separate analyses for total numbers of species observed, casualties observed, estimated collisions (using previously developed formulas that extrapolate from survey data), and collisions involving the most common species in the area (doves, great bustards, and little bustards).

(Schematic showing the difference between transmission and distribution lines)

Over the study period, the researchers located 521 carcasses of 45 bird species--19 of which were species of conservation concern. Across the 15 treatment lines, 11 had a general decrease in mortality post-marking, while only 4 experienced an increase. Overall, this resulted in 88 fewer bird deaths, or a 47% reduction in mortality. The 521 carcasses found here are estimated to represent a whopping 14,282 collisions, or an average of 8.2 per month per km of power line. Analyses of marker efficacy using these collision data, instead of the absolute numbers of carcasses, again suggested that diverters are successful at keeping birds away from lines; 316 fewer birds, or a 9.6% reduction in mortality, were estimated across the cumulative length of treated lines. Treated lines had significantly lower mortality rates than control lines, further highlighting the usefulness of this mitigation technique.

Additional statistical analyses revealed that large spirals were similarly useful when installed on both transmission and distribution power lines. Likewise, small and large spirals had similar efficacy on distribution lines. However, species-specific analyses indicated that some species did notice differences in line and marker type, even if birds in general did not. For instance, while little bustard mortality was reduced by any type of wire marking, irrespective of location or size, great bustards responded more positively to marking of transmission lines, and to the use of large spiral diverters; dove mortality, on the other hand, did not vary as a result of either of these factors. (Little bustard, Tetrax tetrax--a species that responded similar to all types of wire marking, regardless of location or size)

On the whole, it appears that installation of bird flight diverters is a useful technique for reducing avian mortality at power lines. Although a 9.6% reduction in collisions may not seem like much, the authors of the current paper stress that this result could be highly biologically significant--especially for species of conservation concern, such as the great bustard, or in particularly sensitive habitats, such as migration corridors or areas where power lines happen to be located next to important roosting or staging sites. Another pleasant surprise was that small diverters were, for the most part, as effective as large diverters. Because the smaller spirals are lighter, they are less likely to cause power lines to come down (a problem that is particularly common in inclement weather).

Despite this general good news, the researchers caution land managers to keep in mind that the current results might not be broadly applicable to all systems. Species' responses to power lines vary as a result of many factors, including wing loading, aspect, and visual field, and so different species assemblages will vary in their susceptibility to power lines; environmental factors, such as habitat openness and weather conditions, will also play a role in determining mortality. Further work is still needed to understand whether collision rates are impacted by other human disturbances (such as loud noises and moving distractions), and whether spiral color impacts the extent to which birds are diverted away from lines. Perhaps most importantly, the authors suggest that researchers need to identify collision hotspots in order to determine the most useful place to install diverters of all sizes and colors.

Thanks to the following websites for providing the images used in this post:
http://www.plosone.org/article/info%3Adoi%2F10.1371%2Fjournal.pone.0032569
http://www.birdinginspain.com/blog/birding-and-wildlife-trips/birding-barcelona-the-lleida-connection/
http://www.aps.com/general_info/Siting/faq.html