Many important questions were raised by the 2010 Deepwater Horizon disaster. While some of these focused on oil drilling, sources of energy, and disaster relief services in the US, many biologists concentrated on the efficacy of ecosystem-wide emergency response services. In particular, the catastrophe spurred researchers to ponder our ability to adequately measure the intensity of environmental catastrophes--and then respond appropriately. 
One outcome of that pondering is a report from an international team of collaborators who have found that traditional methods of measuring oil spill-related wildlife fatalities may underestimate the number of animals affected.The results were produced from a research project on northern gannets (Morus bassanus), the largest sea bird breeding in the North Atlantic and the only bird species of all-Canadian origin to be impacted by the Deepwater Horizon spill. After breeding on the Canadian coast, gannets migrate south and winter along the US shoreline from Maine to Texas; many that were feeding in and around the Gulf of Mexico in late April 2010 were the unlucky casualties of the recent oil disaster.

In the current study, a comparison of mark-recapture data (collected from the recovery of bands from dead birds along the shoreline) and bird-borne tracking data (collected from global location sensors and satellite tags attached to the birds) revealed that the two techniques estimated very different oil-related mortality rates. While band data suggest that 2.2% of adults and 12.8% of immature gannets use the Gulf of Mexico over the course of a year, tracking data indicate that these numbers may be as high as 28.3% and 22.2% in the non-breeding season alone. To put that into perspective, that is the difference between ~13,300 and ~66,100 adult gannets, or ~42,000 and ~52,509 juveniles, respectively. Further, the tracking data allow scientists to assess when the birds arrive in, and depart from, the Gulf. Both age groups begin appearing as of the first week in November, with adults generally heading back north by the first week of April. Juveniles, on the other hand, remain in the south much longer, which means that this was the main age class in the Gulf during the time of the spill. 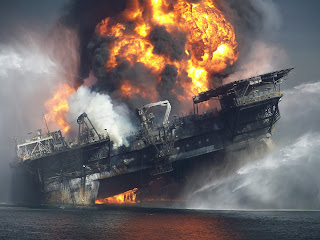 
Overall, the results indicate that post-spill mortality estimates were probably very conservative. There may have been several thousand more gannet deaths than previously realized--particularly among younger age classes--but the implications of this are not yet understood. Most northern gannets do not attempt to breed until they are 5-7 years old, which means that the population-level impacts of the Deepwater Horizon event may not be noticeable for several more years--when the birds that were killed during the disaster would have begun their first nesting attempts. On the other hand, the researchers state that gannets may be "buffered by age-related life-history processes," and not suffer any serious population declines. Presumably, the positive outcomes of this scenario would be related to reduced competition pressure (as a result of the recent die-offs), leading to improved juvenile survivorship among chicks produced by surviving adults. 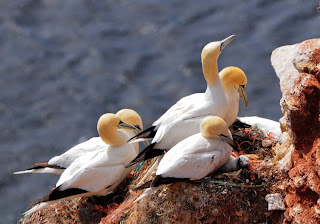 Either way, only time will tell. To date, the only hints of the outcome are 2011 photographs of birds breeding in the Cape St. Mary's colony; the plumage of several birds was covered in a dark substance that appeared to be oil, though this could not be confirmed. Continued monitoring--not just of population numbers but also of survival, physiology, reproductive success, and migratory movements--will be used to assess the health of this species.

Although these gannet-specific results are interesting and important, the researchers stress that one of the most important take-home messages from their work is the disconnect between banding and tracking data. The latter likely underestimate mortality rates because they do not account for the many birds that die at sea and sink to the ocean floor rather than washing up on, or flying to, beaches; this suggests that post-pollution conservation and management proposals may not be suitably tailored to effect a comeback for negatively impacted animals. Further, this is probably an issue for species other than gannets, and, indeed, for non-avian wildlife as well.

Thanks to the following websites for providing the images used in this post:
http://en.wikipedia.org/wiki/File:Two_Gannets_edit_2.jpg
http://zoestrauss.blogspot.co.uk/2010/12/deepwater-horizons-final-hours.html
http://onejackdawbirding.blogspot.co.uk/2009/06/tragic-consequences-of-northern-gannet.html
Posted by Caitlin Kight at 06:59