Has anthropogenic disturbance set a "trap" for northern cardinals?

An "evolutionary trap" is a situation in which changing environmental conditions render species' usually beneficial behaviors unhelpful or even dangerous. Researchers have suggested that these traps may occur with some frequency in anthropogenic environments, which would explain the disappearance or decline of many species from these habitats. 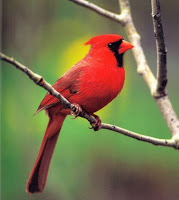 
Northern cardinals (Cardinalis cardinalis) are one of the latest species proposed to have fallen in to such a trap. These bright red birds achieve their coloration by consuming carotenoid-rich foods. Those that forage most successfully are the most colorful, and this signal of feeding prowess is used to advertise quality and good condition both to potential mates and rivals; the brightest males are typically those who produce the most, or best, young.

In human-disturbed areas, a prominent source of carotenoids is fruiting Amur honeysuckle (Lonicera maackii) plants, which provide plenty of pigment but not as much nutrition as many alternative species. Thus, in urban areas full of this exotic vine, there may be a disconnect between color and condition, which could make it difficult for females to choose those males that will help them produce the most young. A further complication is the fact that cardinals appear to prefer breeding habitats with a high density of the early-leafing honeysuckle. By securing these nesting sites, males can get a head start on their rivals, wooing the best females and utilizing food resources before the other birds begin their own reproductive efforts. Unfortunately, honeysuckle nests are at an increased risk of predation--partly because the vines just don't provide very good cover, and partly because they are the only available nesting habitat early in the season, making it easy for predators to figure out where to look for prey. Brighter males are more likely to win contests for possession of these breeding areas, which introduces another deviation from the standard relationship between color and reproductive success.

In order to assess whether urban habitats--specifically, those dominated by the invasive Amur honeysuckle--act as an evolutionary trap to breeding northern cardinals, a team of researchers from the Ohio State University recently quantified the complex relationships between feather color, habitat characteristics, and annual reproductive success. At each of 14 study sites along an urban-to-rural gradient, the researchers collected feather samples from adult birds, located and monitored active nests, and quantified habitat traits--in particular, the density of understory vegetation and the presence of exotic shrubs. Because breeding adults were marked with unique leg bands, the researchers could follow individual birds across the entire nesting season in order to calculate their annual productivity, or total number of fledglings produced. 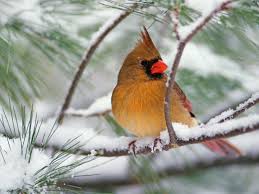 
In rural areas, bright males acquired nesting territories with high levels of exotic woody vegetation--a habitat category dominated by Amur honeysuckle. These same males bred earlier in the season and had lower annual productivity, fledging approximately 20% fewer young over the course of the breeding season. In urban habitats, on the other hand, brightness was not associated with nest site structure, the earliest breeders had duller plumage, and there was no relationship between brightness and productivity.

In other words, urban areas do not appear to act as evolutionary traps for northern cardinals; surprisingly, it is rural areas that seem to be more dangerous. In this case, though, the drawback of rural environments is still related to anthropogenic disturbance: the introduction of invasive species. Honeysuckle plants attract the brightest males in the best condition, but breeders in these substrates produce the fewest young. Unaware of this disconnect between color and quality, females continue selecting their mates using a now inaccurate checklist of sexy attributes, and ultimately suffer reductions in breeding success. The absence of this same scenario in urban areas is probably related to the fact that the overabundance of resources (carotenoids and breeding substrates alike) increases equality among males. As a result, females may base their mate choice on other (potentially more accurate) signals of quality, such as males' songs or the outcomes of physical fights between males. 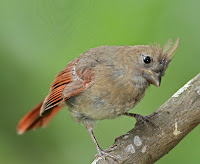 (Fledgling northern cardinal--identifiable thanks to its brown bill)


Many factors will influence whether these urban-rural differences will have a long-term impact on cardinal populations. One important factor is whether, and to what extent, birds move between habitat types; this also affects gene flow. Another issue is "temporal heterogeneity," or how consistent these ecological conditions are over time. If honeysuckle plants are quickly replaced by other species in rural areas, they may not have too much of a cumulative effect on breeding birds. As is so often the case with ecological research, more data will be required to explore these possibilities.