Depression is thought to affect approximately 3-4% of the global population each year, and while traditional therapies can improve the mental health of many people, others find that these offer no relief. Thus, researchers have long explored alternative or complementary treatments that might benefit these patients, but the efficacy of many such techniques has not yet been rigorously tested.

One example of a promising but under-studied therapy is "green care" or "care farming," a type of intervention that uses "nature and the natural environment to improve or promote health and well-being." Participants in green care programs are offered the opportunity to spend time volunteering on farms, where they learn new skills, interact with other workers, and come into contact with farm animals. These sorts of experiences, which can improve mood and outlook by increasing self-efficacy and self-esteem, are known to be individually beneficial in the treatment of depression, and so may have a positive synergistic effect as well. 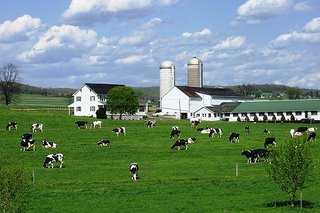 
In the only previous randomized control study of a green care program, researchers found no immediate differences in the mental health of patients engaged in this "alternative" therapy and those given more traditional treatments. However, green pare participants did seem to be doing better at the six-month follow-up period, suggesting that further research on this therapy might yield interesting results. Improvements were particularly marked among individuals with affective disorders, indicating that green care might be especially beneficial for patients with depression.

These findings inspired a team of Norwegian scientists to perform a new study examining the effects of a 12-week animal-assisted intervention on clinically depressed patients. The study ultimately included 27 individuals, 16 of whom participated in green care activities and the other 13 of whom received traditional therapy. People in the former group visited one of 11 participating dairy farms for 1.5-3 hours twice weekly over a 12-week period. Because interactions with animals are known to improve mental health, participants were directed towards activities associated directly with dairy cows; despite this constraint, each individual could decide the exact form that interactions would take--for instance, grooming, mucking, feeding, caring for calves, or milking. 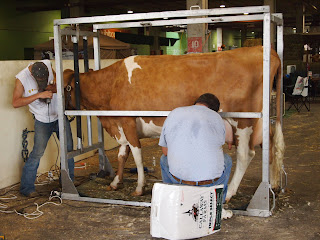 
Over the course of the intervention, the researchers distributed questionnaires aimed at assessing severity of depression (the Beck Depression Inventory, or BDI), anxiety (the State-Trait Anxiety Inventory-State Subscale, or STAISS), and self-efficacy (the Generalized Self-Efficacy Scale, or GSES). Participants filled out all questionnaires at recruitment, the beginning of the intervention period, and at a three-month follow-up; they also filled out the BDI and GSE at four and eight weeks into the therapy.

Individuals in both groups experienced "positive developments in all assessments." However, similar to the previous green care study, the current work did not reveal any significant differences in mental health between the green care and traditional therapy groups, both during the intervention period and at the three-month follow-up. Interestingly, though, depression levels declined significantly between two time points (recruitment and the end of the intervention) in green care participants, and then remained steady thereafter; self-efficacy was also found to markedly improve over the study period. A similar intensity of change was not observed among control individuals. Further, the official criteria for clinical improvement were met in nine of the green care individuals, but only three of the control participants; likewise, while six green care patients returned to "normal" levels on a scale of clinical depression, this was only true for one control individual. Thus, the alternative therapy appeared to be slightly more beneficial, and aid a larger number of people. 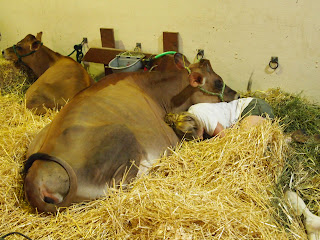 (Previous research has indicated that people can form bonds with farm animals as well as more "traditional" pets, and that these relationships can help alleviate depression.)


The researchers hypothesize that one of the main benefits of the dairy farm experience is an increase in self-efficacy, facilitated by the opportunity to learn new skills and adapt to a new environment; this likely combated feelings of "diminished self-worth and self-esteem" typical of many people with clinical depression. The green care experience probably also reduced inactivity, withdrawal, and avoidance of others--three other common characteristics (or even causes) of depression. Additionally, as found previously in other studies, interactions with animals seemed to have a soothing effect; many participants reported feeling calmer when in the presence of cows.

Although this study again failed to find any significant difference between traditional and green care treatments, the authors suggest that the latter are still worthy of additional attention. Their sample size was fairly low, and their treatment period relatively short; additionally, each participants could engage in a number of different farm activities rather than following one consistent farming routine. Thus, further work might not just aim to include additional individuals and examine their improvements over a longer period of time, but also standardize their routines or even explore more "complex and challenging" work tasks. This sort of information might enable therapists to tailor green care treatments for people with different characteristics or interests. Even if further studies are not pursued, green care appears to achieve, at worst, similar improvements to those derived from traditional treatments. Thus, this therapy may be a suitable substitute for patients for whom traditional treatments are not feasible or desirable.