Anyone who has spent much time watching animal behavior has probably, at some point or another, wondered what goes on inside (non-human) animals' brains--Are they thinking, or just acting intuitively? Do they have minds, or just a collection of neural matter? Although the answers to these questions may not immediately seem to have any practical purpose, human perceptions of animal cognition actually play an important role in determining our attitudes towards animals and animal use. As a result, these issues may have serious implications for policies related to medical testing, scientific research, husbandry practices, and the pet trade, to name a few examples.

Attitudes about animal cognition are also likely to influence the receptiveness of lay audiences to scientific results on this topic--not only in terms of people's overall willingness to learn about animal thought, but also their interest in one subset of cognitive research over another--with implications for the funding of, and progress in, these fields. Thus, it is useful to understand "what people think about animal thinking" in order to develop education tools such as classroom curricula or museum exhibits.

(Alex the parrot, who, at the time of his death, had an English vocabulary of 100+ words. Here, he is demonstrating his ability to distinguish between different numbers--or the shapes thereof--and colors.)


The latter of these outputs was the goal of three collaborators from the City University of New York and Edgewater, Maryland's Institute for Learning Innovation. In order to optimize their product, they first sought to better understand how people perceive animal thinking. To this end, they developed a two-part study utilizing surveys that explored several topics: human attitudes towards the idea of animal thinking, which animals are perceived to be thoughtful, what different types of intelligence (if any) animals are thought to display, and whether public perception of these issues aligns with the results of scientific research on animal cognition.

After perusing the academic literature, the researchers identified four main dimensions of animal cognition that have received attention from scientists: learning and memory, communication, numerosity (e.g., an understanding of numbers), and awareness. Subjects' familiarity with these dimensions was explored in the first survey, which was conducted among visitors at the New York Hall of Science and the Staten Island Zoo.

The majority of survey participants indicated that they had previously pondered animal thinking, and many were familiar with animal cognition topics either from popular media presentations or from their own previous experience--especially with pets. Survey responses suggested that most people perceived a "cognitive hierarchy" topped by humans;  pet species such as dogs and cats, and charismatic social animals such as dolphins also seemed to rank highly. The researchers noted that many survey responses were disconnected from one another, and that few respondents summarized across multiple animals in order to offer a generalized theory of animal cognition.


Answers to questions about the cognitive dimensions revealed that most people were vaguely familiar with certain mental abilities of animals, but could not offer many details about how these abilities develop, why/when they might be applied, or the many varieties that can be seen within and among species. For instance, although people readily agreed that animals could remember things, few answers described memory capacity or differentiated between varieties of memory; further, while most participants recognized that animals communicate, people commonly focused on conspecific signaling and ignored information transfer between species.

The researchers used these results to design a second, online survey that could a subset of these issues in greater detail; they were particularly interested in understanding whether the public is likely to attribute certain mental abilities to some species rather than others, and why this might be. Since familiar domestic animals had repeatedly been mentioned during the first survey, the researchers also wanted to contrast attitudes about these animals with attitudes about wild species, and, further, to investigate whether pets were perceived differently than other types of domestics (such as animals destined to become food). To this end, the survey consisted of a series of statements (such as "Animals cannot draw on their memory to plan for the future" and "When a dog protects its owner it is just responding to training") to which respondents could agree or disagree along a six-point scale.

The survey was distributed to over 500 participants who indicated they had recently visited some type of science/nature exhibit. Somewhat surprisingly, most answers had a mean value of 3-4, indicating that respondents were neutral, and did not strongly agree or disagree with the statements. The strongest responses were to the questions "Birds do not use meaningful calls to intentionally communicate with each other" and "Elephants can multiply and divide;" although most people appear to recognize the importance (and, potentially, the intricacy) of avian vocalizations, few are willing to believe that elephants can do math. 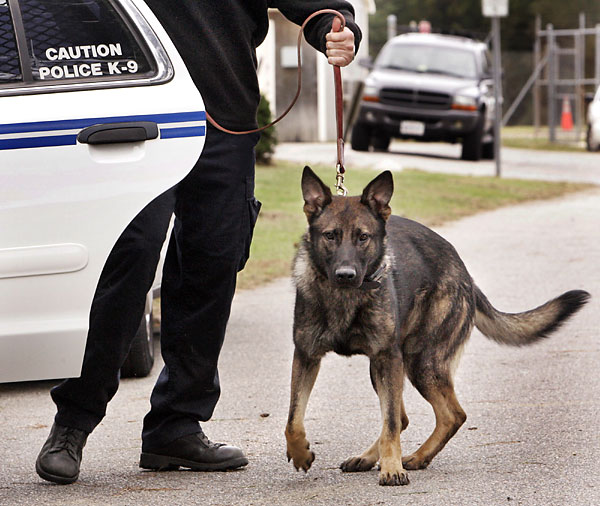 (A young police dog, which will go to school to learn a variety of skills such as identifying illegal substances, finding injured people, and bringing down criminals without causing lasting damage.)


Given the results of the previous survey, it was not surprising to find that lay people do not seem to conceptualize animal cognition in the same way that scientists do. Specifically, the average person tends to think of an animal as either being intelligent or not; there is no recognition of the four dimensions of intelligence perceived by researchers. Further, most individuals do not seem to have opinions on the mechanisms behind animal thought.

As anticipated, attitudes about animal cognition varied depending on the species identified. Wild animals, cats, dogs, and "higher" mammals were perceived as being more intelligent than farm animals; in general, there seemed to be a tendency for people to rank animals according to phylogeny, though this issue requires further exploration. Respondents readily agreed that many animals possessed "survival-based abilities" such as escaping from a predator or obtaining food, but seemed to regard these as instinctual behaviors rather than indications of thoughtfulness.

Based on this final result, the researchers suggest that animal cognition exhibits might be most palatable if they emphasize animal thinking in a survival context.  Additionally, the authors believe that it would be valuable to focus on how/why cognition developed in wild species that later became domesticated. This would provide an evolutionary context to animal thinking and highlight the fact that animal intelligence goes beyond an ability to learn how to do tricks and solve puzzles while in captivity.

(Many primates, such as these Allen's swamp monkeys, Allenopithecus nigroviridis, use tools to acquire or process food items.)

Because so many of the survey responses were neutral, the researchers feel that the public is "likely to be open to considering evidence that animals have higher-order thinking abilities." This is further supported by the overwhelmingly positive feedback supplied by most participants, indicating that people generally enjoyed contemplating these ideas. Thus, the authors conclude that "popular media and museum exhibitions have the potential to build stronger connections between humans and other animals by helping people develop an understanding of the numerous and varied findings from scientific studies on how other species think."

---
If you enjoy reading Anthrophysis, why not check out its Facebook page?