Late last year, I described evidence suggesting that urban and rural song sparrows (Melospiza melodia) have different "personalities," or suites of behaviors that show repeatability within individuals. Recently, similar patterns were found for an Old World relative, the house sparrow (Passer domesticus), providing further support for the hypothesis that rural and urban habitats select for different types of individuals. 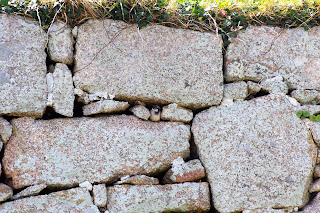 The current study was conducted by a team of Hungarian and Polish scientists who reported their findings in the academic journal PLoS ONE. They examined four major behavioral traits: fear of new objects, fear of new foods, risk-taking, and total activity levels. Lower levels of the first three behaviors, and higher levels of the fourth, have previously been associated with an increased likelihood of colonizing, and thriving in, anthropogenic habitats. Thus, the researchers expected to find that urban birds would be less fearful of novel objects (or "neophobic"), but take greater risks and be more active, than their rural counterparts. If urban house sparrows have personalities that are distinct from those of rural sparrows, correlations between these diverse behaviors should be different in the two types of environment; further, there might be different levels of personality variation within city and country populations.

To explore these possibilities, the researchers collected sparrows from four populations living along an urban gradient in Hungary--in Budapest, Veszprém, Nemesvámos, and Dóramajor, to be specific. Birds caught at the first two sites (at a train/bus station and fast food restaurant, respectively) were considered "urban," while birds from the latter two (a dairy farm and horse/cattle breeding farm, respectively) were considered "rural." Each bird participated in five trials: a control consisting of a normal daily routine, exposure to a novel object, exposure to a novel food item, exposure to a "friendly" heterospecific (a stuffed collared dove, Streptopelia decaocto), and exposure to a "predatorial" heterospecific (a stuffed sparrowhawk, Accipiter nisus). During each trial, researchers observed the focal bird's feeding activity--in particular, its latency to feed after the treatment had commenced, and the total number of hops it made throughout the trial (i.e., its activity level). 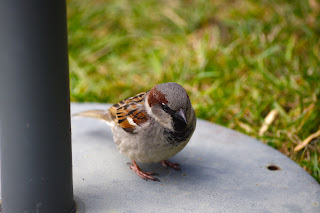 (A house sparrow visiting a cafe in order to take advantage of crumbs left by messy diners.)

Surprisingly, urban and rural birds had similar feeding latencies in all treatments. However, a population-by-population analysis revealed significant differences along the urban gradient: between the two rural populations during the novel food trial, and between Nemesvámos (rural) sparrows and all others during the predator trial. These analyses revealed that Nemesvámos birds have lower levels of food neophobia, and higher levels of boldness, than other individuals; this is exactly the opposite of the predicted pattern. In fact, an abundance of bold individuals and a scarcity of shy individuals caused the Nemesvámos population to have unexpectedly high and low levels of inter-individual behavioral variation in the food neophobia and raptor tests, respectively. The total number of hops was similar for both urban and rural birds, and across all trials--with the exception of the novel food trial, during which all birds were more active.

In both urban and rural populations, the different types of behavior were highly correlated with each other, indicating that both urban and rural sparrow display "personalities." However, personality types varied according to habitat. In urban birds, moderate levels of object neophobia and risk taking were associated with very low activity levels; food neophobia was not a characteristic of city birds' behavioral syndromes. In rural birds, however, high levels of object and food neophobia were associated with moderate levels of risk taking and low levels of activity. Thus, not only are different traits included in the syndromes, but the relative contributions of those traits vary depending on population. 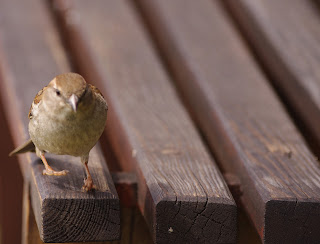 The presence of habitat-specific behavioral syndromes suggests that urban and rural environments place different selection pressures on their inhabitants. The variations observed across the 4 sites examined here indicates that these pressures are strongest at moderate levels of urbanization, though this may be an artifact of the sampling methods used in the current study; testing of more individuals from additional sites along the urban gradient would be needed to clarify this issue. Sampling of sites in various stages of urbanization might be helpful for determining whether successful colonization of urban habitats is associated with one suite of behavioral traits, while continued success is facilitated by another; there is currently little research directly addressing this potential multi-stage process.

Another unanswered question is whether urbanization itself affects bird personalities, or whether individuals are responding to habitat features, such as fluctuations in food distribution or risk of predation, associated with urban environments. The authors hope that a better understanding of these details will help explain the "dynamics of animals' behavioral adaptation to urban life," thus allowing us to better predict the impacts of continued human expansion, and, in general, improve our understanding of how animals adapt to changing environments.