Why do our closest primate cousins spend more time suckling their young than we typically spend nursing ours? This question has been heavily debated over the past several decades, but to date there is more information on the implications of our relatively short lactation periods than on their causes. One reason it has been difficult to address this question empirically is that there is not much variation in large-brained primates in some of the traits that are hypothesized to impact suckling behaviors; thus, it is difficult to explore how these characteristics could affect lactation and parenting. However, a team of European scientists has sidestepped this issue by analyzing suckling patterns--or, to be more specific, time to weaning (TTW)--across all mammals, while simultaneously taking into consideration other important life history characteristics such as brain size. This allowed them to examine data from a large and phylogenetically diverse group of animals--67 species from 67 genera across 12 mammalian orders. The results of their analysis led them to conclude that human weaning patterns are driven by our carnivory, a practice that was first begun by our early hominid ancestors 2.6-2.0 million years ago. For each of the 67 species examined in the current study, the researchers collected a variety of data allowing them to explore several different potential drivers and correlates of TTW. First, they considered two measures of mass: brain mass, which impacts the length of time it takes for an offspring to mature, and female body mass, which could influence lactation by imposing metabolic limits on mothers. It turned out that brain mass was a better predictor of time to weaning, though both variables accounted for a fair amount of variation in TTW. Interestingly, the researchers found stronger relationships when looking at time to weaning post-conception rather than post-birth, despite the fact that the latter metric is more commonly used. The relationship between brain mass and TTW remained significant even after body mass was controlled for, providing support for the theory that weaning patterns have developed as a result of offspring need rather than female limitations.

The second variable of interest was limb biomechanics. A recent comprehensive study found that animals that locomote with the entire sole of each foot on the ground--i.e., in the "plantigrade" posture, as seen in humans, raccoons, bears, and rabbits--take significantly longer to take their first steps when young. This is an important developmental milestone that the researchers hypothesized might be related to other developmental events such as weaning. Indeed, it turns out that "plantigrade animals" take longer to wean, even after differences in brain mass are accounted for.


Finally, the authors explored the effects of diet--carnivory, omnivory, or herbivory--on TTW. Here, following the suggestion of RA Foley, species were defined as "carnivorous" if they displayed a "shift from 10% to 20% of food from meat;" this reflects the difference in diet between chimpanzees (5% meat) and hunter-gatherers in environments like those of our early human ancestors (20-50% meat). Carnivores were found to wean earlier than both omnivores and herbivores, the latter two of which weaned in similar time frames. Using the patterns found for actual species, the researchers predicted TTW for a hypothetical carnivore and non-carnivore with a human-like brain mass; this value was then compared to weaning times observed in 46 human "natural fertility societies" (i.e. those in which birth control use does not skew reproductive patterns). There was a much better match between the expected and observed values when the predictor diet was carnivory rather than omnivory/herbivory, and in fact the mean predicted value of a 1162-day TTW was surprisingly similar to the observed mean of 1129 days.

In addition to investigating each of these TTW predictors separately, the researchers also compiled a full model which simultaneously explored the effects of brain mass, limb biomechanics, and dietary profile on TTW. Cumulatively, these three variables accounted for 89% of variance observed across the mammals examined here; 75.5% of this could be attributed to brain mass, 10.3% to limb biomechanics, and 3.4% to diet. Given the similarities in brain mass and limb biomechanics between humans and primates, the authors conclude that a (or even the) major factor driving differences in TTW between humans and other primates is our carnivorous diet: "...dietary profile has had a profound evolutionary effect on weaning in mammals," and "carnivory per se may provide not only a necessary but also a sufficient explanation for the difference between humans and great apes with respect to the timing of weaning." 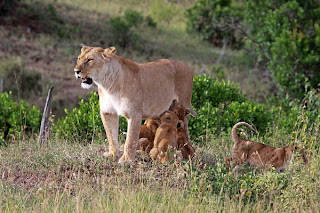 The researchers admit that cultural factors, such as cooking and help with child care from other family members, are also likely to impact weaning, but suggest that these are more likely to explain the relatively minor variations among societies rather than the major variations observed between humans and other primates. Increases in meat consumption could have fueled the generation of more nutritious milk, allowing mothers to shorten the period of time over which they lactate and suckle young. This, in turn, would have decreased interbirth intervals and therefore increased rates of reproduction, thereby facilitating an expansion of the human population. As the authors state, this would have "affected [hominid] population dynamics profoundly." Thus, these findings support previous theories that at least some aspects of hominid evolution were associated with dietary changes.

---
If you enjoy these posts, why not check out the Anthrophysis Facebook page?