Anthropogenic noise acts as a "filter" of avian communities

One of the hottest topics right now in the field of animal communication is the relationship between human noise and birdsong. A number of studies have found that birds sing at a higher pitch in the presence of noise pollution. This upward shift moves their songs away from low-pitched human sounds such as traffic and construction noise, and improves the likelihood that the animals will be able to hear each other and continue communicating--though potentially with greater difficulty and less clarity--even in the presence of their noisy two-legged neighbors. There is evidence that birds avoid noisy areas, particularly when they are incapable of making these vocal adjustments, since it is difficult and/or dangerous for them to live in habitats where communication is impaired.

Unfortunately, it is not always easy to disentangle the effects of noise, per se, and all the other things that go with it--physical disturbance, habitat reconstruction, and chemical pollutants, to name a few. However, clever selection of a study area can allow researchers to sidestep this problem and focus solely on the impact of noise on avian communities. Researchers from the University of Colorado and Fort Lewis College have done just this, establishing a research site in the Rattlesnake Canyon Habitat Management Area in the San Juan Basin of New Mexico. This area is peppered with gas wells, which are often coupled with noisy compressors. Each gas well is located in a similar-sized clearing surrounded by similar types of vegetation; the only difference between individual sites is whether or not a compressor is installed and generating noise. In addition, the compressors can be temporarily shut off during bird surveys, ensuring that the noise does not prevent the researchers from hearing species of interest. Thus, any variations in bird behavior or avian community structure between areas can be detected and attributed directly to the presence of noise. 
The collaborators have already published some exciting results looking at the effects of noise on particular species, but in their latest paper they have taken a broader view and investigated whether bird assemblages vary between quiet and noisy wells, and, further, whether this variation can be attributed to the birds' song parameters. To do this, the researchers counted how many individuals and species were present at each site, searched for active nests, and collected recordings of vocalizations in order to evaluate several song/call attributes--including several measures of song frequency. Additionally, they classified each of the 30 focal species as "urban-tolerant" or "non-urban" according to standards developed in a previous study. Ultimately, these data allowed the researchers to examine whether song characteristics and urban tolerance impacted both nesting and abundance responses to noise. 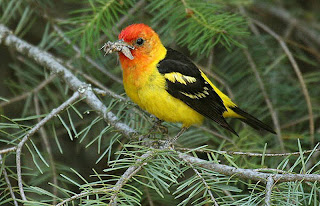 (Western tanager, Piranga ludoviciana. This species has a lower-pitched song, and therefore responded negatively to the presence of noisy compressors.)


Of all the song parameters measured, only those related to frequency (minimum/maximum frequency, and frequency with the greatest amplitude, both across the whole song and within the lowest note) strongly predicted whether birds had settled near the noisy well pads and begun nesting there. Species with lower-frequency vocalizations (<2.0 kHz; overlapping most with the compressor noise) responded negatively to noise; those with higher -frequency vocalizations (primarily >3.0 kHz; above the compressor noise) responded neutrally. Much to the surprise of the researchers, there was also a group of species that responded positively to the presence of noise. These animals, which also vocalized at higher frequencies, may have been enjoying the benefits of living in an environment where competitors and/or predators were chased off by noise. 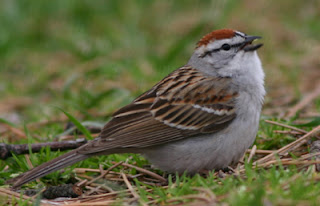 (Chipping sparrow, Spizella passerina. Thanks to its high-pitched song, this bird responds neutrally to anthropogenic noise.)

Because body size has often been linked to vocal parameters, the researchers also investigated whether they could find a relationship between body mass and the song/call characteristics of the birds in their study. Although non-frequency attributes (song length and number of notes) were not related to size, frequency characteristics were. Specifically, larger birds had lower frequency signals, while smaller birds had higher-frequency signals. This suggests that larger birds may, in general, be more susceptible to human noise pollution, since these are the species whose signals most overlap with anthropogenic sounds.


This study is the first to provide strong evidence for a causal relationship between vocal frequency and sensitivity to noise: The birds that lived near compressors were those whose signals did not greatly overlap with the noise these structures produced. However, the authors are quick to point out that birds may not thrive in an environment just because they are tolerant of the noise there; several of the negative nesting responses were even stronger than the negative abundance responses. This indicates that it may be difficult to procure and keep mates in these noisy areas, potentially because the birds cannot hear each other well.

The majority of species in this study responded negatively to noise--including those classified as "urban-tolerant." This suggests that urban birds are not immune to noise pollution, but, rather, are tolerant of it. Urban areas may offer other benefits, such as reductions in predators and competitors, or supplemental food sources, that make such tolerance worthwhile. Overall, however, the current study suggests that noise by itself acts as a "filter" for avian communities, weeding out those species that do not vocalize at noise-avoiding frequencies. Additional, longer-term studies will be needed to determine whether the species that remain benefit in the long run, or whether their tolerance comes at the cost of reproductive success.