As more and more studies find that human disturbance impacts some species more than others, ecologists are shifting their focus to the next logical research question: What is the consequence of this selective disruption of wildlife communities? By interacting with other species and with the habitat in general, many species have significant impacts on their environments; if their numbers are reduced, or if they are eradicated altogether, there could be widespread and/or long-term effects on the ecosystem.

This possibility was recently explored by collaborators from James Cook University and King Abdullah University of Science and Technology, who performed a large-scale study of parrotfish abundance, diversity, and ecological impacts at coral reefs in the Indian and Pacific Oceans. Parrotfishes are so named because of their parrot-like beaks, which they use to scrape algae off coral surfaces. This unique grazing mechanism often grinds off pieces of the corals themselves, in a process known as "bioerosion." One species of parrotfish even eats corals directly. While feeding, the fish ingest sediments that have collected on the reef, which they then spit out elsewhere. Cumulatively, these four activities--grazing, bioerosion, predation, and sediment removal--can have noticeable impacts on coral reef biodiversity and habitat structure. Different parrotfish species perform these ecosystem services at different levels and rates, and human activities (hunting, in particular) target some parrotfish species more than others. Thus, it seemed likely that anthropogenic disturbance might have ecosystem-level impacts by altering the balance of parrotfish species at coral reefs.


To investigate this possibility, the researchers collected data from 18 reefs, from Mauritius to Tahiti, across a disturbance gradient. Just over half the reefs continue to host local fishermen, while 2 have been closed to fishing for 18 years, and another 4 are partially protected. At each site, the researchers documented quantities and sizes of different species of parrotfishes. Since each species acts in predictable ways, in terms of which ecosystem services it performs and at what rate, the census data could be used to calculate the total amount of grazing, bioerosion, predation, and sediment removal performed at each reef. These values were related to 3 indices of human disturbance: population densities on the nearest adjacent landmass, regional per capita incomes, and extent of environmental management. In order to control for the possibility that some regions (e.g., near Tahiti) might naturally have different parrotfish populations than other regions (e.g., near Mauritius), the scientists also documented regional variations in biodiversity and richness; by included these variables in their analyses, the researchers were able to make comparisons of sites across the entire geographic range studied here.

The most heavily fished reefs had much lower numbers of large (>25 cm) parrotfishes than reefs with little or no fishing (3.6% vs. 43-67% of fish). The disparity between sites was even more obvious when the researchers considered biomass, rather than commonness: The most lightly fished reefs had ~50 times the biomass of large parrotfishes than that found at the more heavily fished reefs. Some parrotfish groups were particularly scarce at these highly fished sites; members of the genus Bolbometopon, as well as small species in the genus Chlorurus, were especially rare. However, some species were less affected by humans. Members of the Scarus and Hipposcarus genera were neutrally impacted by anthropogenic activities, while smaller species in the genus Chlorurus actually showed positive trends in areas where fishing was heaviest.


At reefs where fishing was permitted, even small human population densities (16 people per square kilometer) on the nearest landmass were associated with nearly complete disappearance of large-parrotfish-related functional roles--predominantly bioerosion and coral predation--at the reefs. However, where heavy fishing has depleted larger species, smaller parrotfish appear to be doing quite well. When they feed, these animals simultaneously remove turf algae and the sediments they contain; thus, grazing and sediment removal services are generally intact even at the most disturbed sites. These activities, unlike bioerosion and coral predation, varied quite a bit even among sites that had similar human densities. This suggests that non-anthropogenic factors, such as local fluctuations in richness, are a more important predictor of the abundances and activities of the parrotfish that perform these services.

This is not the first study to document declines of large individuals in heavily fished areas. However, this is one of the first studies to demonstrate that this pattern can be seen not just within species, but also among them and, further, that this has significant effects on ecosystem processes. The ability of parrotfishes to perform bioerosion, coral predation, grazing, and sediment removal services depends not only on the abundances of particular species, but also on their morphologies--in particular, body and jaw size, which influence feeding biomechanics. Smaller fish are physically incapable of filling the gaps left when larger fish are wiped out, and this could ultimately lead to a reshaping of the local coral reef habitat, as algae and sediment accumulate, and formerly-predated species of corals begin to increase in number. 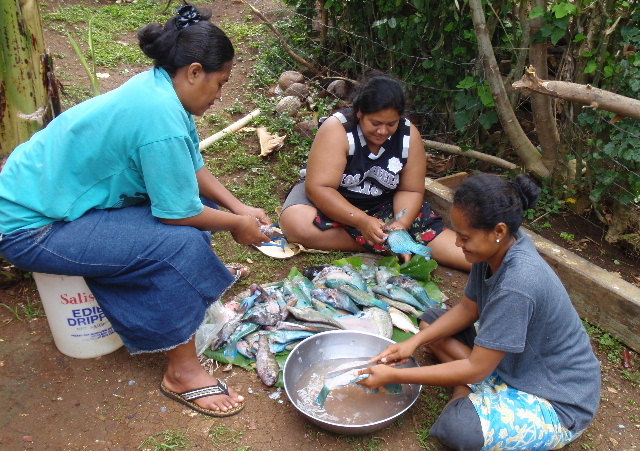 
During the study, the researchers also interviewed local fishermen, with a particular focus on those who have been active for several decades. Time and again, fishermen pointed to the 1960's and 1970's as a time when noticeable parrotfish declines occurred. This is the same period over which new fishing technology--goggles, masks, rubber-powered spearguns, underwater torches, and SCUBA equipment--became available for widespread use. Interestingly, although human population density--a proxy for how many people are likely to be fishing at a given reef--was the dominant anthropogenic factor influencing parrotfish abundances, the other two variables are likely also important: Intact ecosystem processes were only recorded when low population density was coupled with high income and more habitat protection.

The results of the study suggest that protecting or encouraging the growth of parrotfish populations might improve the long-term health of coral reef ecosystems. In areas where the largest species are particularly scarce, corals may be more vulnerable to "environmental stochasticity"--unpredictable events such as cyclones or bleaching. Another worry is algal blooms. Smaller parrotfish are physically unable to consume mature stands of macroalgae, which means that reefs without larger species may be particularly susceptible to algal invasions. These are not concerns that apply only to the 18 reefs investigated in the current study. The authors believe that the ecosystem dynamics recorded here probably reflect relationships among many species and species groups in a diverse array of environments. In order to investigate whether this is the case, additional researchers in a variety of habitats will need to shift their focus, measuring not just how anthropogenic activities may influence the numbers and types of species present, but also how this alters the ecosystem services that are performed in these areas.

Thanks to the following websites for providing the images used in this post:
http://en.wikipedia.org/wiki/File:Princess-parrotfish.png
http://www.frankswebspace.org.uk/marine/redList2007.htm
http://www.bellavia.ca/2010/Oct.html
Posted by Caitlin Kight at 02:05