The latest issue of Conservation Biology marks the journal's 25th anniversary with a series of essays on the future of the field. One of these is a thought-provoking piece by Jon Waterhouse, the Executive Director of the Yukon River Inter-Tribal Watershed Council, and leader of a canoe trek called The Healing Journey. In both those capacities, and in his current essay, Waterhouse emphasizes the importance of nature--not only because of its ability to provide for our bodies, but also because of the contributions it makes to our hearts and minds.


Waterhouse is a Native American of S'Kallam, Chippewa, and Cree descent. During his childhood, he says, "at times the Native and Western messages [he] received regarding values conflicted with one another." As an adult, however, Waterhouse embraces not only his own heritage but also those of many cultures around the world--the diversity of which emphasizes how humans "are one race of many colors." During a lifetime of encounters with people around the globe, Waterhouse has developed the belief that it is human nature to feel a connectedness with, and respect for, the earth. This, he says, is why conservation biology is "the first subject"--a discipline studied by our earliest forbears. These ancient humans developed their techniques the hard way, through trial and error: Those who used too many resources were forced to relocate or go extinct, while those who were more careful and cautious managed to preserve a healthy, self-sustaining environment that continued to provide adequate food, shelter, and water. Although many contemporary human populations live quite different lifestyles than those of their ancestors, there are isolated groups that have, to their benefit, preserved the ways of their ancestors. One example is the "First Salmon" ceremony of the Pacific Northwest Native American tribes; only one fish is taken during the first run, leaving the remaining adults to successfully spawn and perpetuate the species. This and similar examples offer glimpses of how sensitivity to "the rules of nature" allow humans to protect vital resources even while using them. (A First Salmon Ceremony, performed by members of the Lummi Nation. They are one of several Native American tribes actively involved in environmental work in the United States.)

By no means is Waterhouse's message one that describes native peoples as "noble savages." He lists several traditional groups (e.g., the Mayans, the Anasazi, the Rapa Nui) that appear to have mismanaged their resources so horribly that they eventually died out as a result; he also writes that many indigenous people have "not always [been] effective or diligent in their application of conservation." In his opinion, however, they at least "understood the grave consequences of failure"--an ability gained by living in such close proximity with natural processes, where there were few if any buffers available to protect them when miscalculations were made. Perhaps one of the biggest differences between traditional cultures and the majority of human populations today is a lack of connectedness and awareness.

As much as Waterhouse advocates the power of informed, careful, and purposeful action, he also highlights the conservation achievements that have occurred by accident. Around Chernobyl, for instance, the dearth of humans has allowed wildlife to flourish even in the presence of radioactive contamination; the Demilitarized Zone between North and South Korea is now a haven for several endangered bird species, such as the red-crowned (Grus japonensis) and white-naped (Grus vipio) cranes; and, in the Death Zone area between the former East and West Germany, the European dark bee (Apis mellifera mellifera) is flourishing even as bee populations across the rest of Europe plummet. These examples are not provided in order to advocate the view that we humans should just vanish and leave the natural world to fix itself, but instead to promote the idea that if accidental conservation can have such big impacts, well-planned efforts could have truly magnificent outcomes. 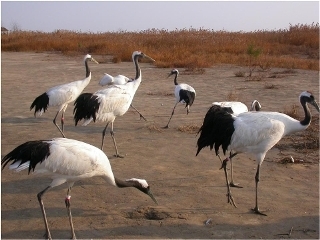 (Red-crowned cranes, Grus japonensis; these overwinter on the Korean Peninsula, where they are found predominantly in the Demilitarized Zone, or DMZ)


But how, precisely, to achieve these? One of Waterhouse's strongest and most poignant messages is the need to increase contact between humans and nature. He describes in painful detail how easy it is to go from one climate-controlled location to the next without once breathing fresh air. This, of course, is one of the greatest differences between native people and modern humans--our separation from both species and processes in the habitats around us. Not only does this cause us to be out of touch with the way things work in the wild, but it also may make it difficult to take responsibility for the situation on the ground. "Part of our challenge," Waterhouse writes, "is finding a way to make nature and science easily understandable and appealing to common people," and advocating conservation biology as a discipline that "can make sense of our place in the natural world" and remind humans how to live in balance with nature.

He particularly advocates targeting children by collaborating with educators--and by doing so early in the education process; creating a "highly engaging and successful program of massive outreach" to inform, excite, and involve people in nature; and to bring conservation biology closer to the front of the corporate consciousness, such that better contingency plans are made from the beginning, rather than in a rush after mistakes have already been made. As is clear from this last suggestion, Waterhouse understands that humans will inevitably rely on nature for resources, just as we always have; conservation biology shouldn't focus on weaning us off these products, but teaching us how to use (and reuse) them more intelligently and with a less negative impact on nature. Finally, Waterhouse also advocates the creation of a "Conservation Biology Council." This would be funded by donations from ongoing conservation projects, and would focus on marketing, branding, outreach, and curriculum development efforts; the ultimate goal would be increasing community awareness, participation, and interest.

(The amazing moai sculptures on Easter Island were made by the Rapa Nui people, the decimation of whose culture stemmed, at least in part, from environmental troubles associated with overuse of the local resources.)

By changing attitudes, perhaps this type of integrative conservation--aimed not only at the species and habitats in need, but also at the people who put them there--could bring us back to a more traditional way of life in which we better understand the delicate balance between taking and giving (or, at the very least, leaving alone). As a first step, Waterhouse suggests setting aside an hour to go outdoors and "just be." This would start us off on a path towards reconnecting and finding balance; it is also, as Waterhouse says, "great therapy for your brain and your bones."

Thanks to the following websites for providing the images used in this post:
http://www.yritwc.org/About_Us/Staff.aspx
http://www.nmai.si.edu/environment/lummi/Future.aspx
http://www.eco-generation.org/activities/news/view.html?boardno=47&cat1=&cat2=&thread=990&no=990&page=48&search=&keyword=
http://whc.unesco.org/en/list/715
Posted by Caitlin Kight at 04:03