Do urban habitats act as refuges from predators?

There have been many theories proposed to explain why some species do so well in human-disturbed areas. One of these is the "predator refuge hypothesis," which states that urban species thrive because they are released from predation pressures that they would ordinarily face in the wild. This may occur as a result of fewer predators, a different mixture of "strong" predators and those who only occasionally prey on particular species, or a shift in the diets of predators (which, for instance, might begin to prefer easily accessible human food left in dumpsters).

A recent study on northern mockingbirds (Mimus polyglottos) has utilized video cameras in an attempt to validate the predator refuge hypothesis and uncover the mechanisms that might drive it. Mockingbirds are considered to be "urban adaptors"--or, to use the new phrase suggested in the current study, "urban-positive." Previous work has suggested that nest predation rates are lower for this species in urban areas than at rural sites. Researcher Christine Stracey (from the University of Florida and Florida Museum of Natural History) placed video cameras at mockingbird nests across an urban-rural gradient in order to catch predators red-handed and evaluate which species pose the greatest threats to mockingbird breeding success. Further, she assessed whether abundances of these predators varied at urban and rural sites.These data allowed her to assess whether urban mockingbirds were, indeed, at lower risk of predation and, if so, why.

Stracey's study was conducted in and around Gainesville, Florida, where she focused on mockingbirds nesting in 2 parking lots, 3 residential neighborhoods, 2 pastures, and 1 wildlife refuge. After locating active nests, Stracey visited them every 4 days to check whether or not depredation had occurred. This allowed her to calculate survival rates reflecting how likely it was for the nests to escape predation. Over the 3 years of the study, Stracey also placed cameras at a total of 144 nests and successfully recorded 58 predation events. By watching video of the predators in action, Stracey could identify which species were the most common culprits.


When calculating nest survival rates, Stracey investigated the influence of habitat type, nest stage, and date. Interestingly, survival was associated with different factors during each of the 3 years of the study. In 2007, survival was highest in both the laying and nestling stage at later dates in the season; in 2008, eggs survived at a higher rate than nestlings, and survival at both nestling and laying stages decreased throughout the season; in 2009, habitat type was very important, with nests in parking lots surviving better than those in other types of site. Clearly, mockingbird breeding success is determined by a complex interplay of many environmental variables that likely impact both the mockingbirds and the predators, as well as interactions between these two groups of species. However, there was less inter-year variation in urban areas, which may indicate that urban environments provide a constant supply of resources, while non-urban areas experience natural fluctuations from year to year. This flux (or lack thereof) could drive predators to be more or less interested in mockingbird nests as a source of food. (A Cooper's hawk, Accipiter cooperii. This individual is sitting on a bird feeder--a common activity of small urban hawks, who often treat backyards like buffets.)


The results from the video analysis were a bit more straightforward. Eight different species or species groups were observed preying on active mockingbird nests: domestic cats (Felis cauts), American crows (Corvus brachyrhynchos), swallow-tailed kites (Elanoides forficatus), snakes, Cooper's hawks (Accipiter cooperii), flying squirrels, Virginia opossums (Didelphis virginiana), and raccoons (Procyon lotor). Urban mockingbirds could expect to face similar foes regardless of which residential area they settled in, and non-urban mockingbirds could expect the same predators whether they settled in a pasture or a wildlife reserve. However, there was a significant difference between the urban and non-urban sites. Specifically, domestic cats (Felis catus) were responsible for >70% (17/24) of predation events in urban areas, whereas Cooper's hawks (Accipiter cooperii) did the most damage in non-urban areas (45%, or 15/33 predation events).

Although urban mockingbirds were able to take refuge from particular predators--especially Cooper's Hawks--they were by no means living in a safe urban paradise. The most successful mockingbird predators--cats--were present only in urban areas. On the other hand, the predators that were found only in rural areas (including flying squirrels, raccoons, and opossums) were much less of a threat. Stracey feels that, "on a superficial level," her results indicate some prey switching in urban predators. For instance, she expected to find predation by common urban species such as fish crows (Corvus ossifragus), boat-tailed grackles (Quiscalus major), and common grackles, (Quiscalus quiscula), as well as by the deadly rural predator, the Cooper's hawk. However, in urban locations, these birds may be "distracted" away from mockingbirds by other sources of food.

(A northern mockingbird nest, hidden amongst the branches of a bush.)


It is more difficult to determine what the data have to say about the possibility of "incidental predation," when predators eat mockingbird nests that they happen to encounter while searching for other, preferred, food items. In the residential areas, several cats supplemented their diets with mockingbird chicks even though they were receiving food from humans; on the other hand, there was no evidence that predators had actually been attracted to mockingbird breeding areas by the presence of alternate food. Clearly, more information is needed about the diets of potential mockingbird predators, both within urban and non-urban areas individually, and across the entire rural-urban gradient. Though it may be time-consuming, a longitudinal analysis of what the predators are eating, how much they consume, and where they find it will be useful in understanding the specific role of mockingbird-related foods in their diets.

Another interesting follow-up study might focus on nest defense behaviors. Mockingbirds are known to be fiercely aggressive towards nearly all species that trespass too close to their nests. Here, the two strongest predators were those that were most difficult to deter by mobbing--and, in fact, posed threats not only to chicks but also to the territorial adults. For mockingbirds and other species, the effect of urban predators may be mitigated by the strength of the adults' nest defense display. In order to study this in greater detail, it will be important to focus on species of a variety of sizes and "boldnesses," as well as investigating those that utilize different styles and locations of nest (which may be more or less easily discovered by predators). 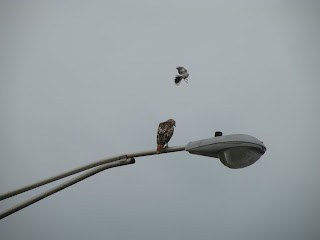 Despite the new questions raised by this study, it does provide pretty definitive proof of one thing: the deadliness of domestic cats. Because the majority of feline predation events occurred at night, Stracey recommends that cat owners keep their pets indoors overnight in order to minimize predation of wild birds; although this might be useful year-round, she places particular emphasis on the breeding season, when vulnerable eggs and chicks are abundant.

Thanks to the following websites for providing the images used in this post:
http://www.dcnr.state.al.us/watchable-wildlife/what/birds/tmt/nm.cfm
http://en.wikipedia.org/wiki/Cooper%27s_Hawk
http://sites.google.com/site/writersmeetup/home/stories/byebyebirdiebyjuliakauder
http://capitalcitybirding.blogspot.com/2011/08/mob-mentality.html
Posted by Caitlin Kight at 04:12