Ninety-nine blog posts ago, Anthrophysis first came into being. It was an idea I'd had for a while and then finally put into reality while participating in the Society for Experimental Biology's Science Communication Workshop. I had just about decided to forgo a special post to mark this momentous occasion when I received an e-mail this evening from Phil Mitchell, founder of Larkwire--an Internet-based app for learning birdsong. If you browse through many blogs/websites, then you may know that it's common for companies to reach out to writers for help with product marketing. Some people make a living based on these relationships, or at least get lots of cool stuff to try out, on the off chance that they might like it enough to make a pubic recommendation. I never anticipated that I would be at the receiving end of such an offer, but I have to admit that I am flattered to have popped up on somebody's radar.

Product placement is not really my thing, but there I was, at the end of a long day, tired of reading and thinking, and I thought...I'll just go take a peek. (If you are worrying that this is about to turn into a product review, never fear; it doesn't). In the past, I've had several computerized databases of North American bird song, including a couple that allowed me to play identification games. I've always been a better birder-by-ear than birder-by-eye, so it's not so hard to tempt me into a birdsong challenge, just so I can see if my skills are still intact.


When I logged in to Larkwire site, the first birdsong I was played was a common yellowthroat (Geothlypis trichas), delivering its familiar "wichity-wichity-wichity" song. I learned that song--like many that I still have memorized today--on Jefferson Proving Grounds, just outside of Madison, Indiana, during my first field job. Hearing that song tonight took me right back there as though it was just last week. I worked at the Proving Grounds as a bird bander--or ringer, as they say here in the UK--for the Monitoring Avian Productivity and Survivorship (MAPS) program. Until that summer, I had always loved birds, but from afar. From then on, I knew them intimately, having handled them day in and day out for months. Nothing makes a wild animal a concrete reality more than holding it in your bare hands, feeling its warmth and its heartbeat, breathing in its smell, looking it in the eyes and seeing it stare right back at you. My memories of that summer are indelible. 
No one ever told me that once I familiarized myself with the songs of the bird species around me, I could never un-learn that knowledge--not that I wanted to. Still, it was disconcerting to find that, from the moment I knew individual birds by their distinct vocalizations, I could not not hear them; when their voices fill the air, it is the same to me as having a family member of friend standing outside my window repeating my name over and over. Because songs imprint so strongly, I often remember places not just by mental photographs but also by associations with the birds I heard vocalizing there. "Home" for me is a place where ruby-throated hummingbirds (Archilochus colubris) buzz and chirp; it's a place awash in the rambling carol of the American robin (Turdus migratorius) and the cheater cheater cheater of the northern cardinal (Cardinalis cardinalis)--the first birdsongs I ever learned. My favorite hiking spot is the place where my heart literally skipped a beat when I heard the intricate, enchanting double-fluted song of the wood thrush (Hylocichla mustelina) for the first time. 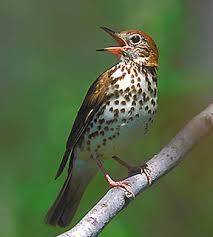 
I could go on and on praising the songs of different species and describing their meaning to me, but I think it would probably have very little impact on most readers. There will be some minority of you who are also bird-lovers, and maybe even birdsong-lovers, and you may understand my enthusiasm. You may even share that enthusiasm for particular species, though in my experience different birders vary quite widely with respect to which species they feel a particular bond with. The majority of readers, though, are probably like the multitude of people that I see each day, passing right by wild birds as though the animals aren't even there. I find it amazing that it is possible for such a thing to happen, and yet, unless a gull comes down and steals food right out of their hands, some people just don't even register the presence of birds, or any other wildlife, for that matter.

I do not say that because I feel superior, but because I find it shocking, and sad. People who do not, or cannot, see nature are missing out on one of the most fundamentally wonderful experiences that life has to offer to a human being. I say fundamental because I think it is something rooted in our psyches. The earliest pieces of art produced by our ancient ancestors were images of animals, after all; not just the animals that were important as a source of food or danger, but also those that just happened to live near human encampments and caught the eye of someone who was skilled with ochre and brave enough to wander into a dark cave to use its walls as a blank canvas. Once you see and know species, you also see and know relationships and processes, and all the sudden the world is transformed into a vast web of interconnectedness in which we humans are only one of many, many components. 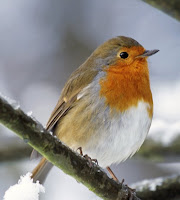 
But how does all of this relate to Larkwire? Well, I learned two things while sampling the program. First, I have grown abysmally bad at identifying tricky North American species now that I've lived in the UK for awhile; how depressing, and what a blow to my ego. Second, and more importantly, the mere sound of some of these birds is enough to actually bring tears to my eyes. After all of these months abroad, hearing their voices is like being reunited with old friends and family. It is a reminder of how powerfully we associate particular environmental characteristics with the idea of home--a place that is not just where we live now, but where we feel most connected with the habitat around us. No matter how much I may love the little European robin (Erithacus rubecula) that sings outside my Falmouth window every morning, rain or shine, it is the sound of the Carolina wren (Thryothorus ludovicianus) that raises a lump in my throat by reminding me of summers at my grandparents' house in the country. Of course, there is no need to be phylogenetically exclusive; I could also wax eloquently about the smell of Amur honeysuckle (Lonicera maackii; an invasive, I admit), the rhythmic calls of tree frogs, or the sight of sassafras trees (Sassafras albidum).

(Sassafras, Sassafras albidum. When I was a young girl, my father took me on a guided nature walk during which I learned a Native American tale explaining why this tree has leaves of three different shapes. During that walk, I also learned how to identify the ovenbird, Seiurus aurocapilla, by its voice alone. If there is any one event that I can attribute to my interest in the natural world, it is that outing.)


It may seem a bit self-serving for a commercial product like Larkwire to sell itself as benefitting conservation, but it's actually a fair statement--beyond even the fact that 10% of the proceeds from each sale go to "front-line" conservation efforts. When something increases your awareness, it often increases your feeling of connectedness, and when you feel connected, you feel inspired to preserve. At least, I hope that's the case, because that's certainly the idea behind this blog. I've never seen or felt much of a gap between humans and nature, but I know that many people do. Hopefully the research profiled here shows how inextricably linked we all are with each other and with nature around us. Some of the posts here are more positive than others--particularly those that show how humans and wildlife can peacefully co-exist in many surprising ways. Other posts are a bit more depressing, since they highlight how thoughtlessly destructive we humans can be. Overall, I hope that they are inspiring and edifying. If just one person learns just one thing each day, then I suppose I am successful.


If you're waiting for me to give a thumbs-up or a thumbs-down to Larkwire, then I'm afraid you are out of luck; like I said earlier, product placement is not really my thing, and this isn't a commercial. Still, I do have to thank Phil Mitchell and his game for allowing me to hear the sounds of my "motherland," and to be struck with sudden inspiration for tonight's post; to express my gratitude, I've decided to mention the product and its creator by name. I also have to thank all of you who come back here each day to see what new finding has been reported in the academic literature. Heaven knows there are enough blogs on the Internet to keep you entertained for a lifetime, so I appreciate that you visit mine.


---
Thanks to the following websites for providing the images used in this post: