We humans may be tempted to think that one farm is like any other, but at least one species of bird--the great bustard, Otis tarda--shows clear preferences for some agricultural areas over others. Specifically, overwintering female bustards seem to prefer traditional farmland habitat characterized by a mosaic of vineyards and olive groves, low human population densities, and minimal anthropogenic infrastructure. This preference differs from that shown during the breeding season, indicating that conservation plans drafted to protect this species--which is classified as "vulnerable" at national, European, and global levels--need to be more comprehensive than previously realized.

These results were the product of a study performed by four collaborators from the Museo Nacional de Ciencias Naturales and the Universidad Complutense (both in Madrid). Spain, with more great bustards than any other country, contains approximately 60% of the global population of these birds. However, anthropogenic intensification in the Iberian Peninsula is a potential threat to this vulnerable species. Major worries include the construction of additional infrastructure, creation of agricultural monocultures, and replacement of traditional vineyards. Bustards are generally quite happy to live near humans during the breeding season, but, prior to the current study, little was known about their habitat preferences during the winter. Seasonal variation in habitat use might mean that current conservation plans do not adequately protect the species.

In order to evaluate great bustard habitat use, the researchers placed radio-transmitter backpacks on 68 females and tracked them for at least two years apiece. Females were sighted multiple times per season and GPS coordinates were collected for all locations where the females were present. These were used to determine each bird's breeding and wintering areas. Habitat surveys were then performed in order to characterize each area's topography (altitude, slope, surface undulation), climate (temperature, rainfall, amount of sunshine), land-use type (type and amount of farmland, pastureland, and/or vegetation), and human influence (distance to nearest road and urban area, road length, area of urban cover, human population density).

(A mosaic of Spanish vineyards and woodland)

Most females (77%) showed high fidelity to their wintering sites from one year to the next. Among those who migrated from a breeding site in one area to a wintering site somewhere else, 80% wound up in the same location: Mesa de Ocaña in North Toledo. Overwhelmingly, the birds chose wintering sites that were flatter, at higher altitudes, warmer, and less anthropogenically disturbed than their breeding sites. This final characteristic resulted from the sites' being farther from urban areas, containing lower human population densities and less human infrastructure, and possessing more mosaic (e.g., traditional) farmland.

The researchers also performed a wintering-ground-only analysis in which they compared habitat characteristics of settled areas to those of nearby unused areas. Although there were 9 traits that were significantly different between these two types of site, the most important predictors of bustard habitat choice were amount of vineyard and level of substrate diversity. Specifically, the birds preferred areas with more vineyard habitat and more uniform substrate--the latter of which was generally caused by a lack of trees. 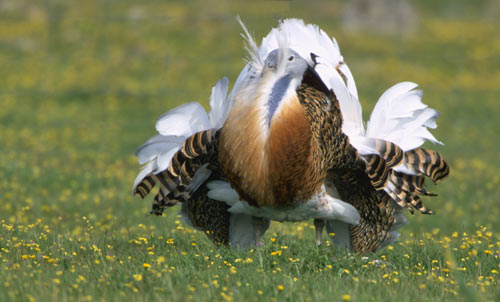 One of the most exciting results of the study was the identification of the North Toledo wintering site; this is not only the most important great bustard wintering site in Spain, but, with flock sizes exceeding 200 birds and with densities of 6.3 birds per square kilometer, the most important overwintering site for this species in the world. However, the birds' clear preference for a less disturbed wintering area is a bit worrying given the generally high rates of anthropogenic habitat alteration in the region.

Female bustards appeared particularly enamored of traditional vineyard areas, where vines are shorter and more dispersed, and where there are fewer humans nearby. This type of agricultural area is increasingly being replaced with modern vineyards characterized by wire-supported vines where the plants are higher and more human workers are required to regulate irrigation equipment. The researchers report that nearly 44,000 hectares of traditional vineyards in the region have already been converted, with plans to convert another 100,000 hectares in the near future. This could reduce habitat not only for great bustards, but also for other endangered species such as the little bustard (Tetrax tetrax), black-bellied sandgrouse (Pterocles orientalis), and pin-tailed sandgrouse (Pterocles alchata). 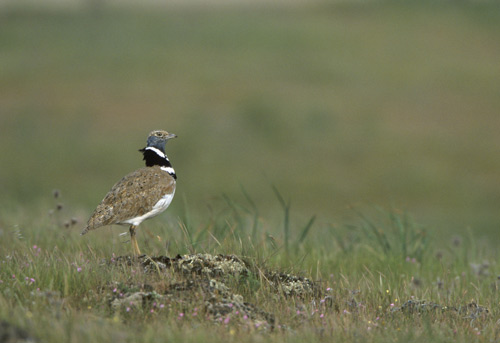 Although it is heartening to see wildlife happily utilizing certain human-altered habitats, the authors of the study are worried about the efficacy of the Special Protection Areas (SPAs) created to provide protected habitat for endangered species like the great bustard. Specifically, the researchers state that regional authorities associated with the SPAs have actively supported agricultural transformation and infrastructure construction--two habitat modifications that are particularly likely to make sites less bustard-friendly. Thus, they hope that their new data on the birds' winter habitat preferences can be used to design more appropriate conservation and management plans that protect the birds and their homes year-round.