Why did the black bear cross the road?

Worldwide, bears have been eliminated from more than half of their historic ranges and, even now, many species continue to face human persecution. In Europe, Africa, and--especially--the United States, wildlife managers have attempted to increase and improve potential bear habitat by making wilderness areas more difficult for humans to access. One method of accomplishing this is road closures, which can be achieved via the installation of gates or barriers, complete removal of tarmac, or even recontouring--elimination of the roadbed and reinstallation of "natural," pre-road conditions.

Although a few studies have investigated the impacts of road closure--including determining whether gates or barriers are more effective--none has researched the effectiveness of road removal and recontouring, or compared it to the other methods available. In order to better understand the impacts of this technique, researchers from Wildlands CPR and the University of Montana used remotely-triggered cameras to monitor road use among black bears (Ursus americanus) living in the Clearwater National Forest in north-central Idaho's Bitterroot Mountains. The cameras were installed on 18 pairs of open and closed (6 gated, 5 barriered, and 7 recontoured) roads, where they took images during the 2006-2009 bear hunting seasons. The resulting photos were used not only to count how many bears were present on the road, but also when they ventured out--day, dawn/dusk, or night. In the final year of the study, the researchers also performed habitat surveys in order to quantify hiding cover (understory plants such as shrubs and small trees), line-of-sight (the distance over which a bear could be seen by a hunter), and food availability (percent cover of plants identified as black bear food) on the roads. Approximately 4 times as many bears were detected on closed roads as on open roads. In these preferred areas, humans were photographed significantly less, line-of-sight distance was shorter, and food was more common (particularly in the fall). Because open roads were actively used by human vehicles, they did not provide any hiding cover; however, on closed roads, cover made up approximately 2.3% of the habitat. Overall, it appears that closed roads provide decent habitat for black bears, and that bears respond to this by spending more time in these areas.

There were no significant differences in the timing of bear usage of the different types of road, but there were some interesting, and consistent, patterns. During the day, bears were never detected on open roads, but they were observed there at dawn/dusk and at night. These patterns suggest that the animals were actively avoiding anthropogenic areas when humans were more likely to be present. This differs markedly from behaviors on gated and barriered roads, where bears were observed equally often during the day and at night (but never at dawn/dusk). Only on recontoured roads were bears most commonly detected during the day (42% of the time). In other words, of all closed roads, those that had been recontoured appeared to provide the habitat where bears felt safest. 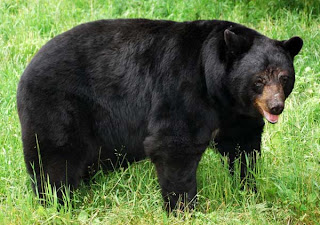 Human detection levels were similarly low across all types of road, but other road characteristics were significantly different. Recontoured roads had the highest number of bear detections (4.6 animals per 100 days vs. 1.6 and 0.5 for barriered and gated roads, respectively). These areas also had approximately twice as much cover of autumn bear foods than the other types of closed roads; this feature is especially important since bears need large quantities of food in the fall, prior to going into hibernation. Barriered and recontoured roads had similar levels of hiding cover; gated roads had none at all. Overall, bear detection was negatively correlated with frequency of human detection and with line-of-sight distance; however, it was positively correlated with fall foods and hiding cover.

The patterns reported here for open and closed/removed roads are similar to those described elsewhere. Cumulatively, these studies indicate that preventing human use of roads can benefit wildlife; in addition to bears, cavity-nesting birds, western toads, and forest carnivores have also been found to respond positively to road closure/removal. However, it appears that even long-term closure may not restore habitats to their original quality; although gates and barriers keep out cars and many pedestrians, the presence of tarmac prevents the growth of vegetation that can be used for shelter and as a source of food. On the whole, recontoured roads were better at providing these habitat services. Unfortunately, this comes at a price--while barriers start at $800 and gates at $1000, recontouring generally costs at least $3,000 and sometimes much more.

In order to convince funding sources to shell out the money required for recontouring efforts, it may be necessary to provide evidence that this technique does not only alter bear behavior, but also has long-term impacts on ursine populations. In other words, researchers will need to show that bear survival rates, reproductive success, and/or longevity are higher in areas where road closures are achieved via recontouring. Additional study efforts will also be needed to determine whether other bear species (such as grizzly bears, Ursus arctos horribilis), or even animals in other taxa, are similarly helped by recontouring efforts. The photographic record from the current study included images of wolves (Canis lupus), mountain lions (Puma concolor), and bobcats (Lynx rufus), suggesting that recontouring, specifically, and road closures, in general, could simultaneously benefit multiple persecuted species in wilderness areas.


Thanks to the following websites for providing the images used in this post:
http://www.flickr.com/photos/wildlandscpr/2899931122/sizes/m/in/photostream/
http://blackbearlearning.blogspot.com/
http://www.discovernw.org/store_clearwater_2CLWA/