American crows learn about dangerous humans--from each other

Researchers have long known that species in the Corvidae family (including crows, ravens, rooks, jackdaws, jays, magpies, treepies, choughs, and nutcrackers) are uncommonly intelligent--not just by avian standards, but also relative to other smart animals such as many primates. The exact nature and extent of that intelligence is being revealed by a steady stream of studies covering a variety of behaviors ranging from communication to tool use to learning. One of the most recent examples of this work was recently published in the Proceedings of the Royal Society B, where scientists from the University of Washington described experiments performed on American crows (Corvus brachyrhynchos) living in Washington state.

The work followed up on previous research showing that individual crows could recognize specific humans and, when those humans had appeared threatening in some way, discriminating against them (in the form of mobbing behaviors and scolding vocalizations). These behaviors were particularly common in crows that had been captured by scientists looking to measure and band them--unsurprising, given that the imprisoned birds would be benefit from recognizing these "dangerous" humans in order to avoid them in the future. However, the researchers noticed that similar anti-predator demonstrations were also performed by crows without direct experience with captors. This suggested that the birds might be learning about potential predators from their flockmates.

In order to investigate this--and, if relevant, document the dynamics of the social learning process--the scientists performed a multi-year study associated with their efforts to capture and band crows at a variety of sites near the University of Washington Campus. During bird capture efforts, researchers wore a mask in order to condition the crows to a specific, dangerous "predator" stimulus. Later, the humans then performed walkthroughs near the capture sites--sometimes wearing the same mask, at other times wearing a "neutral" mask or none at all--in order to observe bird responses to their presence. Because captured crows were individually marked, the scientists knew when they were encountering an "experienced" individual or one that had no first-hand knowledge of the banding process. Walkthroughs were repeated multiple times (after 9, 31, and 38 exposures to trapping efforts) and were mapped, allowing researchers to measure spatial and temporal fluctuations in mobbing and scolding behaviors. 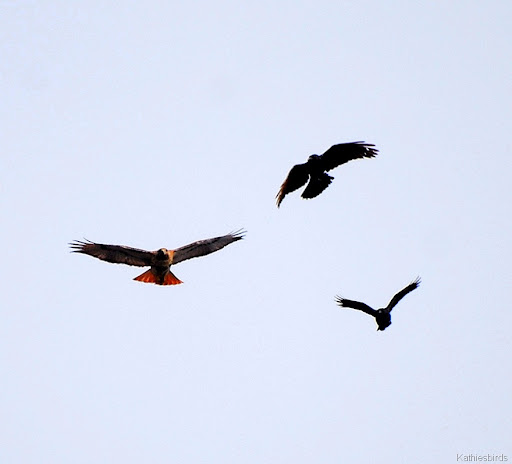 (A crow mob--in this case, of a red-tailed hawk, Buteo jamaicensis)

Over the 5-year study period, more and more crows joined in group mobbing and scolding behaviors during banding efforts. During successive encounters, the researchers noted a linear increase in the proportion of birds that responded to the presence of the mask by scolding birds; the fact that the birds displayed these behaviors in the absence of other mobbing individuals indicated that they had previously learned that the mask signified a potential predator. Before crow trapping efforts began, only 3% of naive birds responded negatively to the dangerous mask; by the end of the study, reactions were observed in 66% of individuals--including some up to three-quarters of a mile from the capture site.


The birds may have learned about the meaning of the predatorial mask via either horizontal or vertical transmission of information--in other words, from contemporaries or from parents, respectively. During further observation efforts, the researchers uncovered evidence for both processes. Lone, unbanded adult birds were more likely to respond negatively to masks during later walkthroughs than early ones; this indicates that, during the intervening periods, they had learned about the implications of the predatorial mask. Likewise, an increasing proportion of unbanded individuals responded negatively to the masks after having observed scolding mobs, again suggesting that the crows had learned from their flockmates that the mask indicated trouble. While those patterns highlight the importance of horizontal transmission, observations of juvenile birds underscore the relevance of vertical transmission: Fledglings were much more likely to scold a masked person when they had previously observed their parents do so. This was true even when adults were absent, indicating that the juveniles were not just copying their parents, but instead had truly learned about the meaning of the mask. The researchers did one final analysis in order to assess the accuracy of social learning. It turns out that birds who learned their lessons the hard way also learned them best: In 91.3% of encounters, captured birds "immediately and consistently" scolded people wearing the predatory mask, but rarely scolded anyone else. On the other hand, "correct" responses to the predatorial mask were only observed 33% of time from birds that had learned from their flockmates. Although this is a much lower response than that observed in experienced individuals, it is still a significantly stronger reaction than the "learners" displayed towards neutral masks, indicating that social learning is better than no learning at all.

The scientists suggest that their results may actually underestimate the importance of the crows' social learning process, since interactions with people probably elicit weaker responses than interactions with "more typical encounters with deadly predators"--which often result in death or injury, and therefore provide additional public information that could reinforce the learning process. The ability of the crows to learn about particular classes of people may be one reason why this species does so well in human-disturbed areas: Individuals can quickly learn how to recognize, and take advantage of, friendly humans (those who provide food, for instance), while avoiding those who are less sympathetic towards crows (and may shoot or trap them); this expertise is then passed on to flockmates and juveniles, thereby increasing the number of birds that can successfully navigate the unpredictable anthropogenic landscape. On a broader scale, the results also suggest that an improved chance of predator evasion is one of the reasons why crows--and even animals in general--evolved the ability to learn from each other.

Thanks to the following websites for providing the images used in this post:
http://herpindiego.com/AmericanCrow.html
http://kathiesbirds.blogspot.com/2011/04/crows-mob-hawk-swf.html
http://www.thefreequark.com/2009/06/the-deceiving-ordinariness-of-blackbirds/