When the global human population recently expanded to 7 billion people, there was renewed discussion of how we will manage to produce all of the items that we directly and indirectly need from agricultural crops--including food for ourselves and our livestock, fibers, fuel, and various tree-based products--while also maintaining healthy ecosystems and making land available for other purposes such as housing and recreation. It may seem like a tall order--especially given the important but unpredictable influence of continued climate change--but a new review paper published in Frontiers in Ecology and the Environment outlines how plant breeders may hold the key(s) to promoting "harmony between agriculture and the environment."

The paper was written by collaborators from several institutions, including The Samuel Roberts Noble Foundation, the University of Illinois, Cornell University, The Land Institute, The US Forest Service, Texas A&M University, the US National Arboretum, New Mexico State University, and the National Institute of Food and Agriculture. The main focus of the review was to emphasize how, throughout agricultural history, plant breeders have continually played an important role in ensuring that crops were available to meet the various and changing needs of growers and consumers. As a society, we may previously have been more interested in maximizing yield and the size of individual plants or plant products, but now our goals have shifted; we are interested in preparing our crops for continued climate change, developing more sustainable practices, finding crops that can grow in "marginal" agricultural areas, and promoting ecosystem services such as erosion prevention and promotion of nutrient recycling. 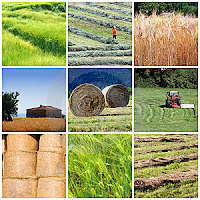 The authors argue that small-scale breeding efforts, led by private and non-profit groups--in particular, education and research institutions--will be key for developing new cultivars of interest. This is because industrial researchers may devote 10 or more years to developing and testing plant cultivars before they are released to growers; thus, they are less effective at generating the sort of "alternative" crops that will be needed to meet new agricultural demands. A focus on small-scale institutes where a variety of knowledge can be shared between junior and senior researchers will ensure that breeders have the fine-tuned biological training that will not only provide them with the ability to create new plant breeds, but also the skills to determine what sorts of characteristics those plants should have in order to target particular environmental problems. Given the diversity of goals that we may wish to accomplish with new cultivars, the authors suggest that there could be diverse opportunities for people from many disciplines to work together; this includes ecologists, conservationists, land planners, economists, geneticists, and immunologists, to name a few. Once the new breeds are developed, the private sector can then play a role in the mass production and dissemination of the final product.

According to the authors, there are several ways in which new cultivars might improve on existing crops. First, they can be bred to have a smaller environmental footprint--for instance, by requiring fewer nutrients (such as phosphorus, which is becoming increasingly globally scarce) and water. Alternatively, it may be possible to create varieties that can be grown under more environmentally-friendly conditions--such as in mixed-species groups that mimic aggregations in natural ecosystems. Second, new cultivars could be designed to better tolerate climate change, which not only may increase the number of "extreme weather" events, but may also change temperatures, levels of precipitation, and host-pathogen relationships. Plants that are inherently more tolerant of flooding, drought, heat, frost, and disease could therefore be better equipped to deal with future environmental changes. Third, current crops do not always provide "essential ecosystem services," or, where they do, may not supply them efficiently. Thus, new breeds of crops might be developed to perform a variety of jobs, such as improving soil health, reducing erosion, preventing runoff, and maintaining biodiversity.

As useful as it may be to alter the crops themselves, the authors state that it may also be important to vary the practices associated with their development and growth. For instance, individuals investigating new cultivars should grow them under "local" environmental conditions (e.g., the conditions that the plant will experience once it reaches its designated target habitat) in order to fully ascertain whether the new breeds are suited for particular purposes. Plants will be impacted by soil conditions, temperatures, and prevalence of diseases, and may therefore react quite differently depending on the environment. It may also be possible to develop cultivars that are particularly well suited for alternative agricultural practices that vary crop rotations, planting densities, and tillage systems--each of which may be used to improve a crop's "relationship" with the environment.

The authors also recommend that breeders focus on developing plants that can be used in anthropogenic settings--urban areas, in particular--and in conservation efforts. Currently, urban areas are dominated by ornamental species that are often non-native; these plants are popular because they do so well in the harsh conditions of human-disturbed habitats. However, these species may have a number of drawbacks, such as a tendency to introduce invasive diseases, an inability to provide desired ecosystem services, and a propensity to use more water and nutrients than native species. Thus, the development of urban-friendly native cultivars could be beneficial on a number of levels. This is also true in conservation settings, where breeding efforts have been vital for creating new cultivars of endemic species, such as chestnuts and elms, that were hard hit by introduced diseases; newly-bred varieties of these plants are now being used in efforts to restore native forests.

All of these environmentally-friendly traits stem from particular genes or suites of genes. In many cases, current agricultural crops no longer contain the genetic variation needed to provide the foundation for new cultivars. Thus, breeders need access to wild-growing individuals from the same species, or to specimens that were previously placed in gene banks. This, the authors emphasize, is one of the many practical reasons why biodiversity must be maintained: With each species or variety that goes extinct, we may lose access to particular characteristics that we need for our future crops. Of course, there is always the possibility of using transgenic techniques, but the authors realize that not all consumers wish to purchase products that have been heavily genetically modified in a laboratory.

Regardless of how the new cultivars come into being, the authors are confident that plant breeding is a "powerful tool" that can place agriculture and natural environmental processes in sync--but only if a broad range of individuals, from breeders to ecologists to urban planners to policy makers, are willing to work together to "make this a reality."

Thanks to the following websites for providing the images used in this post:
http://trendpak.blogspot.com/2011/04/trend-of-agriculture-pakistan.html
http://mariamuir.com/2010/10/24/natures-elements-turned-into-toxic-chemicals/
Posted by Caitlin Kight at 03:05