You may not notice it, but the fluorescent lighting around you is flickering--either at a high frequency (>30 kHz) or a low one (a rate of 100-120 Hz, depending on what country you're in). Although you won't consciously notice either, the latter may cause you to experience some unpleasant side-effects, including eye strain and migraine. Many avian species, which can process visual stimuli at a higher temporal resolution, may be even more susceptible to these and other impacts of low-frequency light, which can cause "repetitive and excessive stimulation of [the] nervous system with each light flash." This could have serious negative consequences for the billions of birds worldwide that are kept on or in farms, zoos, homes, and laboratories.

There have not been many previous studies on the impacts of low-frequency lighting, and those that have been conducted have produced conflicting results. The resulting confusion inspired collaborators from the University of Bristol, Deakin University, and Cardiff University to develop a research project that might finally shed some light--so to speak--on the potential harmful effects of low-frequency fluorescent lighting. They captured 32 wild European starlings (Sturnus vulgaris) and moved the birds into an artificially-lit aviary. After 6 months of acclimation to the captive conditions, the birds underwent a three-week experiment: Half of the animals were exposed to 14 days of high-frequency lighting and then 7 days of low-frequency light, while the other half had the reverse treatment. Because the researchers hypothesized that the low-frequency light would act as a physiological stressor, they investigated avian characteristics that typically fluctuate in response to stress: body weight, behavioral time budgets, and corticosterone and hematocrit levels (the former of which is a stress hormone, and the latter of which indicates the oxygen-carrying capacity of the blood).


Regardless of which experimental treatment they experienced, birds lost weight during the first 7 days of exposure--indicating that any change in circumstances is likely to cause birds some stress. While this was common across all animals, behavioral time budgets were not. Specifically, birds that shifted from low- to high-frequency lighting conditions jumped around more, preened less, and experienced fewer myoclonus events--involuntary muscle spasms in the head. Birds that switched from the high- to low-frequency lighting conditions demonstrated the opposite shift in behavior. Cumulatively, these patterns show that low-frequency lighting, regardless of when it is experienced, is associated with higher rates of myoclonus and preening, and lower levels of activity. The first two behaviors are considered signs of stress and reduced well-being, while the reduced rate of jumping suggests a sort of general malaise. Overall, these results indicate that the starlings were not as comfortable under the low-frequency lighting conditions.

Another interesting behavioral adjustment was related to aggression, which remained at an elevated level throughout the 3-week experiment among birds that experienced the low-frequency lighting first. This suggests not only that the lighting set the birds on edge, but that its negative effects could be felt for an extended period of time--even after the stimulus is removed. Indeed, the researchers reported that increased aggressiveness was observed in some birds up to 6 months after completion of the study. 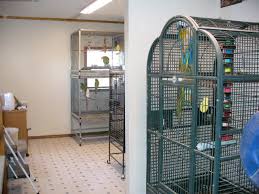 (Example of an indoor aviary with fluorescent lighting)

Although hematocrit levels were not affected by lighting treatment, birds exposed to high-frequency lighting had higher corticosterone levels; this was true regardless of whether the birds experienced high-frequency lighting in the first or second phase of the experiment. While it is sometimes assumed that higher levels of corticosterone indicate higher levels of stress, this is not necessarily true. One way that the birds' bodies can adjust to stress is to decrease basal corticosterone levels, such that more stressed birds actually have lower amounts of this hormone. This is an adaptive response that allows animals to deal with unexpected, and often extended, stressful situations in the wild. Previous studies on starlings have indicated that chronically stressed individuals have lower corticosterone levels, supporting the theory that low-frequency lighting is a stressor for these birds.

Hormones and behaviors are often closely linked, and it is possible that corticosterone changes drove the behavioral fluctuations observed in the light-stressed birds; however, further research will be necessary to confirm this. In general, the relationship between these two types of variable is mediated by a number of factors, including body condition, food availability, season, and social status. This may explain the conflicting results of previous lighting studies, since it is unlikely that all birds--both within and among the studies--were in exactly the same state. There may also be individual variations in responses to stressors such as low-frequency lighting; in the current study, for instance, some birds exhibited up to 60 myoclonus events during a single 20-minute observation period, while others had none at all. The researchers suggest that future experiments should attempt to elucidate the source of this individual variability, both in general and specifically with respect to myoclonus--an important behavior because of its propensity to disrupt or impair other activities.

(Aggressive interaction between wild starlings. Encounters like these were more common among captive birds caged in low-frequency artificial lighting conditions.)


Overall, the study clearly shows that caretakers of captive birds should make sure to use high-frequency lighting in their aviaries/cages; in order to be safe rather than sorry, this is a technique that should be broadly applied to all avian species, not just starlings. Additionally, the work suggests that scientific researchers should not try to compare results of studies performed under different lighting conditions, as low-frequency lighting can impact both physiology and behavior. The authors hope that these new findings will lead to an improvement of both avian welfare and interpretability of scientific data collected in aviary settings.


Thanks to the following websites for providing the images used in this post:
http://joefelso.wordpress.com/2007/07/29/haiku-sonnet-sturnus-vulgaris/
http://www.birdboard.com/forum/f15/breeding-setups-953164.html
http://www.flickr.com/photos/jeanvanholen/4390264612/sizes/m/in/photostream/
Posted by Caitlin Kight at 15:09