Illegal harvesting of natural materials is a global problem, but is especially prominent in areas where poverty-stricken residents rely on these goods as sources of energy or food and as components of handicrafts, tools, and/or buildings. Although local law enforcement agencies may try to restrict harvesting, they often don't arrive at the scene of the crime until the damage has already been done. However, a team of collaborators from Kenya's University of Nairobi and Japan's Yokohama National University and Yokohama City University suggest that a bit of ecological sleuthing can reveal details about poachers' "patterns and preferences"--information that may allow the creation of better management policies that are helpful to both humans and wildlife.

The researchers tested their theory during a study in the Ngong Road Forest Reserve in Nairobi, Kenya. One side of the reserve borders the Kibera slum, where approximately 80% of the 300,000 inhabitants are below the national poverty line. Because they cannot afford to purchase wood, many of the slum residents enter the reserve each day in order to collect "forest products"--mostly kindling and wood for fires, but also raw materials for carving and bark for traditional medicines. Although forest rangers routinely patrol the reserve to discourage poaching, they frequently encounter fresh stumps and branches left by raiders. The scientists hypothesized that an analysis of these stumps could provide information about the poachers' motives and could also help researchers predict the potential ecological outcomes of continued illegal harvesting. In order to perform the analysis, the researchers divided the forest into grid cells in which they could survey both harvested and remaining trees. For each, they identified the species of focal plants, measured their sizes, and noted basic characteristics such as whether they were thorny, exotic or native, and succulent; they also measured distance to the slum, distance to the forest rangers' station, and distance to the forest fence.


Of nearly 15,000 stems censused across all 87 grid cells, approximately 9,000 were living and 6,000 had been cut. Stem densities were as much as 12 times higher in moderately disturbed sites as in highly disturbed areas, indicating that poachers had a significant impact on some sections of the forest. Specifically, the researchers found that stems were more likely to be cut in areas located near the slum and, especially, near the fence border. Smaller stems were especially likely to be targeted, and stems were slightly less likely to be disturbed nearer the ranger stations. Trees were more likely to grow, undisturbed, to larger sizes when they were farther from both the slum and the fence.

The most preferred species were those that grew in dense patches--a trend mainly driven by invasive timber species such as Eucalyptus trees. Poachers seemed to avoid trees with spines, thorns, or prickles; likewise, they were wary of succulent and semi-succulent plants, which were not very useful for either burning or carving. Preferences for species and size were only weakly correlated; while poachers appeared to prefer smaller stems of most species (probably for kindling), they were interested in larger stems for Brachylaena huillensis and Teclea trichocarpa--the former of which is a highly prized carving material.

These "forensic" investigations indicated that anthropogenic influences on wood resources were highly influenced by both accessibility and species identity: Human disturbance was "magnified" near the slum, and was particularly focused on trees that grew in high-density stands that made harvesting easier. There was a definite preference hierarchy, with lower-quality woods being utilized only after other types of wood had been depleted. Because of this lopsided interest in some species over others, growth in the forest was increasingly shifting towards the "spiny shrubbery" end of the vegetation spectrum. This is partly a result of the spread of invasive species such as lantana (Lantana camara) and kei apple (Dovyalis caffra), both of which are protected from poachers by their thorns and are happy to utilize the space left when neighboring trees are harvested. Unfortunately, these ecosystem changes are threatening the long-term safety of rare indigenous species such as Olinia rochetiana--and are likely having an impact on other types of wildlife, that utilize native trees as sources of food and shelter.

The researchers point out that wood harvesting preferences can change quickly as a result of variations in resource availability and socioeconomic circumstances. They suggest that poaching activity could be reduced via the creation of management schemes that "engage" the local community--in this case, the Kibera slum--and increase residents' "role and responsibility" in the conservation plan. The authors say that there should be three main goals to help save the Ngong Road Forest Reserve and other areas like it. The first goal is to reduce harvesting of the near-threatened B. huillensis and to begin regulating the woodcarving market to prevent the demise of this species as a result of its popularity as a source of carving material. The second goal is to remove invasive lantana before it completely chases native vegetation out of the forest. Ideally, residents could find a use for this and other exotic species--for instance, as a material for handcrafted rattan furniture; this would temporarily increase demand for the species and speed up its demise. Finally, the researchers emphasize the need to develop more sustainable techniques of harvesting fuel. This might be accomplished by deliberately planting preferred nonnative tree species in heavily trafficked areas in order to reduce pressure on indigenous vegetation while also giving the slum residents access to the wood products they need. 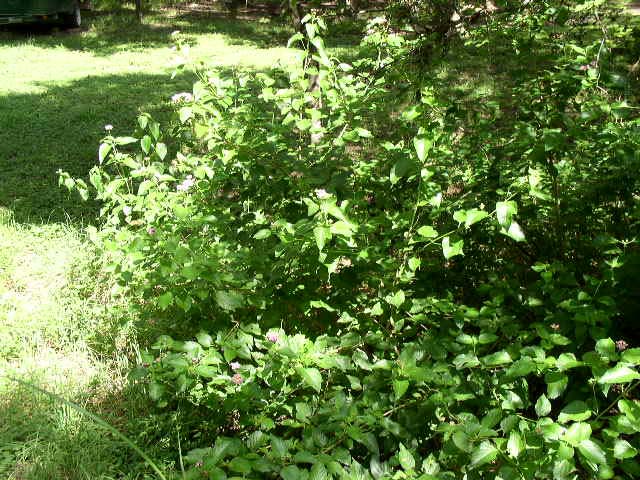 (The invasive lantana, Lantana camara, quickly spreads where native trees have been removed by harvesting)

As useful as this three-pronged approach might be, though, it only targets the outcome of a larger problem, rather than the problem itself: poverty. Thus, the scientists recommend the development of city-wide plans to help the poor, improve urban planning, and make alternative sources of energy available to those who need them.

Thanks to the following websites for providing the images used in this post:
http://www.skyscrapercity.com/showthread.php?t=515152
http://dowser.org/bop-slideshow-komaza-innovations-in-microforestry-and-sustainablity-in-africa/
http://www.sbs.utexas.edu/bio406d/images/pics/vrb/lantana_camara.htm
Posted by Caitlin Kight at 18:16