eBird: a model for other citizen science projects?

Modern technology has helped scientists solve many difficult problems, but occasionally there are some achievements that can only be managed by harnessing the power of the human brain. Animal identification, for instance, is a complex process during which observers consider several characteristics--shape, size, behavior--under different circumstances, ponder which species are likely to be present at that time and place, and then choose the correct match. According to collaborators from the Cornell Lab of Ornithology, writing in a recent issue of the scientific journal PLoS Biology, this is a task that is "beyond the scope of existing artificial intelligence algorithms" and can only be accomplished by human observers. That is why, in 2002, the authors launched eBird, an Internet-based citizen science project that allows birders to report bird sightings and observations. The purpose of the team's recent journal paper was to discuss how eBird can be used as a model for the development of other successful citizen science projects.

The authors are quick to point out that their online program is only one of several that use "humans' puzzle solving abilities" to advance science: others include FoldIt, which helps predict protein structures; Galaxy Zoo, which helps pick galaxies out of celestial images; the ESP game, which labels images; and reCAPTCHA, which provides Internet security while transcribing historical printed documents. All of these are examples of "human computation," a field that "[harnesses] human intelligence to solve computational problems." These citizen science projects have two main purposes: to increase interest in, and support of, scientific efforts by actively engaging the public, and to provide data that are useful--and free of charge--to scientists, researchers, managers, and amateur naturalists.  eBird's developers believe that these goals can be achieved if developers keep 6 main goals in mind: familiarity with the focal community, maximal participation, gentle guidance of participant behavior, data quality, connection to other related datasets, and global expansion.


One of the key characteristics of eBird is that it is relatively simple to learn. When users submit data, they are asked to include information on species seen, date and location of the sighting, and whether they are reporting their entire observation list or just a random sighting. As data submitters become more familiar and comfortable with the eBird format, they can begin to include extra information, such as the age, sex, or behavior of birds--but only if they wish. This ease of use gives eBird broad appeal and increases "initial involvement"; once the program has helped users clear the hurdle of a first visit, there are many other characteristics that increase participation and keep birders returning for more. These include "personal" touches to the program, such as list-keeping features and the ability to compare observations with other users. eBird's developers included these functions after a "lukewarm" response to the program; these characteristics were designed to allow birders to do online what they were already doing, in person, in the field. The program modifications appear to have worked: Recent tallies indicate that over 1.7 million checklists will have been submitted from over 200 countries by the end of this year.

(One benefit of using eBird is receiving alerts about rare bird sightings--such as of this white-winged crossbill, Loxia leucoptera.)


Even the most experienced and knowledgeable birder may not have scientifically rigorous observation techniques, which is why eBird's creators have also tried to build in features to help "modify" users' behaviors in order to maximize data quality. For instance, they have included background information intended to educate birders about the importance of particular techniques; they have also provided incentives for being more "useful." One of the major goals is having birders report all species seen during a particular observation period, rather than just mentioning a few exciting "highlight" species. To this end, the program now includes a frequency bar chart that shows birds' seasonal patterns; this helps birders see that only complete observation reports will allow researchers to track birds' population fluctuations throughout the year. To ensure data quality, submissions are reviewed by a team of experts who identify and follow up on questionable sightings to verify their validity.

By asking birders to provide information about the time and place of each sighting, the program developers have ensured that bird observation data can be linked to a variety of other factors, including weather, land cover, stage of vegetation growth, and anthropogenic variables such as population density and traffic. None of this information needs to be provided by the birders themselves, but can be extracted from other databases established elsewhere. This is helpful not only to researchers who want to control for these environmental descriptors when using bird observation data in scientific analyses, but also to casual eBird visitors who are interested in learning more about how various factors influence the comings and goings of their feathered friends. 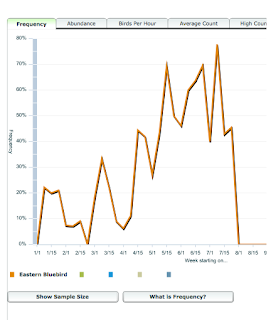 (Example of one way for eBird users to explore data collected by the program--a graph showing the frequency of bird sightings in a given area over a particular period of time; in this case, the chart shows information on observations of eastern bluebirds, Sialia sialis, in Athens County, Ohio, USA)

Perhaps one of the greatest achievements of eBird has been its ability to go global despite its developers' main interest in western hemisphere birds--an expansion that was fueled by the eBird audience. The program's creators have worked closely with allies in other countries in order to translate text into regional languages/dialects and to tailor the program "to the individual needs of a specific country or region." For instance, some countries have been more interested in creating a repository of historical observations, while others have placed an emphasis on establishing an online breeding bird atlas. Once these features were incorporated in each country's version of eBird, similar characteristics could be worked into other countries' programs, as well--ultimately making eBird more versatile and useful no matter where it was being used.

Although citizen science may not work for every research question or study system, it provides an exciting opportunity for scientists to harness the power of an army of research assistants while also getting laypeople interested in the scientific process. Technological advances--including ever-faster Internet connections and affordable portable devices--are helping "regular" people access and disseminate a variety of data at any time, in any place; programs like eBird help provide structure to this process of information exchange and improve both the quality and reliability of the output. The authors of the current paper advocate continued collaboration with a variety of experts--including ecologists, statisticians, and computer scientists--to develop additional ways to utilize this potentially powerful resource and determine the best method of "extracting biological insights" from citizen data.

Thanks to the following websites for providing the images used in this post:
http://ebird.org/content/ebird/news/rba
http://fold.it/portal/info/science
http://ebird.org/ebird/eBirdReports?cmd=Start
Posted by Caitlin Kight at 15:57