Follow-ups to previous posts: more on turbines and chimpanzees

I've recently received feedback about two Anthrophysis posts that caught the attention of outreach specialists working on related topics. Kris Hodgson, Wind Energy Community Liaison from the Wind Turbine Technician Training Program (WTTTP) at Lethbridge College (Alberta, Canada) contacted me after I wrote about how wind turbines harm bats. Kris was eager to share information about the WTTTP's efforts to educate a variety of people--from elementary school students to economic developers and policy-makers--about wind turbine energy. He sent a link to a video of University of Calgary PhD student Erin Baerwald discussing her 2008 findings regarding the barotrauma inflicted on bats by fast-whirling turbine blades. Baerwald and colleagues were among the first to use autopsies to investigate exactly how turbines cause fatalities; their results indicated that the high pressure differentials caused by the spinning blades causes blood vessels in the bats' lungs to burst, leading to death by drowning. Fortunately, Baerwald and her collaborators at the University of Calgary and TransAlta Wind conducted further research indicating that bat fatalities can be reduced at wind energy facilities if managers make minor alterations to turbine speeds and angles. Kris also described how the WTTTP is involved in efforts to provide context and perspective for "myths [associated] with wind energy production"--such as the bat and bird deaths mentioned in my previous post, and turbine-caused nausea. Anyone interested in reading more about turbines and/or the WTTTP can visit the website of the International Wind Energy Academy or  the Wind Turbine Technician Training Program.

I also heard from Sharon Dewar, public relations director for Chicago's Lincoln Park Zoo. She had read my recent article about chimps in the media, a topic of concern for the zoo's Project ChimpCARE. As part of their efforts to bring an end to "chimpanzee commercialization," the ChimpCARE team have developed a free iPad book called Chimps Should Be Chimps. Its story follows two central characters, a venerable chimp named Poe and his granddaughter, Lulu, both of whom live in a zoo. The "multisensory book" allows young readers to interact with the illustrations and find out about the natural history of chimpanzees while also learning about the unpleasant conditions faced by many Hollywood chimps. The book's authors hope that it will serve the dual purpose of making children more interested in chimp conservation and less tolerant of the use of chimps in commercial settings. The founder of Project ChimpCARE, Steve Ross, reports that the book was inspired by his struggles "to talk to [his] own kids about chimpanzees" and emphasizes that, beyond just advocating for chimps' rights, it also "conveys to kids the importance of being yourself and believing in what comes naturally to you." Those interested in the book can read more about it--and watch several behind-the-scenes videos about its creation--on its dedicated website; it can also be downloaded for free via iTunes. 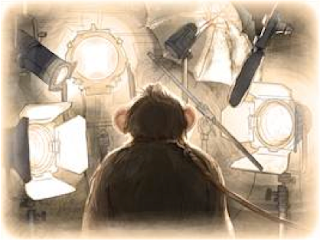 Thanks to Kris and Sharon for bringing these projects and websites to my attention. If any other readers have updates or follow-ups to previous posts, I'd love to hear about them!

---
Thanks to the following websites for providing the images used in this post:
http://www.renewablepowernews.com/archives/2212
http://www.chimpsshouldbechimps.com/