It seems that for every report praising wind turbines for offering an alternative to carbon-based energy, there is another report that the massive structures are responsible for the deaths of flying animals such as birds and bats. Although numerous studies have attempted to quantify the impact of turbines on wildlife populations by counting carcasses found at wind farms, there is still some mystery about how the impacted animals died in the first place. Did they collide with some part of the turbine, experience "barotrauma" as a result of the extreme pressure differentials caused by the fast-moving blades, or both?

A multidisciplinary group of collaborators has attempted to answer this complex question by performing thorough veterinary examinations of bat carcasses collected at the Forward Energy Center in southeastern Wisconsin, USA. The scientists, from the University of Wisconsin-Madison, the University of New Mexico, the New York State Department of Health, and the Wisconsin Veterinary Diagnostic Laboratory, were able to find 41 bat carcasses underneath 29 of the 1.5-megawatt wind turbines. In addition to collecting basic demographic information about the impacted animals, the researchers also subjected each bat to a variety of tests, including X-rays, necropsy, and histological analyses. Cumulatively, these looked for evidence of collisions (lesions and broken bones), as well as injuries sustained from barotrauma (hernias, hemorrhaging, and blood in the ear). 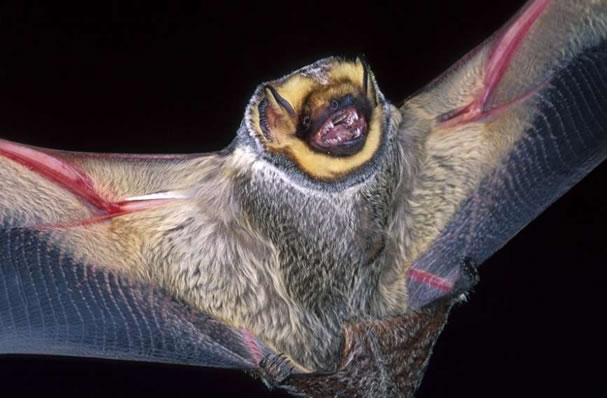 Most of the recovered carcasses were of hoary (Lasiurus cinereus; 41%) and silver-haired (Lasionycteris noctavigens; 29%) bats, though eastern red (Lasiurus borealis; 15%), big brown (Eptesicus fuscus; 10%), and little brown (Myotis lucifugus; 5%) bats were also found. Many (49%) were females, though a good number could not be accurately sexed. By inspecting the extent of bone fusion and gonad development, the researchers could tell that all the impacted bats were adults.

Nearly three-quarters of all bats had at least one broken bone and one bat had 6 broken bones. The most common injuries were fractures to the wing bones; many of these were "comminuted"--the bones had been shattered/crushed into many pieces. Other fractured body parts included the skull, scapula, lumbar vertebrae, ribs/sternum, and pelvis. Internal injuries were common, and included hernias, lung-associated lesions, and pulmonary hemorrhaging. Additionally, just over a third of animals had hemorrhaging in and around their middle/inner ears, while one bat had a ruptured tympanic membrane.


Cumulatively, these injuries indicate that bats are affected by both the turbines themselves and the extreme atmospheric conditions the whirling blades create. The anatomical location of the majority of injuries suggests that most animals were either struck from above, as the turbine blades descended, or hit from below, as they ascended; in other words, the animals were not flying head-first into the machinery. Although this may have preceded barotraumatic events--crippling the bats and preventing them from flying away from the uncomfortable pressure conditions around the edges of the blades--it is also possible that the bats experienced the barotrauma first and that the resulting damage to the inner ear impaired their navigation, leading to collisions. Interestingly, an experimental "bat drop," in which the carcasses of uninjured bats were dropped 91.44 m to the ground from the top of a turbine, found that most bats could probably survive such a fall without many injuries. This finding further supports the hypothesis that it is the combined effects of disorientation and crippling that ultimately make turbines so dangerous for bats.

During several previous studies, bats have been observed to survive an initial turbine encounter before "limping" away to, presumably, die elsewhere. This means that bat mortality at turbine sites has probably been underestimated. Currently, there are only two mitigation tactics in place to prevent bats from coming too close to turbines: acoustic deterrents and a reduction in the speed at which blades rotate. Hopefully, additional methods can be developed in the future in order to prevent injuries and death, not only to bats, but also to other winged wildlife.


Thanks to the following websites for providing the images used in this post:
http://www.euinfrastructure.com/news/gaelectric-investing-22-million-in-ni-wind-farm/
http://www.nenature.com/HoaryBatPhoto.htm
http://dwrcdc.nr.utah.gov/rsgis2/search/Display.asp?FlNm=lasinoct
Posted by Caitlin Kight at 04:35