Of all the domestic animals that can potentially harm wildlife, cats (Felis catus) may be the most problematic. They are thought to kill billions of wild birds each year, along with many other small prey, such as mice and voles. In so doing, they steal potential food resources from other wild animals--including mammalian, avian, and reptilian carnivores. Additionally, cats may hybridize with close relatives, including wildcats (Felis silvestris) and other small feline species such as the Iberian lynx (Lynx pardinus)--the latter of which is considered by some to be the most critically endangered wild cat in the world. When they encounter other animals in the wild, cats can pass on infectious diseases, such as feline immunodeficiency virus and feline leukemia virus.

(Feral cat, Felis catus, the state of whose ears is evidence of how rough life can be on the streets)


Domestic cats are present on all continents and on a number of islands. They are particularly common in urban and suburban areas, and are generally found near human establishments. Feral cats can exist in staggering numbers; in the U.S. alone, there are thought to be some 30 million cats living in the wild. Many of these may receive some food support from humans, either through direct feeding or in the form of garbage that can be picked through for tasty leftovers. Where this does not happen, however, the animals may have quite large home ranges over which they travel in search of sustenance. This can interfere with conservation efforts when the cats' wanderings take them through natural areas inhabited by protected animals upon which they might prey, or other feline species with which they can interbreed.

One such area is the Moura-Barrancos Nature 2000 site in southeastern Portugal, near the Spanish border. Part of this habitat has been named as a Bird Special Protection Area; it is also one of the few remaining places where Iberian lynx can be found in Portugal. In order to understand the impact that domestic cats might have on native animals living in the Nature 2000 site, collaborators from the Centro de Biologia Ambiental, the Estación Biológica de Doñana Consejo Superior de Investigaciones Científicas, and the Universidade de Aveiro Campus Universitário de Santiago undertook a study in which they investigated the natural and anthropogenic factors associated with the presence, abundance, and use of space by domestic cats. The researchers used a combination of live-trapping, photo-trapping, and radio-tagging techniques in order to determine where cats were living and how far they roamed. To characterize the areas inhabited by feral cats, the scientists collected data on a variety of habitat variables (including type of land cover, slope of terrain, and the presence of roads and rivers), as well as performing survey transects in order to determine what other carnivores could be found within each cat territory. 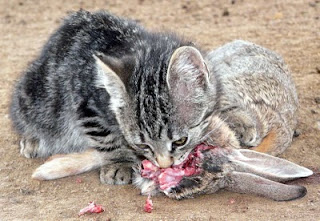 (Feral kittens may look cute and innocent, but even they are capable of impacting local wildlife populations.)

Although the Nature 2000 site does not contain any villages, 128 traditional farms are scattered throughout the area. The bulk of these (67.2%) have no residents, and many are abandoned or in complete ruin. No cats were found at these farms, or in the secluded natural areas surveyed by the researchers. On the other hand, cats were easily detected and captured at active farms--specifically, 130 cats were found across the 42 active farms, yielding a density of 0.26 cats per square kilometer. Among cats that could be sexed, there were about twice as many females as males. None of these individuals was deliberately kept as a pet, and none received veterinary attention; however, approximately 85% of these animals were occasionally given food by people at the farms. Despite this, all but one of the cats was described as "very wary" and could not be closely approached or caught by hand.

The researchers constructed mathematical models investigating which habitat characteristics were most closely associated with the presence of cats. The best model describing patterns across all territories combined indicated that cats were likely to be found where there were both people and habitat characteristics that represent the suitability of habitat for anthropogenic use (including both roads and rivers). On a per-farm basis, cat presence was (unsurprisingly) associated with the presence of, and food supplementation by, people.

Eight of the live-trapped cats (5 males and 3 females) were given radio collars prior to release. The resultant tracking data indicated that each cat's home range included the farm where it was captured, and was centered on farm buildings. Male home range sizes were nearly 5 times as large as those of females--not surprising given that they roam far and wide, particularly during the mating season, in order to find females. One male traveled as far as 6 km, but in general the cats did not move more than 3 km at a time; multiple farms were used as "stepping stones" when the animals moved long distances. During their movements through the habitat, cats preferentially spent time in human areas and flat sites within 200 m of roads. Conversely, they avoided steep areas that were far from roads and covered with natural vegetation. Daily movements were most closely associated with the probability of encountering red foxes (Vulpes vulpes), which cats avoided out of fear of predation.

(During encounters like these, feral cats can transmit diseases such as feline immunodeficiency virus and feline leukemia virus, which they can also pass on to wildlife.)


The results of the study consistently indicated that, despite their ability to fend for themselves, domestic cats did not live independently of humans--or, if they did, were present in very low numbers. However, even though they were closely associated with anthropogenic areas, cats often passed through natural habitats during their daily travels or when roaming to find mates. These findings have two major conservation implications. First, cat management efforts should be focused on human settlements, since this is where cats are most likely to be found in high numbers. A combination of techniques may be useful for curtailing feral cat populations--including outlawing feeding, preventing access to refuse, neutering males, increasing the number and size of natural vegetation patches, and promoting the presence of natural competitors such as foxes. Second, planners should consider the impacts of erecting anthropogenic structures in or near natural areas, since these will likely attract feral cats and/or act as stepping stones, linking otherwise unconnected cat habitats and facilitating spread of the animals into new areas.

The authors also emphasize the importance and utility of education as a conservation tool. For instance, farmers should be encouraged to provide habitat for barn owls (Tyto alba), which, like cats, help control rodent populations--but which, unlike cats, are a native species.


Thanks to the following websites for providing the images used in this post: