What we can learn from the West Nile Virus epidemic

The U.S. has seen its fair share of invasive pathogens over the years, resulting in major economic and ecological costs associated with harm to humans, livestock, and wildlife. One recent example is West Nile Virus (WNV), a pathogen that was first isolated in Uganda in 1937 and made its way to North America in 1999, probably by way of the Middle East.

(Schematic showing transmission of West Nile Virus. Click on the image for a larger view.)


Writing in the latest issue of Science, infectious disease ecologist Dr. A. Marm Kilpatrick (University of California--Santa Cruz) says that there is much to learn from the history of WNV. In particular, he emphasizes the relationship between globalization, urbanization, and infection, and suggests that a better understanding of the interrelatedness of these factors could help us pinpoint important areas for future research, as well as develop more effective prevention plans for other pathogens that might appear in the future.

Historically, Kilpatrick writes, many historical pathogenic invasions have occurred as a result of trade and travel--including malaria, dengue, HIV/AIDS, anthrax, rinderpest, rabies, chestnut blight, potato blight, and sudden oak death, to name a few. Modern levels of globalization, and the connectedness it brings, only serve to increase the likelihood of future invasions. Although a majority of pathogens have followed an East-to-West trajectory, there is no reason to think that New World diseases won't one day cause more problems in the Old World. (Potato affected by the potato blight (aka "late blight"), caused by the protist Phytophthora infestans, which traveled from the Old World to the New in the mid 19th century)

Where it is present in the tropics, WNV is associated with longer transmission seasons and, occasionally, increased transmission intensity. This, Kilpatrick says, is related to the fact that the virus is spread by mosquitoes (the viral vector), which develop faster and, cumulatively, bite more often in tropical areas. Similar trends have been found for other vector-borne diseases in the tropics, indicating that introduction of invasive pathogens to these areas could be quite damaging. Strangely, though, reports of sickness and death are not as high in tropical regions as elsewhere--an intriguing pattern that awaits explanation. A better understanding of these issues would be useful for predicting the potential impacts of climate change on both the spread and impact of diseases.

Throughout the range where WNV is currently found--it is endemic to tropical Africa, southern Asia, and northern Australia, is episodically transmitted in Europe, and, of course, is now found in North America--there are a variety of mosquitoes (Culex spp.) that act as vectors. Where these overlap in range, some are more effective vectors than others, and this is is not always related to abundance of the insects or the frequency of their interactions with the animals that eventually become ill. For instance, Culex pipiens and Culex restuans appear to be responsible for the majority of human infections in many regions of the U.S. despite the fact that these mosquitoes generally prefer to feed on the blood of non-humans. In order to develop effective prevention and mitigation plans, it will be critical to understand the respective impacts of different vector and host species. To achieve this, Kilpatrick suggests that scientists will need to simultaneously collect data on mosquito feeding patterns and host abundance from the same place and time; similar data are needed for other invasive pathogens. Unsurprisingly, this information can be difficult to obtain, particularly in the case of diseases whose transmission routes are not yet well understood. (Mosquito taking a blood meal from a human)

Although mosquitoes are the vectors of WNV, the predominant carriers of the disease are birds, millions of which died following introduction of the virus to North America. In some areas, this had a significant impact on avian populations--many of which have yet to rebound. Further observations will be needed to document how long it takes for the birds to recover, if they ever do. These data will be useful for understanding the timescale over which not just WNV in particular, but also invasive pathogens, in general, are capable of reshaping wildlife assemblages and, potentially, impacting ecosystem function.

During the early stages of the North American WNV epidemic, crows and house sparrows (Passer domesticus) were frequently identified as the most infectious animals--not unsurprising given the importance of these animals during WNV outbreaks in the pathogen's native range. However, Kilpatrick reports that recent work has found that the American robin (Turdus migratorius) is an important vector despite the fact that it is neither as abundant nor as widespread as the other two types birds; what it lacks in presence, it makes up for in attractiveness to mosquitoes. Robins are currently 50-100% more common now than they were just 25 years ago, thanks to the fact that they thrive in (increasingly common) urban areas. This raises the question, would WNV have spread as easily and/or as quickly in the absence of land use changes associated with human development? Further, in what other ways might anthropogenic changes impact pathogen invasion--and what other pathogens might be aided? Answers to these questions could facilitate "ecologically based land-use planning," which could minimize the threat of dangerous pathogens. 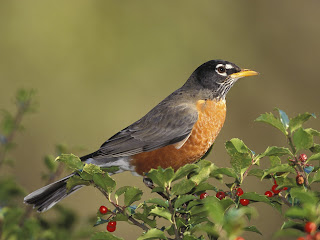 
A locally evolved WNV genotype appeared within 2 years of the pathogen's arrival in the US, and after only 4 more years it had become the dominant strain; the new genotype did so well because it improved transmission efficiency. Pathogen evolution is a well-documented phenomenon common to many infectious diseases, but what is less well studied is any potential evolution of resistance to WNV in North American birds. Kilpatrick advocates a better understanding of these dynamics in order to improve the accuracy of predictions about the long-term effects of WNV on wildlife populations.

Perhaps one of the biggest remaining questions about WNV is whether we're in the clear, or whether a new, and potentially worse, epidemic might arise in the future. With WNV, as with other pathogens, it is difficult--if not impossible--to guess when an outbreak will occur, where and when it will happen, and how far it will spread. However, Kilpatrick writes, in-depth studies of individual outbreaks may increase our ability to model disease spread and, therefore, predict what will happen when future epidemics emerge. Disease models might be particularly useful for improving urban design and travel and trade practices--thus minimizing the transmission and spread of new and dangerous pathogens.